Middle East and African carriers expanding their fleets in 2010 and beyond: Share Wrap

All of the listed Middle Eastern airline shares were lower yesterday, with Jazeera down 2.0%, Kuwait National Airways slipping 1.8% and Air Arabia 1.1% weaker. Among the African carriers, Kenya Airways’ shares slipped 0.9%, while shares in 1time Holdings gained 2.2%.

Several Middle Eastern and African carriers have been in the news this week, with a series of aircraft orders and/or confirmations, aircraft deliveries and aircraft leasing news (some of which has been associated with the Bahrain International Airshow), as follows:

The Word Bank commented, “the overall strength of the recovery will depend on the growth performance in key export markets and investment partners, particularly the United Sates, the European Union, and China”. The recovery in sub-Saharan Africa “is projected to be modest and fragile.”

Meanwhile, per-capita income in sub-Saharan Africa dropped for the first time in a decade in 2009, with an additional 7 million people falling into poverty. 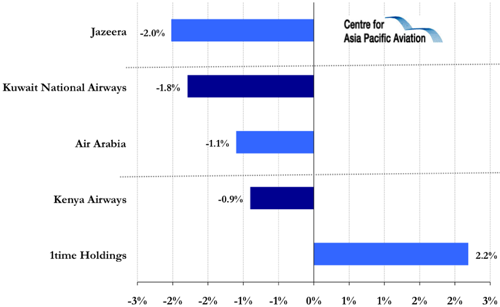