In Nov-08, one dollar in every eight spent on premium air fares across the world involved Middle East travel - compared to one in twelve just a few months earlier.

The Middle East economy remains relatively strong and the region's Business and First travel demand has held up better than others to date. 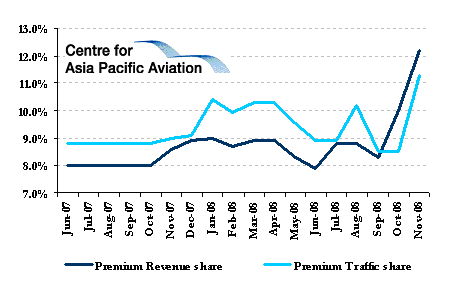 While a couple of months do not constitute a trend, the evolution suggests the emerging Middle East sixth freedom airlines are living up to their potential to become powerful forces in global aviation, directing increasing amounts of sixth freedom and origin-destination traffic over their hubs.

This is an extract from the soon-to-be-published 2009 edition of the Centre's free Middle East Aviation Outlook report. To pre-order your free copy, please click here.