It appears as if COVID-19 has ushered in some consolidation in Mexico’s market, but not in the traditional forms of mergers and acquisitions. Even before the COVID-19 crisis, there were calls for consolidation of airlines in Mexico.

The market shifts have occurred due to the shrinking of two of country’s larger airlines in the wake of the pandemic. A form of unconventional consolidation has occurred, and Mexico’s ultra-low cost carriers are the biggest beneficiaries.

As a result of the changes, and as the aviation industry looks toward recovery, Mexico’s market composition could ultimately feature two ultra-low cost operators and one full service airline.

The COVID-19 pandemic reverses the fortunes of Aeromexico and Interjet

Before the coronavirus crisis struck Mexico, Aeromexico CEO Andrés Conesa said that there was aggressive capacity growth in the Mexican market, particularly among low cost airlines.

He stated that, given the outsized growth and Mexico’s sluggish economy, “the only way to be able to fill those seats is by putting pressure on prices. We continue to be of the view that we will see consolidation soon in the market, because there’s no way this can continue going forward.”

After that pronouncement, in Jun-2020 the pandemic forced Aeromexico to seek Chapter 11 bankruptcy protection and challenges intensified for Mexico’s hybrid airline Interjet, which has not been in regular operations since Dec-2020.

The majority of Interjet's Airbus A320s exited its fleet in 2020, and before the crisis the airline was dealing with maintenance issues on its fleet of Sukhoi Superjet 100s.

CAPA’s fleet database shows that, as of late Feb-2020, Interjet had 24 Superjet 100s that were inactive.

Volaris and Viva Aerobus seize on challenges faced by their competitors

Although Mr Conesa singled out the growth of low cost operators as problematic in Mexico’s market, those airlines have been the biggest beneficiaries of Aeromexico’s and Interjet’s challenges. One of Mexico’s ultra-low cost airlines, Volaris, has calculated that the total fleet among Mexico’s airlines dropped from 355 in Dec. 2019 to 212 in Dec. 2020.

“Over one-third of Mexico’s fleet is coming off-line, creating a massive opportunity for Volaris to take share,” the airline recently concluded.

Data from Mexico’s SCT (Secretariat of Communications and Transportation) show that Volaris’ share of domestic passengers transported in 2020 grew to 38%, from 31% in 2019. Mexico’s other ultra-low cost operator, Viva Aerobus, increased its domestic share from 20% in 2019 to 24% in 2020.

Despite rightsizing in Chapter 11, Aeromexico’s share of the domestic market remained consistent, bumping to 25% for 2020, compared with 24% in 2019.

Of course, the share shift is off a much smaller base, as Mexico’s domestic passenger levels fell by 47% year-on-year in 2020, to 28 million.

Even as the market recovery in Mexico seems somewhat jagged, Volaris and Viva Aerobus remain bullish on their prospects, particularly at Mexico City Juarez International airport, historically congested, which resulted in low cost airlines facing difficulties in gaining a foothold at the facility.

Now shifts in Mexico’s market have created a window of opportunity for those airlines in Mexico City, and both Volaris and Viva Aerobus have made a push from the airport on domestic and international routes.

Viva Aerobus has concluded that Mexico City is a key destination for the airline, and Volaris CEO Enrique Beltranena told attendees at the Routes Reconnected conference in 2020 that the airline had a “once in a lifetime” chance to expand from Mexico City – due to slots opening up as a result of Aeromexico’s and Interjet’s financial issues.

Both Volaris and Viva Aerobus are entering into larger, more contested markets on US transborder routes. For example, each airline has added flights from Mexico City to Houston Intercontinental airport during the past few months, which is a route also operated by Aeromexico and United airlines, and previously served by Interjet.

“What we looked at is where there were capacity gaps left behind by some of the struggling competitors”, Volaris EVP of airline and commercial Holger Blankenstein recently told analysts and investors. “And we found that mostly in the large markets, there would be an opportunity”, he added.

Mr Blankenstein said that as Volaris becomes “the largest player in Mexico and we are growing in Mexico City, naturally we will add some of those larger O&Ds [origin and destinations markets] from Mexico City.”

Data from CAPA and OAG show that Aeromexico represents approximately 40% of the airports system ASKs, followed by Volaris at 20% and Viva Aerobus at 9%. 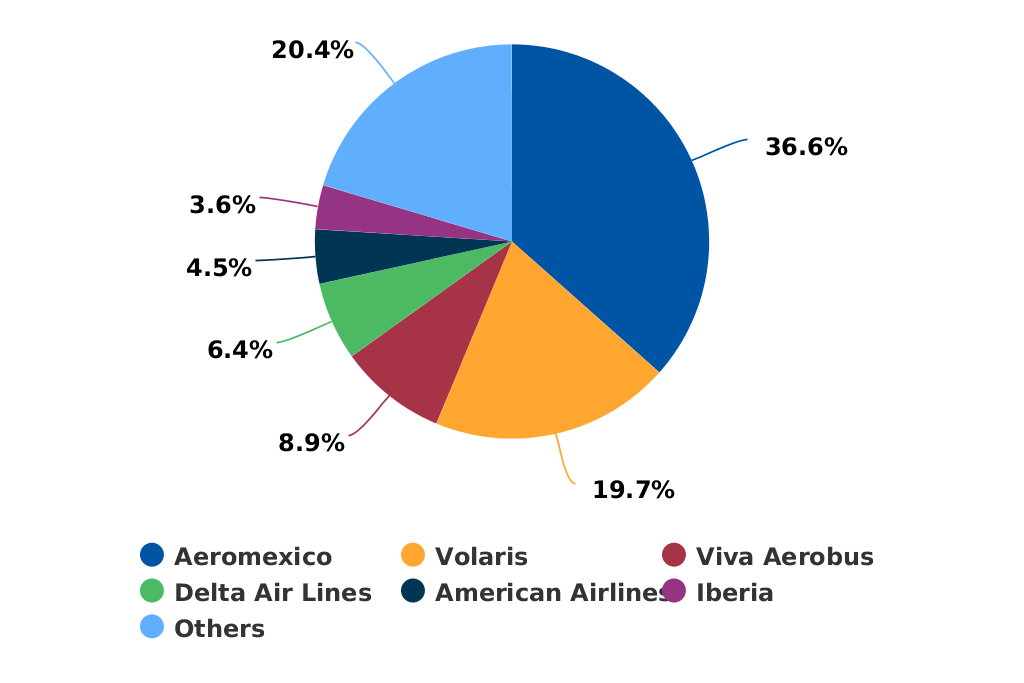 But there is little doubt what the equity markets think about Mexican airline prospects.

Volaris is performing near its five year high.. 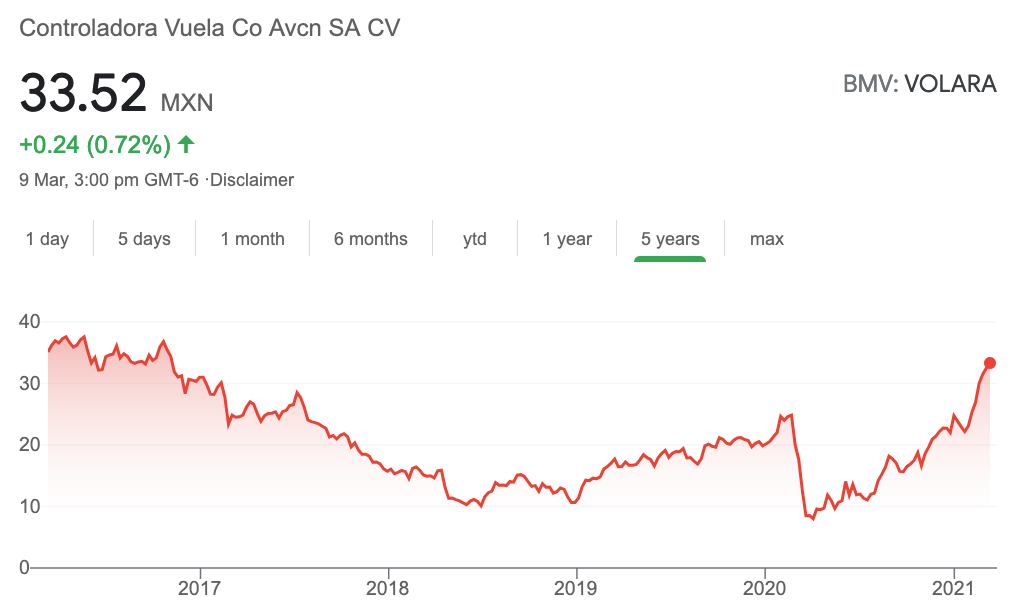 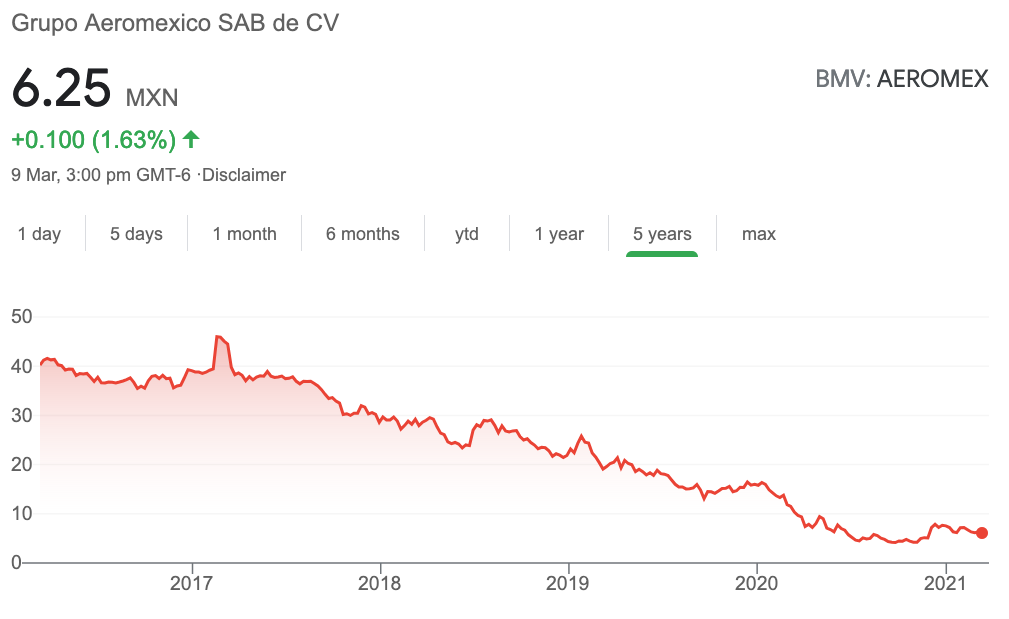 It remains an unknown whether Interjet will be revived, but the odds look somewhat slim.

If the airline does not restart operations, then the composition of Mexico’s domestic market will largely consist of two ultra-low cost operators, Volaris and Viva Aerobus, and one full service contender, Aeromexico.

As Mexico joins countries worldwide in navigating a recovery from the COVID-19 pandemic, the market rationalization that is occurring should allow airlines to capture returning demand at price points to bolster their financial positions, unless the airlines left standing engage in ramping up capacity too quickly.

Mexico is not the only market undergoing the significant change that has stemmed from the COVID-19 pandemic.

But it is one market where ultra-low cost operators have benefitted significantly from the misfortunes of their competitors, and there’s no shortage of ambition among Mexico’s ULCCs as market dynamics change.