Air Mauritius has returned to profitability and is keen to pursue expansion in support of an ambitious hub strategy by its government shareholder. The airline turned an EUR18 million operating profit in the year ending Mar-2016 as passenger numbers grew by 9.4% - representing the fastest growth in five years.

Mauritius is geographically well positioned to attract sixth freedom traffic between Africa and Asia, a fast-growing market. However, competition is intensifying in the Africa-Asia market and in Mauritius, which could make it difficult for Air Mauritius to succeed at developing a new east-west hub while maintaining its new-found profitability.

This is the second part of an analysis report on Air Mauritius and the Mauritius market. The first report looked at Air Mauritius' expansion in Asia, and the need to bolster its network in continental Africa in order to secure more sixth freedom traffic between Asia and Africa. It also examined the impact of AirAsia X’s Oct-2016 launch of services to Mauritius. In this half of the report CAPA will look in more detail at the intensifying competition in the Mauritius market; how this may impact Air Mauritius’ new-found profitability and its ability to further develop an Africa-Asia hub.

Mauritius is an open market and welcomes new entrants. While AirAsia X creates a new challenge for Air Mauritius in the Mauritius-Asia market (including China), its arrival will boost the local economy and efforts to develop Mauritius as a hub. AirAsia significantly improves Mauritius’ connectivity to East Asia, eliminating the need to backtrack through Dubai for several city pairs.

The arrival of AirAsia X is just the latest in a string of recent developments that have resulted in more competition for Air Mauritius in its home market. In recent months Emirates has begun deploying its new high density 615-seat A380s on its two daily Mauritius flights, resulting in a nearly 20% increase in capacity compared with the 518-seat A380s previously used on the Dubai-Mauritius route.

Emirates has been one of the key drivers of passenger growth at Mauritius in recent years, along with expansion from European leisure airlines. Total passenger traffic in Mauritius has grown by nearly 20% since 2012. 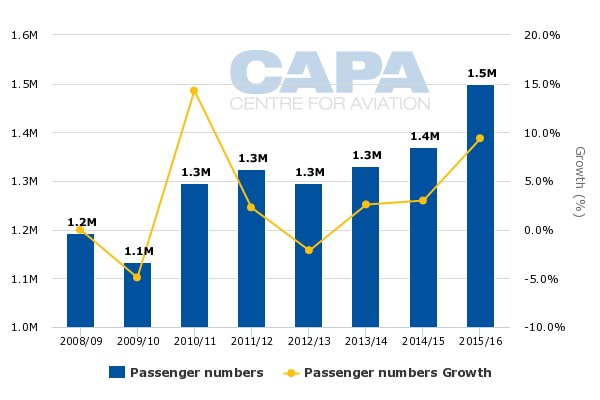 Mauritius is primarily an inbound market with 1.152 million visitor arrivals in 2015 compared with only 254,000 departures by Mauritian residents. Almost all passengers arrive by air; there were only slightly more than 40,000 arrivals by sea in 2015. Of the 1.152 million visitors, 1.078 million or 94% visited Mauritius as a holiday destination.

Paris is Air Mauritius’ largest destination as it is served daily, with additional frequencies during peak periods. Paris is a large local market with most transit traffic connecting to other destinations within the Vanilla Islands. London Heathrow – its only other European destination – is served four times per week.

Air Mauritius currently has more capacity to Europe than to Asia Pacific, although it has 12 destinations in Asia Pacific compared with only two in Europe. 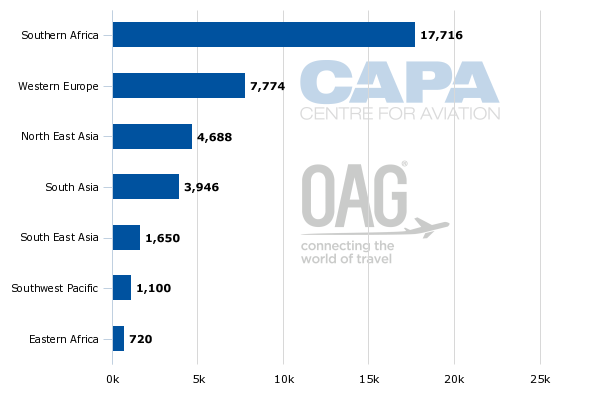 But Asia and Africa are where the opportunities are

Air Mauritius is considering expansion in Europe, with Amsterdam a potential third European destination. However, its focus is primarily on Asia and Africa expansion.

Asia and Africa are the larger growth markets for the Mauritius tourism sector – although visitor numbers from Europe continue to increase. Mauritius is also geographically well positioned for Asia-Africa transit traffic while it is not positioned for Europe-Africa traffic (except for connections within the Vanilla Islands).

Air Mauritius is now a relatively small player in the wider Asia-continental Africa market – a market dominated by Ethiopian Airlines, Kenya Airways and the Gulf airlines. Air Mauritius accounted for less than 6% of total Africa-Asia bookings in the year ending 31-Mar-2016, according to OAG Traffic Analyser data. Emirates was the market leader with a 22% share, followed by Ethiopian with a 16% share and Qatar Airways with an 11% share. 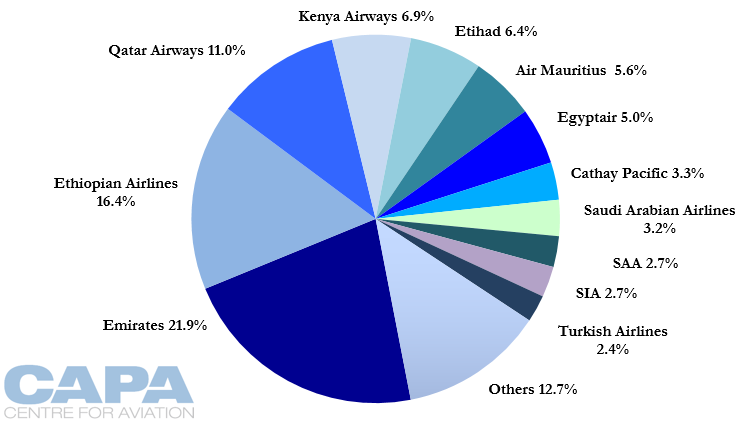 Air Mauritius has already experienced yield erosion as competition has intensified in its home market. As it starts to pursue more sixth freedom traffic, maintaining profitability may be difficult.

Air Mauritius was back in the black in FY2015/16 after a difficult FY2014/15, with an operating profit of EUR17.6 million and net profit of EUR16.5 million. Lower fuel prices were a contributor, partially offset by fuel hedges and depreciation of the Euro. 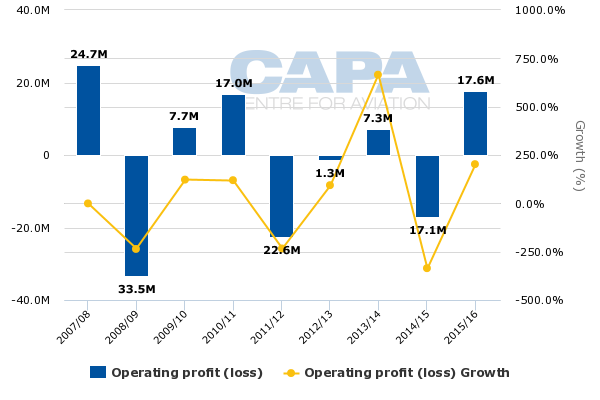 As the above chart highlights, Air Mauritius has had trouble maintaining consistent profits over the past several years. Economic downturns in Europe – which has historically been its main market – and new competition have often driven a decline in profitability, and prompted network adjustments.

Intensifying competition is again a concern. In its Jun-2016 annual results announcement Air Mauritius warned that it faces “an intensification of competition … as the result of further air access granted to new sixth freedom airlines, low cost and seasonal charter airlines. This is resulting to an oversupply of seat/cargo capacity in an already price sensitive market entailing further yield dilution”.

AirAsia X will not be the first long haul LCC to serve Mauritius; Eurowings launched flights from Cologne in May-2016. The new sixth freedom airline referred to by Air Mauritius is likely Turkish Airlines, which launched services to Mauritius in Dec-2015.

Turkish is now serving Mauritius with three weekly A330 flights but will add two more frequencies (for a total of five) at the start of the northern winter season in late Oct-2016. As Mauritius-Turkey is a small local market, Turkish Airlines is relying heavily on European connections – as does Emirates, although Emirates also benefits from being the only airline in the Mauritius-Middle East market.

Air Mauritius' yields weakened in FY2015/16 as a 9.4% increase in passenger traffic outstripped a 5.4% increase in revenues to EUR490.8 million. Air Mauritius said in its FY2015/16 financial results announcement that measures are now being pursued to ensure continued improvements to its profitability despite the new competitive pressures.

While Air Mauritius is obviously impacted by the intensifying competition it is keen to partner with more airlines that serve Mauritius, recognising that its hub aspirations cannot be achieved alone.

Air Mauritius accounts for slightly less than a 50% share of international seat capacity in its home market, but when its codeshare partners are included its capacity share increases to approximately 90%. Air Mauritius currently has 10 codeshare partners, including five that serve Mauritius: Air Austral, Air France, Air Madagascar, Emirates and South African Airways (SAA). As outlined in the earlier table, Emirates, Air Austral, SAA and Air France are the four largest foreign airlines in the Mauritius market.

The Emirates partnership includes codesharing on the Emirates-operated Mauritius-Dubai route and six short haul routes beyond Dubai. The partnership was expanded in May-2016 to include frequent flyer reciprocity.

In addition to this partnership providing it with offline access to destinations it does not serve, Air Mauritius is content with allowing partners to access its network beyond Mauritus. This is a sensible approach as it supports the overall hub ambitions of the Mauritian government.

Air Mauritius also lacks the fleet to operate a large network on its own, and therefore needs to be supportive of more foreign airlines entering its home market – ideally becoming partners. New, or more intense, competition obviously can have an impact, but overall the benefits of more airlines serving Mauritius (or existing airlines adding capacity) are positive for the country, the airport and – in most cases – the airline.

Air Mauritius to renew the fleet

Air Mauritius currently operates 13 aircraft, which is the same number of aircraft that it operated three years ago. The focus so far has been on renewal, rather than growth.

Fleet renewal should help the airline reduce its costs while improving its product in a highly competitive market. Air Mauritius ordered six A350-900s in 2014, which will be delivered from Oct-2017 and used to replace its six A340s.

At least for now the airline plans to continue operating its two A330-200s, which are currently used on the Singapore/Kuala Lumpur route, Hong Kong, Delhi and Mumbai, while the A340s are used for the other Asia Pacific routes and Europe. (One of the four Mumbai flights also uses A340s; widebody aircraft are also used on some regional flights to Johannesburg, Madagascar and Reunion Island.)

Air Mauritius may ultimately acquire more A350s to support its long haul growth. It has not grown its widebody fleet in several years.

However, a decision on renewal and expansion of its narrowbody fleet is now more pressing. Air Mauritius has only two A319s, used on African routes; both of these aircraft are 14 years old. Air Mauritius also operates three ATR 72-500 turboprops – the third aircraft has just been delivered, in Jun-2016 – which are used on its lone domestic route and on some flights to two airports on Reunion Island.

Air Mauritius will require a larger fleet and strategic partner

Ultimately Air Mauritius will need a significantly larger fleet to support the ambitious hub aspirations of its government shareholder. Foreign airlines will continue to help drive growth at Mauritius but a much bigger Air Mauritius is required if the country is to succeed at becoming a bridge between Asia and Africa.

However, fleet expansion is expensive and risky. It is unclear whether the Mauritius government is willing to make such a big investment – despite the clear hub aspirations.

The ideal solution would be to secure investment from a potential new strategic airline partner.

Finding such a partner will not be easy, particularly as most of the potential suitors already have a big slice of the Africa-Asia market and may consider Mauritius too small a market to warrant their attention. But it is a changing world and new aspirations emerge constantly.