MAS will achieve its targeted 12% capacity reduction by February, to the delight of Gulf carriers

Gulf carriers and AirAsia will likely emerge as the main beneficiaries of the network restructuring at Malaysia Airlines (MAS). The Malaysian flag carrier has selected several routes to discontinue by early next month, resulting in a 12% reduction in system-wide capacity as it begins implementing its new business plan.

Routes to Europe, the Middle East, South Africa and South America will account for most of the capacity decrease stemming from MAS’ route rationalisation initiative. Gulf carriers, particularly Emirates, will benefit as MAS drops Dubai and stops competing with Emirates in several other markets such as Rome, Buenos Aires, Cape Town and Dammam.

MAS is also cutting several short-haul international routes which AirAsia already operates on or is likely to now launch. MAS and AirAsia agreed to a landmark share swap and cooperation deal in Aug-2011, which subsequently prompted MAS to decide to focus more on the premium end of the market.

MAS early last month unveiled its new business plan, promising to reduce system-wide ASKs by 12%. The capacity reductions are designed to improve the carrier's load factors and yields with a projected impact on the bottom line of MYR220 million (USD70 million) to MYR302 million (USD96 million) in 2012.

The flag carrier initially earmarked two routes – Kuala Lumpur-Cape Town-Buenos Aires and Kuala Lumpur-Johannesburg – to be axed. Those reductions, as CAPA initially reported early last month, will result in a 5% reduction in ASKs. The last MAS flight from Johannesburg, which MAS now serves three times per week with Boeing 777s, will operate on 31-Jan-2012 while the last flight from Buenos Aires via Cape Town, which is operated twice weekly with 747-400s, will operate on 01-Feb-2012.

Emirates and other Gulf carriers also have been undercutting MAS on its European routes, which have been highly unprofitable over the last several months. Emirates, Etihad and Qatar Airways combined now offer almost 40,000 weekly seats to and from Kuala Lumpur. All three carriers offer one-stop connections from Kuala Lumpur to Dammam, Karachi, Cape Town and Johannesburg. Emirates and Qatar also serve Rome and Buenos Aires.

The Dubai, Rome, Dammam and Karachi cuts will result in a further 4% reduction in total ASKs, according to data from Innovata. Combined with the Buenos Aires, Cape Town and Johannesburg cuts, MAS will reduce capacity by more than 9% across its Europe, Middle East, Africa and South America networks.

MAS also has unveiled plans to axe four regional international routes from its secondary hub in Kota Kinabalu which will result in a further 2% reduction in total ASKs. The final 1% reduction in ASKs (for the total 12% target) will be achieved by cutting Kuala Lumpur-Surabaya, Kuala Lumpur-Bandung and Langkawi-Penang-Singapore.

MAS has already operated its last flights to the Indonesian cities of Bandung, which was only launched in mid-2010, and Surabaya. The last flight on the Langkawi-Penang-Singapore route will operate at the end of this month. MAS served each of these routes with four to seven weekly frequencies.

AirAsia is the main beneficiary of all three of these cuts as it already operates all the affected routes. The AirAsia Group, including AirAsia Indonesia, serves Kuala Lumpur-Bandung with three daily flights and Kuala Lumpur-Surabaya with five daily fights. It is the only player on both routes.

AirAsia also operates three daily flights on Penang-Singapore but competes against three other carriers on this route: Jetstar Asia, Tiger Airways and SilkAir. AirAsia and SilkAir also operate Langkawi-Singapore, where they already had an advantage over MAS because MAS now serves the route with a one-stop product.

MAS route cuts to be implemented by early Feb-2012

The MAS cuts at Kota Kinabalu leave the airport without any service to Tokyo (either Haneda or Narita), Osaka and Perth although the Seoul route will continue to be served by Asiana and Korean Air. AirAsia also has its second largest Malaysian base at Kota Kinabalu but currently does not serve any of the four affected routes. The low-cost carrier will likely pick up at least some of the routes as they are all in narrowbody range (unlike Kuala Lumpur, Kota Kinabalu can be served from North Asia with A320s or 737s).

AirAsia is already the largest carrier at Kota Kinabalu with a 52% share of total capacity (seats) at the airport, including a 54% share of domestic capacity and a 43% share of international capacity. 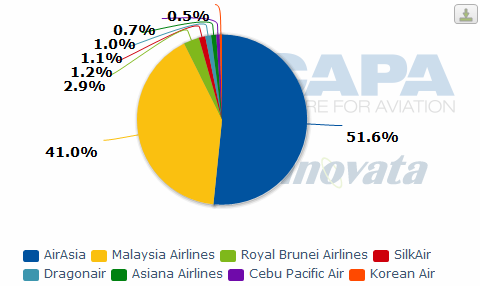 AirAsia’s market share in Kota Kinabalu is expected to increase as MAS reduces its presence. MAS’ reduction in international capacity at Kota Kinabalu makes sense given its new premium-focussed business plan because Kota Kinabalu routes tend to have a larger leisure component than the same routes from Kuala Lumpur. Kota Kinabalu is the biggest city in eastern Malaysia and the state of Sabah, a popular eco-tourist destination.

MAS had been operating almost 8000 international weekly seats and 22.7 million international ASKs at Kota Kinabalu, according to Innovata data. The four route cuts account for over 16 million ASKs, or almost 70% of MAS’ international capacity at the airport. MAS will continue to operate two international routes from Kota Kinabalu – Hong Kong and Taipei – both of which are served daily with 737-400s.

MAS to increase capacity on some Asian routes

While MAS is drastically reducing its regional international network from Kota Kinabalu, the carrier is planning to increase its Asian capacity from its main Kuala Lumpur hub as part of its new business plan. MAS sees growing demand on Asian routes, including in the premium sector, as income levels in Asia are on the rise.

The carrier has already announced plans to increase capacity on several Asian routes from Kuala Lumpur. But the increases will not take effect until the Northern Hemisphere summer season, which begins in late Mar-2012.

The biggest capacity increase will occur on Kuala Lumpur-Beijing, where MAS will add a second daily 777-200 flight, providing an additional 1974 weekly seats. Kuala Lumpur-Beijing is now a relatively underserved market with only one daily 777 flight from MAS, five weekly 757 flights from Air China and one weekly 767 flight from Air Zimbabwe (when operating normally). The increase in capacity by MAS in Beijing means AirAsia X is unlikely to launch services there, where it has had trouble securing slots and traffic rights. AirAsia X currently serves the nearby port city of Tianjin with four weekly A330 flights.

Also from late March, MAS is adding a third daily flight to Manila, two extra weekly flights to Jakarta and Phnom Penh and one extra weekly flight to Bangkok and Medan. All of the additional Asian flights will result in a system-wide capacity increase of almost 3% at the end of Mar-2012. This will be partially offset by a reduction in capacity at Taipei as MAS downgauges three of its seven weekly flights on the Kuala Lumpur-Taipei route from 777s to 737-800s (resulting in a 0.2% reduction in system-wide capacity).

The adjustment in Taipei coincides with moving the stopover on MAS’ Los Angeles flight from Taipei to Tokyo. MAS currently serves Los Angeles three times per week via Tapei but at the end of March will begin serving Los Angeles as part of a new four times weekly 777 flight on a Kuala Lumpur-Tokyo-Los Angeles routing. The carrier’s capacity on the Kuala Lumpur-Tokyo route, which is now served twice daily, is not expected to change. While the carrier’s trans-Pacific seat capacity will increase by 33%, the weekly ASK impact will be minimal because Tokyo is about 20% closer to Los Angeles than Taipei.

The decision to switch the stopover on MAS’ only US route to Tokyo could be an alliance response. MAS will have the benefit of having a partner in Tokyo from late next year, when it enters oneworld. JAL is a oneworld member.

Further capacity adjustments, which are expected later in 2012, will also likely follow alliance lines. For example, MAS is expected to increase capacity in 2H2012 to British Airways’ (BA) London Heathrow hub as at least one of MAS’ two Heathrow flights are upgraded to the A380, although this had been planned prior to MAS joining oneworld. BA and MAS are now talking about forging a codeshare partnership.

While capacity to London may increase, other European cities that do not have oneworld hub status may see a capacity decrease. While not yet detailed, MAS will likely cut capacity on several of its remaining long-haul routes to Europe and possibly to Australasia. Some of these cuts will likely be implemented at the end of March because MAS needs to reduce capacity on some routes to offset the planned capacity increases on Asian routes and ensure overall capacity remains flat after the 12% targeted ASK reduction is achieved in early February.

Cuts to Australia, however, are not expected to be significant as MAS is now discussing a potential partnership with oneworld member Qantas, which is sponsoring MAS’ entry into oneworld. (There too AirAsia could benefit via its AirAsia X operation.) As CAPA reported last month:

Qantas, which does currently not serve Malaysia, is one of several potential joint venture partners for MAS. The carrier says it is now “exploring JVs with selected partners” as part of its new focus, as identified in the new business plan, on alliances and partnerships. Australia and New Zealand now account for 22% of MAS’ international ASKs, while Europe accounts for 29%. Asia, where a slight increase in capacity is expected, accounts for 39% of total international ASKs. The carrier also has a large domestic operation, accounting for 48% of total seats, but on an ASK basis the domestic flights only account for 12% of total capacity.