Shares in Macquarie Airports fell 2.5% yesterday following the release of its 1H2009 financial results, while Vienna Airport’s shares fell 2.3% after it reported revenue declines of over 10% also in 1H2009.

Macquarie Airports lost the ground it gained on the previous trading day (+2.6%) after reporting 4.3% reductions in 2Q2009 and 1H2009 revenues, respectively, led by its foreign airport portfolio, which all reported double-digit declines in EBITDA. MAp’s major airport asset, Sydney Airport, registered a 1.8% and a 2.0% increase in revenue and EBITDA, respectively, for the six months ended 30-Jun-2009.

MAp maintains that although growth prospects for the aviation industry remain strong, it expects traffic at its European airports to report a full year decline.

Elsewhere in the region, shares in Chinese airports bounced back yesterday after over a week of declines.

Shares in European airports were generally up yesterday with construction company, Hochtief, leading the increase, surging 6.1%. 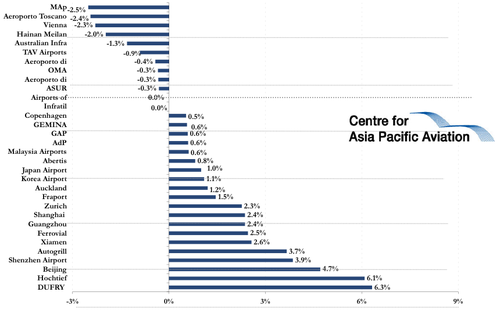