Manufacturers face critical decision as the market gets cloudier

Even as Airbus and Boeing struggle with their next narrow-body programs, Forecast International expects they, and new entrants, will produce 11,844 large commercial transports over the next decade, a production, the Connecticut-based company estimates will be valued at USD1.41 trillion in constant US dollars. But it is the decisions the companies are facing now, as the market becomes more crowded and less clear, that will mark them for some time, according to Forecast International.

Some 98% of the production will be produced by Airbus and Boeing, according to the study, but emerging competitors from China and Russia will make small inroads into the market towards the end of the decade. The company also included Bombardier in its market research, noting the 100- to 145-seat CSeries will compete directly with the two US and European manufacturers.

It noted airlines are struggling to return to profitability as traffic builds, especially in the cargo market. However, it said the recovery which began in late 2009, has been uniform worldwide although Europe and North America trail the Asia/Pacific and the Middle East in building traffic.

In addition, a healthy debate is emerging as to whether or not the global economy is in for a double dip recession which some say could come as early as the second half of 2010.

UBS suggested the next dip could come in the 2012 period, citing stalling recoveries in key regions, especially in Europe which is facing sovereign debt issues. UBS issued a report this week saying another downturn is all but inevitable, although it cannot say when. It all, said the company, depends on government stimulus which could delay the next dip. It also hedged its prediction saying economic growth this year and next could, in fact, “be quite solid.”  However, UBS also said that government actions would not be able to prevent a double dip. Worse, if the stimulus is too big and pushes back the next dip for too long, whatever downturn occurs will be far worse.

Meanwhile the US Federal Reserve countered it by yesterday afternoon saying it did not believe the US, at least, would experience a double dip. Appearing on US ABC News, Federal Reserve Chair Ben Bernanke cited signs of rising consumer and corporate spending. The news came as the International Air Transport Association was declaring worldwide airlines will make USD2.5 billion in profits this year, a dramatic turnaround from its earlier position that called for more losses.

"These product development decisions will have long-term consequences,” said Forecast International Senior Aerospace Analyst Raymond Jaworowski. The product decisions that Airbus and Boeing make over the next few months will have reverberations for years to come. First, Airbus and Boeing have to determine how best to adjust production rates in response to market conditions. Second, they must decide on the scope and timing of new product development efforts in the face of competition from each other and new contenders such as the Bombardier CSeries."

Jaworowski noted Boeing and Airbus, having recently increased narrow-body production rates, still struggle with their upcoming narrow-body-replacement decisions that will “reshape and refashion their product lines to meet the needs of the future market.” Compounding this for Boeing is its response to the Airbus A350XWB which was, itself, a response to Boeing’s Dreamliner, but broadened to compete not only with the Dreamliner but with Boeing’s 777. Boeing is now also facing either an upgrade or a replacement for the 777 in order to compete.

Boeing has been very vocal that the market will wait for it, should it decide to field a new narrow-body rather than re-engining the B737 while Airbus is content with re-engining its A320. Airbus has more flexibility since the short landing gear on the B737 has forced compromises to larger engines in the past. Boeing has said a new aircraft could be ready in the 2019-2020 time period and could be its decision whether or to Airbus goes with a re-engine or a new design. 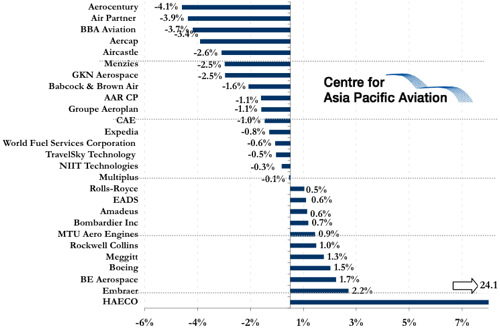