Malaysia Airlines has completed the migration to a new reservations system, marking another step in the flag carrier’s transformation. The Amadeus Altea Passenger Service System will enable Malaysia Airlines to significantly enhance codeshare partnerships both within and outside the oneworld alliance.

Switching reservation systems and expanding the partnership portfolio is an important component of the new Malaysia Airlines strategy under group CEO Peter Bellew.

Mr Bellew has adopted a different approach to partnerships from that of his predecessor Christoph Mueller, who forged a landmark partnership with Emirates but decided to reduce the total number of codeshare partners significantly – concluding that several did not have sufficient volume to justify being maintained. Mr Bellew has been open to expanding the number of partnerships, including reactivating some of the approximately 10 codeshares that Mr Mueller decided to turn off.

At the same time, the Emirates partnership has turned into something much smaller than originally envisaged. Instead of relying heavily on Emirates, Malaysia Airlines now prefers to build a diversified portfolio of partners, including relationships with all three Gulf carriers.

Malaysia Airlines transitioned to the Amadeus Altea Passenger Service System (PSS) at midnight on 11-Jun-2017. Malaysia Airlines initially forged a contract with Amadeus in Oct-2016, leading to an eight-month migration project. The airline was previously using a PSS supplied by SITA.

With the new PSS Malaysia Airlines is able to improve the booking experience for its online customers and pursue more codeshare traffic. Malaysia Airlines says it had limitations under the previous system, and was not able to sell most codeshare flights on its website.

Malaysia Airlines CEO Peter Bellew said that most codeshare flights had historically only been available for sale on GDSs. “This will open up a whole other world to us”, he told CAPA on the sidelines of the 4-Jun-2017 IATA AGM.

With the old PSS passengers were also unable to make changes to existing tickets online, having to contact the call centre to make any changes. Under Altea Malaysia Airlines passengers are now able to change their bookings online, and can enjoy other new functions.

Approximately two thirds of oneworld members were already Altea customers. Malaysia Airlines plans to pursue expanded relationships with several oneworld members now that it has switched to the Altea platform. “It’s a bit of a joke you are part of oneworld and you can’t sell a flight on our own site”, Mr Bellew said.

Obvious holes in its portfolio of codeshare partners are oneworld members British Airways and Qantas. BA is the only oneworld member serving Kuala Lumpur that does not yet have a codeshare with Malaysia Airlines.

A partnership with Malaysia Airlines could become more appealing to BA in 2018 as Malaysia Airlines downgauges both of its London flights from the A380 to A350. BA launched services to Kuala Lumpur in 2015, two years after Malaysia Airlines joined oneworld, and initially elected against pursuing a codeshare on the route due to overcapacity concerns.

After taking over as CEO, Mr Bellew established a team aimed at better managing the relationship with Emirates and fully exploiting the potential opportunities. Initially, Mr Bellew was hopeful that the Emirates codeshare would experience a significant increase in traffic volumes.

However, traffic volumes generated by the Emirates partnership have remained relatively low. The switch to Altea should generate some improvements as more Emirates operated flights and fare classes will become available for sale on the Malaysia Airlines website, but it is still unlikely the partnership will generate the volumes that were first anticipated when it was forged in late 2015.

“Emirates has unbelievably low fares on their own website”, Mr Bellew said. “It’s cheaper to book through Emirates than it is with us.”

When the Emirates codeshare was forged by Mr Mueller, the partnership was expected to be comprehensive and provide an alternative to Malaysia Airlines' own long haul network. Malaysia Airlines cut all of its long haul routes except London as part of a network restructuring exercise which was completed in early 2016 – just as the first phase of the Emirates codeshare was implemented.

The Emirates partnerships still has some value, but has evolved differently from what was originally envisaged. Instead of relying heavily on Emirates to provide offline connectivity, Malaysia Airlines now prefers to build a diversified portfolio of partners, including the addition of all three Gulf airlines.

Malaysia Airlines already had limited codeshares with Etihad and Qatar when it pursued the deal with Emirates. The partnership with Qatar has been maintained, given the oneworld connection. Somewhat surprisingly, Malaysia Airlines has also expanded its codeshare with Etihad, instead of dissolving it as the Emirates codeshare was implemented.

Mr Bellew said Malaysia Airlines is happy to work with all the Gulf carriers and pointed out “they all do different stuff with us”. He added: “We are the Switzerland of airlines. We get along with everybody”.

Its portfolio of codeshare partners now includes nine other airlines from Southeast Asia. None of these airlines are members of oneworld – Malaysia Airlines is the region’s only oneworld member.

“There’s a lot of stuff that paused around 2013 and 2014. There’s a lot of stuff in China that should have been executed that didn’t get done that we are starting to execute now four five years later”, Mr Bellew said. “A lot of agreements were made and weren’t executed. What we will be doing over the next 18 months is we will literally be making them happen.”

The switch to Altea opens up opportunities to revisit partnerships that were forged but never implemented, and partnerships that were dissolved as the airline restructured. But the airline will not rush to turn on several new codeshares at once as it prefers as a first step to make sure everything is in order. “There will be a lot more over the next 12 to 18 months”, Mr Bellew said.

China connectivity has emerged as an important area as Malaysia Airlines expands its mainland China network by eight destinations in 2017. Xiamen Airlines is now listed as its only codeshare partner from China.

Xiamen, along with Beijing, Guangzhou and Shanghai, were its only Chinese destinations at the beginning of 2017. Malaysia Airlines has already added Haikou and Nanjing so far this year, and plans to add Chengdu, Chongqing, Fuzhou, Shenzhen, Tianjin and Wuhan by the end of 2017.

Malaysia Airlines China network: previous destinations (in black) and destinations being added in 2017 (in red) 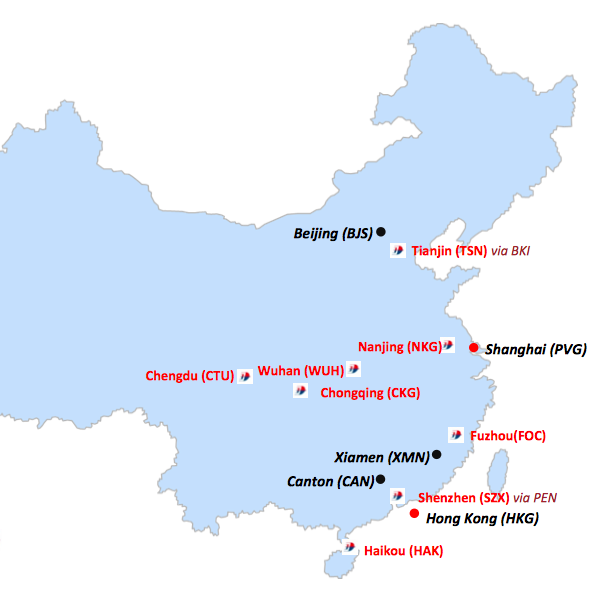 Mr Bellew said initial sales on all its new China routes have been above expectations. China accounts for almost all of the airline’s capacity growth in 2017 and the airline is planning further expansion in the Chinese market in 2018 and beyond.

Partnerships have two important strategic benefits. In addition to providing Malaysia Airlines with offline access, it gives the airline the ability to feed its partners by providing regional connectivity.

Codeshare traffic on Malaysia Airlines operated domestic and regional international flights is typically much higher yielding than traffic sold through its own distribution channels. As Malaysia Airlines enhances existing partnerships and adds new partnerships, it should be able to boost its own load factor and yield. The higher yields generated from codeshare traffic should offset some of the current pressures on yields driven by intensifying competition.

Mr Bellew said Malaysia Airlines expects some regional routes to come under competitive pressure in the next two to three years. The airline hopes to increase codeshare traffic on these particular routes by working closely with partners that fly into Kuala Lumpur and can benefit from improved regional connectivity. “If all they do is help you fill 5% or 6% of seats well that’s just fantastic”, he said.

Malaysia Airlines is still in the early phases of implementing its new partnership strategy and repositioning the airline overall for profitability.

The airline still has a lot of work ahead to make sure it maximises its growing portfolio of partnerships. The initial low volumes generated by the Emirates partnership highlight the challenges that need to be overcome in order to derive significant value from partnerships.

Initially the focus will be on using Altea to drive codeshare revenue and traffic growth while also improving the usability of the airline’s website. Malaysia Airlines has come a long way in a relatively short period of time, but its transformation journey by many measures has just started.