Malaysia Airlines CEO, Tengku Azmil Aziz, stated the carrier expects to post an operating profit in the range of USD30 million to USD90 million for FY2010, marking a turnaround from operating losses in 2009. The carrier is also considering debt financing in 2010 to fund aircraft orders, but added that it has no plans for additional equity raising after a successful rights issue. Shares in the carrier gained 5.5% yesterday.

On the other end of the spectrum, Chinese airline shares continued to suffer after recent strong gains and concerns about exchange rates, with shares in the ‘Big 3’ Chinese airlines – China Eastern, Air China and China Southern – slipping 4.0%, 3.5% and 3.1%, respectively (following reductions of 3.4%, 3.5% and 6.0% on Tuesday). Shares in Hainan Airlines were 0.9% weaker yesterday. 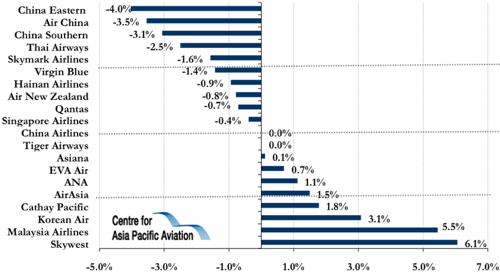