Thai Airways’ shares eased 1.6% yesterday as the social and political atmosphere heats up again in Bangkok.

It comes as Thai sees an improvement in the operating environment, with Executive VP, Chokchai Panyayong, telling Reuters the carrier expects to report net profits of around USD153 million for FY2010, rising to USD184 million in 2011 and USD245 million in 2012.

The airline also outlined its long-term fleet plan, in a wide-ranging response to "increased competition over the next five years, as well as open skies in Asia and various regions worldwide". Thai’s route network strategy aims to "continue developing Bangkok as the main hub by enhancing its schedule for more connectivity and will also increase production on profitable routes that are part of its regional and European network". For full details, please see today’s edition of Asia Pacific Airline Daily.

Elsewhere, Malaysia Airlines' shares slumped 5% as the carrier announced stock issued under its renounceable rights issue of 1.7 billion new ordinary shares of MYR1.00 each will be listed on 12-Mar-2010. 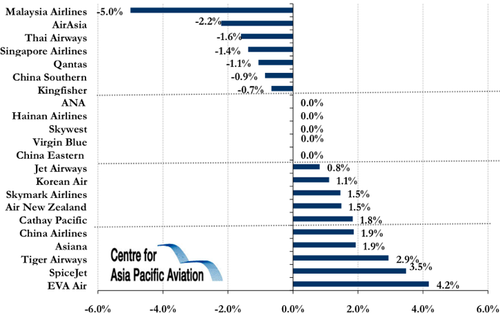