It may not attract the same sort of attention as Le Bourget or Farnborough, but the MAKS International Aerospace Salon is the venue where Russia’s airlines, leasing companies and aircraft manufacturers hammer out the final details of major orders. The bi-annual event, which wrapped up at the end of Aug-2013, saw more than USD21 billion in orders and commitments made, a record for the show and a qualified success for the Russian aerospace industry.

Russia’s state-owned United Aircraft Corporation (UAC) and its subsidiaries recorded orders and commitment for more than USD12 billion. Agreements signed by UAC at MAKS 2013 covered orders for 178 aircraft, comprising 96 Sukhoi Superjet 100s and 82 Irkut MS-21 aircraft. Including other agreements signed at the airshow – mostly military – the orders boosted the value of the company’s backlog by 30%. Including letters of intent and provisional purchase agreements, UAC’s total order portfolio is now close to RUB1.5 trillion (USD44.8 billion).

Russian leasing companies come to the rescue of Russian planemakers

The majority of the orders signed at the airshow were agreements between Russian aircraft manufacturers and Russian leasing companies. Irkut entered a contract with VEB Leasing for 30 MS-21s, and signed another deal with Ilyushin Finance Co for the supply of 22 MS-21-300s. Sberbank Leasing ordered another 20 MS-21 from Irkut. Ilyushin Finance Co and Sberbank Leasing both signed agreements with Sukhoi Civil Aircraft for 20 Superjet 100s apiece. SCA and AviaAM Leasing entered an agreement covering the supply of five Superjet 100s.

Russian and regional carriers also made a number of smaller orders. Irkut and IrAero entered into a fixed contract for the supply of 10 MS-21s. Ukrainian carrier UTair signed an agreement for six Sukhoi Superjet 100LRs, and UTair director general Andrey Martirosov commented that the carrier could buy more SSJ 100s in the future.

UAC president Mikhail Pogosyan said the company was "satisfied" with the results of the airshow and the contracts signed at the show "demonstrate UAC’s positive business development and cover all our strategic activities." The existing UAC order portfolio "provides for the stable growth of the UAC businesses in the mid-term" according to Mr Pogosyan.

Bombardier rescues the Q400, with help from Rostec

Also taking centre stage at the airshow was Bombardier. The much rumoured and long-anticipated Bombardier move to set up Q400 production in Russia was finally put in motion. Bombardier and the Rostec state corporation signed a major MoU to explore the localisation of Q400 manufacturing in Russia. A joint venture for final assembly of the Canadian aircraft could be set up in Ulyanovsk, about 900 km southeast of Moscow. Local production would be incremental to Bombardier’s current Q400 production operations in Toronto. Bombardier and Rostec are working towards definitive agreements to be concluded in 2014.

In addition to the production agreement, a letter of intent was signed with Rostec, covering the sale of 100 Q400s to Russian customers. Ilyushin Finance Co and Avia Capital Services – the leasing arm of Rostec – will acquire 50 aircraft each. The initial agreement will be turned into a fixed contract at a future date. Aircraft deliveries are tentatively scheduled to commence in 2014. Should the MOU lead to the establishment of a final assembly line in Russia, the aircraft that IFC intends to purchase would be locally assembled.

The production deal is a milestone for Bombardier, even if it is only a few signatures on a page at this stage. If it goes ahead, it will be the company’s first assembly line outside of Canada. While Bombardier’s production facilities are geographically diffuse – it has facilities in more than 25 countries – it has been reluctant to locate final assembly outside of North America. However, in recent negotiations with its unions Bombardier noted that the costs of manufacturing the Q400 in Canada are approximately USD2 million per aircraft more than at rival ATR.

The order deal will go a long way to reviving the fortunes of the flagging Q400 programme. A full firm order contract for 100 Q400s is valued at approximately USD3.39 billion. Sales of the Q400 have been eclipsed by ATR’s turboprop offerings recently, so much so that Bombardier has progressively cut back output. As of 30-Jun-2013, the firm order backlog for the QSeries programme was just 36 aircraft. 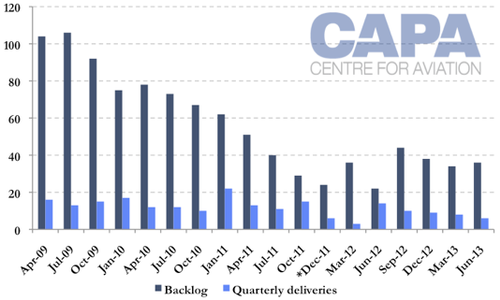 Bombardier and Irkut also signed a LoI to commence exploratory discussions centred around customer support for MS-21 aircraft. The deal would focus on the development customer support infrastructure within Russia based on Bombardier’s model and also explore areas of knowledge sharing and potential future areas of collaboration. The deal echoes the strategic collaboration agreement Bombardier has with COMAC, helping the Chinese manufacturer develop the C919 narrowbody. COMAC and Irkut both hope that their new aircraft will help break up the large aircraft duopoly of Airbus and Boeing.

A record airshow for Russia, but not the victory it needed

With UAC and Bombardier both pulling in big orders, the level of deal making comfortably eclipsed the previous record of USD16 billion in 2011. While it was a record year in Moscow and a strong result for the Russian aerospace industry overall, the lack of foreign sales success for Russia’s commercial aircraft is concerning. UAC desperately needs industry confidence in its aircraft if it is to win more orders.

After a painful disintegration following the dissolution of the Soviet Union, Russia’s commercial aircraft manufacturers are attempting to regain some of their former standing. Orders such as those placed at MAKS are desperately needed by the manufacturers to keep revenue rolling in, stem losses at UAC and its subsidiaries, and ensure the financial strength and stability that the industry needs to develop and produce aircraft that are competitive on the global stage.

Russia faces stiff opposition in the form of the established large aircraft manufacturers, and a threat to its niche as a supplier of low price-point aircraft from new entrants like China. After being closed to Western manufacturers, the fleets of Russian commercial airlines are dominated by Airbus and Boeing and other manufacturers have made inroads as some regulations, financing rules and import regulations have been relaxed. 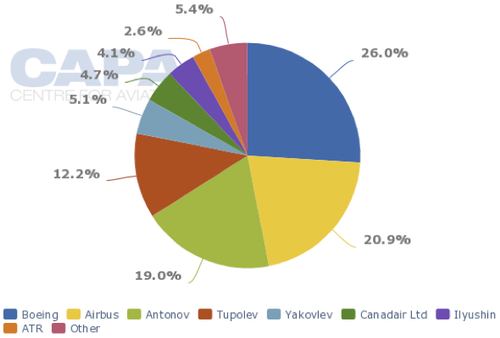 Worse still, Western manufacturers account for the largest amount of aircraft on order with Russian carriers. This is particularly so in the profitable widebody aircraft segment, where Airbus and Boeing still enjoy a duopoly, if a strongly competitive one. 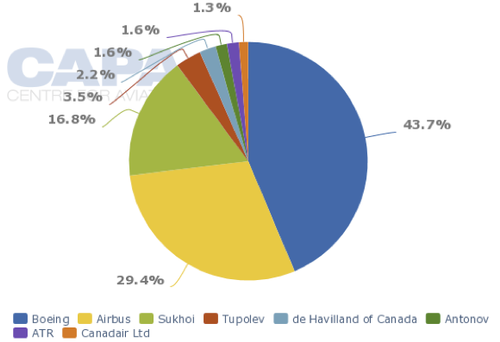 It is not that this kind of support is new or unusual, it is just that its scale – amounting to tens of billions of dollars at MAKS alone – is particularly noteworthy. Government acquisitions and semi-government owned national carriers have long been used to supporting the development of local aircraft manufacturers: Air France and Lufthansa were among the earliest purchasers of the Airbus aircraft, Brazil’s state-owned carriers were active purchasers of Embraer aircraft. However, both companies were eventually able to stand on their own successes.

In Russia, with its high incidence of state control in airlines and almost total state domination of aircraft manufacturers, leasing companies and financing entities, such a confluence is inevitable. All of Russia’s major aircraft manufacturers are government controlled under the umbrella of UAC. Six of Russia’s 12 largest airlines are either partially or wholly state controlled. Russia's largest leasing companies – VEB Leasing, VTB Leasing, Sberbank Leasing – are all units of state-controlled banking groups. The result is that orders for Russia’s new aircraft have been highly concentrated with Russian carriers or Russian leasing companies. That may be enough to salve national pride issues among Russian politicians, but it is not enough to ensure that the development of the national commercial aerospace manufacturing industry is a success.

In the past few years, Russia has redoubled efforts to once again make the country a force in civil aircraft manufacturing. What is at stake is a slice of the global commercial aircraft business and billions of dollars for the Russian economy.

The regional jet and narrowbody markets that Russia is currently targeting are valued at USD2.5 trillion over the next 20 years, with projected demand for 25,000 to 30,000 aircraft. Russia and the CIS alone are expected to account for almost 5% of aircraft demand in these two market segments, possibly more if regional liberalisation continues. This makes the success of the domestic aircraft manufacturing industry a multi-billion dollar question for Russia.

Earlier in the year, Russian Deputy Prime Minister Dmitry Rogozin was critical of the state of the country’s aircraft manufacturers, lamenting the downfall of famous design bureaus such as Tupolev, Sukhoi, MiG and Yakovlev for “some inexplicable reasons”. Unfortunately for Russia, the reasons are actually all too explicable: Western manufactured aircraft have proven to be vastly more attractive products. Not only have they proven more cost effective, capable and efficient that Russian products, but Western manufacturers have also had far better product and aftermarket support, not to mention generous financing assistance via export credit agencies.

Russia needs to start selling aircraft outside its regional sphere if its aircraft are to be considered successful and there are definite signs of intent. IFC director general Alexander Rubtsov noted that the MS-21 aircraft purchased by the firm are intended for lease by both Russian and foreign customers. IFC also intends to lease some of the SSJ 100s to Southeast Asian and Middle Eastern customers. At the airshow Sukhoi Civil Aircraft and Sberbank Leasing initialled an agreement to set up a leasing company to promote the Superjet 100 to both Russian and foreign customers. Up to 50 aircraft could be leased.

Interjet’s use of the SSJ 100 may be a key to success for Russia’ aircraft industry. If the aircraft gets a good report card from the carrier, and passengers take to it, then the fragile and intangible confidence in Russian aircraft may just receive the boost it needs. As Superjet International CEO Nazario Cauceglia noted earlier in the year, the aircraft “cannot fail” with Interjet, otherwise it will have failed the test of the Western market.