Leading the LCC gainers again yesterday was Air Berlin, up 5.7% following Wednesday’s 7.0% gain, on news that the LCC increased unit revenue (per ASK) in Jul-2009 by 5.9% year-on-year to EUR 6.20 cents. The carrier’s load factor gained 0.1 ppts to 83.4% in the month, as the carrier benefited from a capacity reduction of 3.4% in the quarter. Passenger numbers declined 3.3% to 2.8 million as a result of the capacity contraction.

US domestic revenues and yields remain weak, but on the improve

Across the Atlantic, Southwest (+1.3%) reported a 0.1% increase in revenue passengers in Jul-2009, with load factors jumping 6.9 ppts to 83.2%, a key improvement for the carrier. However, of key concern for the carrier was a continued reduction in passenger revenue per ASM in the range of 5-6% in the month, although this does represent an improvement from the Jun-2009’s 9-10% reduction,

Frontier Airlines meanwhile, reported an 11.0% year-on-year reduction in unit revenue, and an 15.0% reduction in yield in the month, despite significant capacity reductions during the month (-16.0%). This resulted in a 10.5% reduction in passenger levels, but boosted load factors by 4.2 ppts to 92.0%.

WestJet (+3.4%), similarly, warned that the pricing environment showed no signs of improvements in Jul-2009 or 2Q2009, with the carrier anticipating declines continuing at similar levels in 3Q2009, reflecting current economic challenges and aggressive competitive prices. The carrier, which reported an 11.6% reduction in yield and 15.4% RASM reduction in 2Q2009, stated it is seeing early indications that the economy is recovering, with stability over the past six weeks.  WestJet reported a steep reduction in profitability levels in 2Q2009, with net profitability down 65.7% to CAD9.2 million, although these results were stronger than expected, prompting a 3.4% increase in the carrier’s shares yesterday.

In the Asia Pacific region, AirAsia's shares gained 2.0%, as the carrier announced that it had signed an amendment agreement with Airbus to defer the delivery of eight A320 aircraft originally scheduled for delivery in 2010 to the 2014, without any financial penalties. 16 aircraft will still be delivered to the carrier in 2010. AirAsia stated it has deferred the aircraft as it foresees infrastructure constraints with the current airport facilities in Kuala Lumpur and until the new LCCT is constructed.

Air Arabia's shares also gained yesterday, up 5.0%, its largest gain at the Dubai Exchange after being rated “buy” in resumed coverage at Goldman Sachs Group. 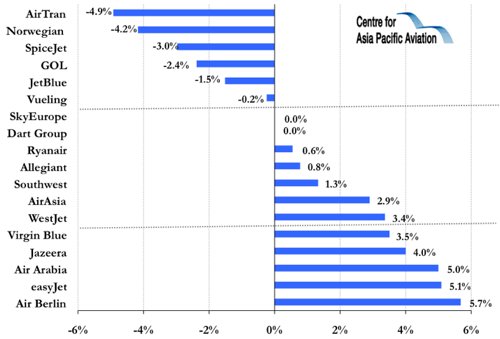