Shares in Macquarie Airports surged a further 7.4% yesterday to a three-month high of AUD2.18. Its listed investments also did well, with Copenhagen Airport rising 4.8% and ASUR gaining 2.9% yesterday.

Shares in Vienna Airport operator, Flughafen Wien, eased 0.8%, as the company turned in weak first quarter earnings (see below) and revised its traffic estimates for the full year. It is now forecasting a decrease of 9% in the number of passengers and 8% each in maximum take-off weight and flight movements. 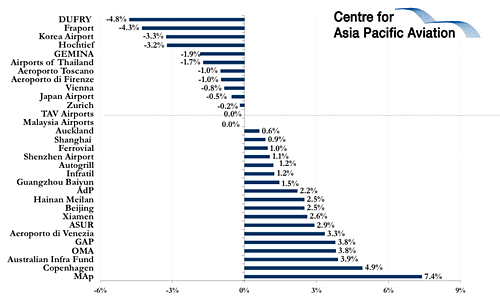 Financial results improved from minus EUR 2.7 million to minus EUR 2.0 million. After the deduction of taxes totalling EUR 5.5 million, net profit for the period equalled EUR 17.5 million (first quarter of 2008:EUR 20.8 million).

Revenue development was supported by all segments of the Flughafen Wien Group with the exception of the Airport Segment. The initial application of IFRS 8 resulted in the new structuring of the Group’s operating segments. Revenue recorded by the Airport Segment fell by 9.2% year-on-year.

Vienna International Airport handled a total of 3,660,091 passengers during the period from January to March 2009, down 14.8% year-on-year. Traffic to Eastern Europe and Western Europe fell by 18.3% and 13.9%, respectively.

The Middle East was least affected by the economic crisis with a decrease of 4.8%. An analysis of the traffic volume by airline shows a continued decline in the share of passengers handled by the Austrian Airlines Group to 48.3% (first quarter of 2008: 48.8%). The LCC segment recorded the lowest drop in passenger volume with a decrease of 12.3%.

Traffic results for April show a further decline in all segments. In comparison with April of the previous year, the number of passengers fell by 9.5%. Flight movements and maximum take-off weight (MTOW) decreased 12.6% and 8.8%, respectively. The number of passengers travelling to Eastern Europe (scheduled and charter flights) was 22.1% lower in April 2009. The other European destinations reported a decline of 7.9%.

Flughafen Wien AG has revised its traffic estimates for the current year based on developments during the first months, and is now forecasting a decrease of 9% in the number of passengers and 8% each in maximum take-off weight and flight movements. The number of passengers handled at Vienna International Airport is expected to reach roughly 18 million by the end of 2009.

Capital expenditure for the period from 2009 to 2013 is now planned to total EUR 937 million (excluding the purchase of land), whereby EUR 242 million are allocated to projects that can be postponed. Investments in projects that cannot be postponed total EUR 695 million and comprise EUR 633 million of expansion projects and EUR 62 million of replacement investments. A decision on the timing of these investments will be made during the second quarter of 2009.