Shares in Swiss airport retailer, Dufry, surged 16.5% on Friday, as it revealed revenue in the first three months of 2009 rose 19.7%, helped by the consolidation of Hudson Group (which contributed 34% of the revenue growth). New airport concessions and currency gains resulted in a positive revenue effect of 3.8%, whereas organic growth was a negative 18.1% as Dufry experienced a softening in passenger demand at its stores caused by the current economic environment and the effect of Easter holidays falling in April.

Dufry’s EBITDA (before other operational result) rose 15.8%, resulting in an EBITDA margin of 10.8% (see edited release below).

The upcoming June edition of Airport Investor Monthly contains a full wrap of airports offering incentives to airlines and concessionaires amid the global economic slowdown. 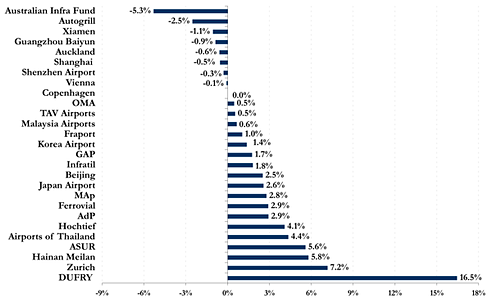 Overall, Dufry experienced a softening in turnover due to a lower number of passengers caused by the current economic environment, the effect of Easter holidays, which historically has been about 5% - 10%, because they fall into the second quarter in 2009 compared to 2008, when Easter was in the first quarter, and one-off effects, such as in Italy.

The performance of the regions varied significantly and Dufry’s broad geographic diversification has resulted in a more balanced performance. On a regional basis, Europe continued to feel the negative impact of the Alitalia de-hubbing of the Milan airports, which took place in the second quarter last year. Africa performed well and was able to maintain last year’s turnover level. Eurasia saw a mixed picture, with some operations continuing to perform well and others being more impacted by the economic environment. Central America & Caribbean had a weak performance and particularly sales of watches & jewelry suffered strongly. South America posted a single digit decrease compensating part of the organic reduction in turnover with new operations that were opened in 2008. In terms of seasonality, the first quarter is the slowest quarter of the year for Dufry as well as for Hudson.

Gross profit margin as percentage of turnover continued to increase to 55.4% in the first three months of 2009, an increase by 2.1 percentage points compared to 53.3% in the corresponding quarter of 2008. Dufry’s EBITDA (before other operational result) increased by 15.8% to CHF 58.1 million versus CHF 50.1 million in the first quarter of 2008. EBITDA margin was 10.8% compared to last year’s first quarter margin of 11.1%. The efficiency plan, which was launched during the last quarter of 2008, positively impacted the profitability and allowed to protect the margin across the group. At the same time, it also had a positive effect on Dufry’s cash generation and net debt was reduced to CHF 807.5 million as per 31 March, 2009 resulting in stable covenants.

Julian Diaz, CEO of Dufry Group, commented: “In the first quarter of 2009, the accelerated decrease of passenger numbers combined with the one-off effects and the impact of Easter resulted in a strong decrease in organic growth. We will continue to closely monitor the development and take further actions if required as we have already done as part of our efficiency plan. Thanks to this, we have managed to maintain our profitability despite the current economic environment and the adverse conditions that have prevailed in the market. The focus on profitability and cash generation based on our efficiency plan has been implemented across the group and the results have been in line with our planning so far.

"Having said this, the efficiency plan foresees further measures for the rest of the year and it will remain one area of focus for Dufry. Also, the integration of Hudson is on track and is well advanced on the operational level. The first synergies have started to materialize in terms of numbers. In this respect, the resilience of Hudson’s business proofs a strong basis to drive the integration.

"Overall, Dufry’s performance in the first quarter highlights the resilience of our business model in terms of profitability and even though there is limited visibility on when the negative trend of passenger numbers will bottom out, Dufry’s first quarter numbers demonstrate that it can operate successfully even in a challenging environment.”