The dark tone of European trading on Friday - with markets steeply down following the release of ugly US unemployment figures - hurt airport stocks on Friday. London's FTSE fell 2.7%, the German DAX lost 4.0% and France's CAC was down 5.5%.

Most of the major airport investors with large European exposure were savaged.

Beijing Capital reported a good bounce-back in traffic for the October month, as pent-up demand generated an overall increase of 24.6% in passenger throughput. The airport is projecting 10% growth during 2009.

The Wall St rebound after European markets closed will probably stimulate some recovery in airport stocks today, but the general pessimism surrounding European consumer spending is weighing hard on the sector. 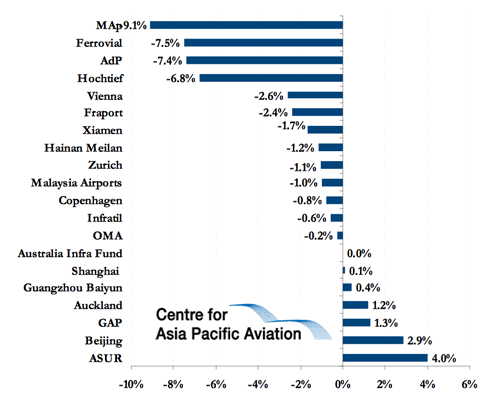