Shares in airports worldwide were generally higher yesterday, with Chinese airports leading the increase and bouncing back from the lows experienced earlier in the week.

Joining the Chinese airport rally yesterday was Fraport, which bounced back from a 3.1% fall in the previous trading day, gaining 3.3%.

Hochtief’s shares also bounced back, closing up 4.4%. The construction company’s airport subsidiary, Hochtief Airport GmbH, recently completed construction work and testing phase for the expanded passenger terminal at Tirana International Airport in Albania. Hochtief, in partnership with Deutsche Investitions und Entwicklungsgesellschaft and the Albanian-American Enterprise Fund, was awarded a 20-year concession by the Albania Government in 2005. 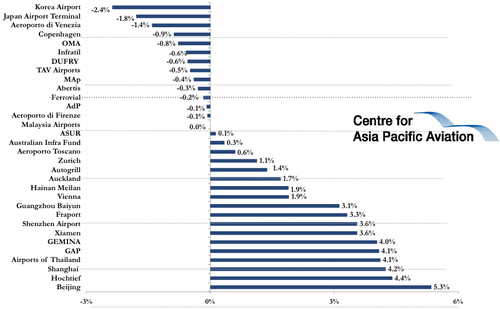