European airline shares rose for Monday (11-Oct-2010) after wider markets ended the day at a two-week high. Markets were up on continued speculation the US Federal Reserve plans to increase efforts to boost the economy.

Lufthansa yields still at or below 2009 levels

Lufthansa (-0.4%) was one of few airlines to end the session lower, after board member Stefan Lauer stated the carrier's average yield on European services is “still at or below the level of the crisis year 2009", adding that margins are still below the level required for investments in the airline's fleet.

Also during trading, the group announced a 2.0 ppt year-on-year improvement in load factor for Sep-2010, to 82.6%. A breakdown is as follows:

Passenger numbers were meanwhile up 7.9%, to 8.7 million:

easyJet (+0.6%) also rose marginally after resolving its dispute with founder and major shareholder, Sir Stelios Haji-Ioannou, over the terms of the easyJet brand licence.

Finnair (+3.6%) made the strongest gain of the day, despite Finnish Aviation Union (IAU) announcing it will commence a strike in companies providing air transport technical services on 25-Oct-2010, unless a new collective agreement covering air transport services is achieved before that time.

The industrial action will affect Finnair Technical Services Oy, Finnair Engine Services Oy and Finnair Flight Academy Oy. Negotiations on a collective agreement have been at a standstill for two weeks due to a disagreement between the IAU and the RTG Ground Handling. A solution was reached on 08-Oct-2010, at which time collective agreement negotiations resumed. The IAU, however, broke off negotiations and announced the threat of industrial action shortly afterwards. Finnair warned the strike would hit its operations significantly. 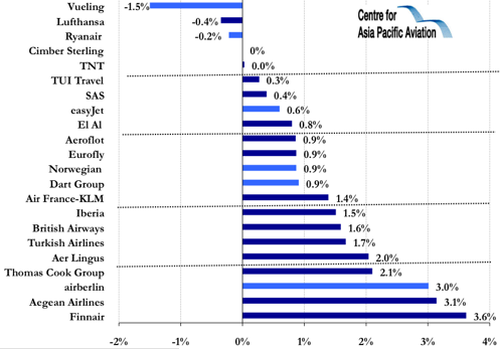