Lufthansa up on analyst comments; Finnair trying to block airBaltic from Finncomm sale

Lufthansa up on analyst comments

Lufthansa (+3.6%) rose following positive comments from Citi analyst, Andrew Light. Mr Light stated the group is now more “comfortable” with the group’s restructuring efforts, particularly with subsidiary carriers, and the group’s revenue outlook, following the release of its 1H2010 results. The group reported a net loss of EUR104 million for the six months, compared with a loss of EUR178 million in the previous corresponding period.

Also during trading, Finnair (+0.2%) estimated that an end to cooperation with privately owned domestic carrier Finncomm would cost it USD26 million. Finnair is attempting to block AirBaltic's purchase of Finncomm by asking a court to enforce a previous agreement that Finnair says gives it the right of first refusal on ownership in Finncomm.

Elsewhere, easyJet (-4.5%) was one of the day’s biggest decliners, after Barclays Capital initiated coverage of the carrier with an ‘Underweight’ rating. During trading, the LCC mandated Crédit Agricole CIB and KfW IPEX-Bank as joint underwriters and lead arrangers for a USD215 million, 10-year commercial debt financing of eight A319 and A320 aircraft, scheduled for delivery between Aug-2010 and May-2011. The carrier stated the agreement represents one of the largest single airline commercial debt financings arranged in the aviation bank market in 2010. 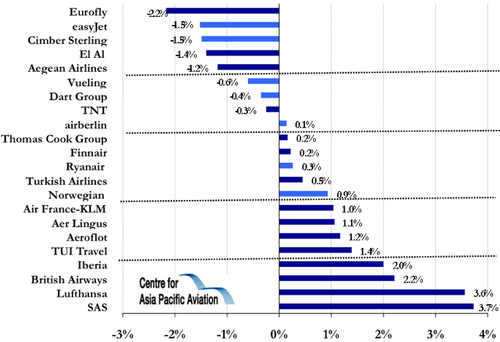