Lufthansa reported traffic across its group airlines edged up 0.5% in March. Traffic at the main Lufthansa unit rose 2.3%, to 5.1 million passengers, while traffic at SWISS was up 3.9% to 1.3 million. Austrian Airlines traffic declined 2.4%, while bmi traffic fell 14.3%.

Load factors were down 5.3 percentage points across the group, with the sharpest fall at Lufthansa. Cargo volume was up 16.7% year-on-year. Shares in Lufthansa were down 1.4% on Monday.

British Airways and Unite will have until 17-Apr-2011 to reach an agreement to end the threat of strike action by cabin crew over the Easter holiday period. Unite has until 17-Apr-2011 to announce industrial action in line with legal requirements following a ballot concluded on 28-Mar-2011.

easyJet announced it will trial a new initiative across three Scottish airports to help attract more business travellers. The trial will include fast-track security at Edinburgh and Aberdeen airports for passengers who purchase speedy boarding or hold an Easyjet plus card. It will also come as standard for anyone who books through a travel management company. The trial will also be introduced at Glasgow Airport during Apr-2011. 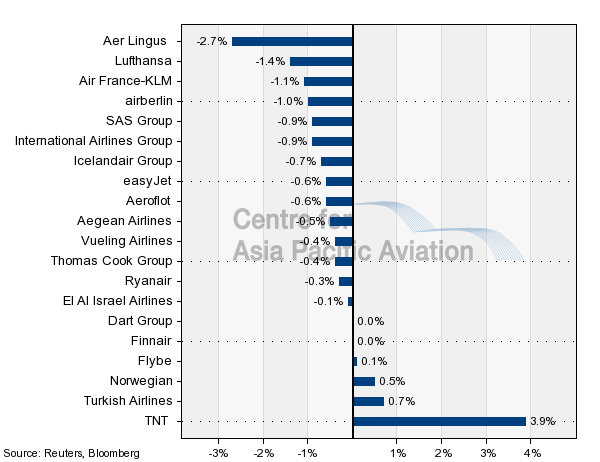