Lufthansa has confirmed plans to launch A380 operations on daily Frankfurt-Miami service from 10-Jun-2011, replacing B747 equipment. Miami will be the sixth Lufthansa destination to be served by the A380 and the third US destination after New York and San Francisco. The latest A380 route will be made possible by Lufthansa taking delivery of its eighth A380 in May-2011.

See related report: Lufthansa to commence A380 service to Miami

Shares in airberlin were flat as it confirmed it would complete the integration of LTU International Airways, which was acquired in Aug-2007, on 01-Apr-2011. The consolidation of flight operations is one of the key elements of the integration. As of 01-Apr-2011, there will only be one flight operation under the AOC of airberlin. The LTU integration is part of the "Accelerate 2012" programme covering revenue improvement, capacity adjustment and cost reduction.

Meanwhile, Air France secretary general Bertrand Lebel stated the carrier may split an order for around 100 widebody aircraft between Boeing and Airbus, according to a Bloomberg report. A decision on the possible order of A350 and B787 equipment will likely come “before the end of the year, maybe during the summer". Air France-KLM shares closed 1.4% lower yesterday. 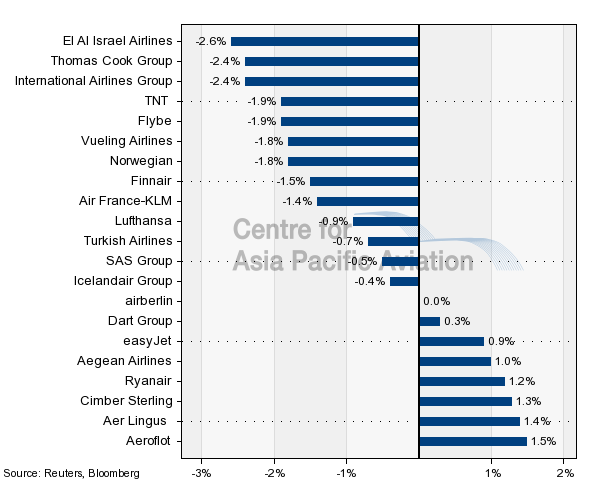