Lufthansa to hold onto bmi; Significant losses for Air France for European services?

Luthansa (shares down 0.6% yesterday) will hold off a possible sale of bmi until earnings can be restored, with a spokesman stating, “we’re trying to fix things". He added, "the emphasis is to make bmi profitable, and then we can see.”

Lufthansa's focus in 2010 is to fund aircraft purchases, with total new debt to be “significant lower” than 2009 levels, with the carrier currently discussing financing opportunities "that exceed USD700 million”, according to a Bloomberg report. See related article: Germany: A dynamic market in which consolidation activity features strongly

Air France-KLM (shares up 0.7% yesterday) could reported losses of more than EUR300 million on intra-European services in the current fiscal year, according to reports in Les Echoes.

“Substantial profit improvements” for easyJet in 2010

Also in Europe, easyJet’ shares jumped 5.2% upon the release of its financial results for the three months ended Dec-2009. See the Global LCC Share wrap for further information: Southwest sees 37th year of profitability; “Substantial profit improvements” for easyJet in 2010

For for all this and more coverage of today's European aviation developments, in addition to full coverage of easyJet's financial results, see Europe Airline Daily. 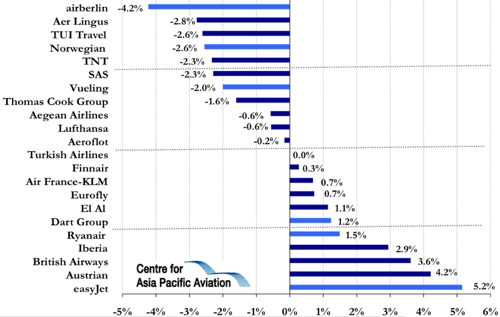