Lufthansa (-1.8%) declined on Tuesday (09-Nov-2001) despite reporting a 6.4% year-on-year increase in sales over Oct-2010, with all traffic regions contributing to the strong sales growth. Load factor for the month rose 0.6 ppts, to 81.3%, with all subsidiaries reporting improved loads except for bmi.

Passenger numbers for the group also rose for the period, gaining 6.2% year-on-year, to 8.5 million. Again, all carriers reporting improved passenger numbers except for bmi.

Conversely, Finnair (+0.4%) made a marginal gain, despite reporting a 1.1 ppt decline in load factor for Oct-2010, to 77.6%. Loads declined in all regions except for the Asia Pacific, thanks to recovering business demand.

Elsewhere, SAS (+1.9%) was one of the biggest gainers for the day, despite being one of 11 cargo carriers fined by the European Commission for co-ordinated action on surcharges for fuel and security without discounts over a six-year period between Dec-1999 and Feb-2006. SAS was fined EUR70.2 million. SAS stated it “strongly contest[s] the considerable level of the fines” and plans to appeal the decision to the EU's Court of First Instance, which may take several years. Other European carriers fined included Air France (-1.2%), KLM and British Airways (-0.4%). 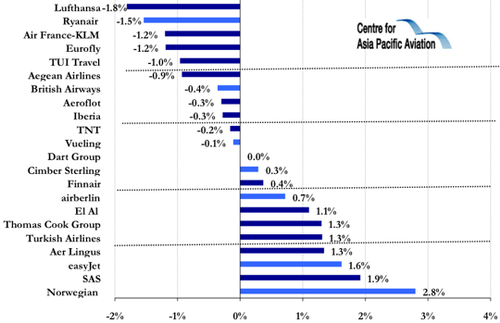