European airline shares were mixed again on Monday (24-May-2010) as wider markets gained, following an improvement in US stocks on Friday (21-May-2010). However, the banking sector continued to fall on concerns over the potential impact of the Bank of Spain's bailout of CajaSur.

Other UK travel groups, including TUI Travel (+0.7%) and Thomas Cook Group (+0.3%) rose during the session as passengers look to alter their bookings during the strike action.

Lufthansa was flat, despite stating over the weekend that it is experiencing a recovery in traffic levels across its network, thanks in part to marketing efforts and pricing strategies to stimulate demand. The carrier is witnessing a particular return in business traffic, although it expects premium demand will have a slow and protracted recovery.

easyJet (-0.4%) slipped after its share rating was cut from "overweight" to "equal-weight" by Morgan Stanley. The analysts stated the market will require clarity over fleet development and brand licence issues.

easyJet founder, Sir Stelios Haji-Ioannou, reportedly offered to drop the dispute over the use of the "easy" brand if it agrees to pay GBP3 million a year in royalties. The payment would equate to 0.1% of the airline’s annual revenue. The dispute is over an agreement made in 2000 where easyJet was to retain 75% of revenues, while easyGroup (owned by Mr Haji-Ioannou), would retain 25% of revenues made from additional or non-core services. Mr Haji-Ioannou, still controls 38% of the carrier. He made the proposal to the board in Apr-2010 ahead of a High Court battle due to commence 08-Jun-2010.

Morgan Stanley also adjusted its financial result estimates downwards for the carrier for FY2010 to FY2012, due to "higher fuel costs and weaker currency assumptions".

Elesewhere, Eurofly (-4.9%) and Vueling (-2.5%) declined with a 1.3% slump in Spain’s IGBM index. El Al (-2.8%) was also down. Turkish Airlines (+2.5%) and Iberia (+2.4%) were the day’s biggest gainers. Iberia rose after British Airways commented on Friday that it expects the carriers’ merger agreement to be completed by year-end. 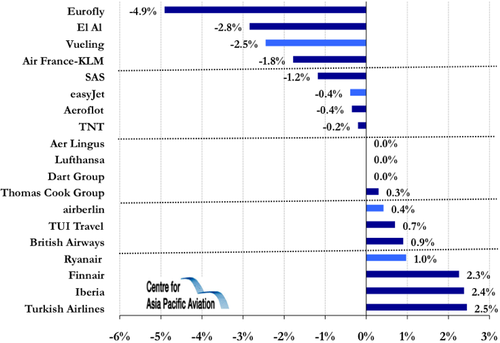