Lufthansa posted strong second quarter result, reporting a EUR301 million net profit for the period, a 55% year-on-year increase. The EUR203 million operating profit in 2Q was enough to push the group into the black at the operating level for the first half, with Lufthansa posing a EUR3 million operating for the six-month period. Its net loss for the half, however, doubled to EUR206 million.

Lufthansa’s half-year results missed expectations after the impact of some major events in the period were larger than previously reported. Lufthansa’s result was dragged down by Japan's earthquake and subsequent disasters, crises in North Africa and the Middle East and most significantly, an accounting rule that takes into account the cost of coverage options - primarily fuel hedging - against oil price changes. Ineffective derivative positions saw “other financial items” slump EUR417 million in the half to EUR-309 million.

“While the outlook was thoroughly positive for the global economy and the aviation industry at the beginning of 2011, prospects have become much more differentiated since the outbreak of political unrest in North Africa and the Middle East and the earthquake in Japan,” senior management said. “Thanks to our operating flexibility, we were able to react relatively quickly to the new conditions and adjust our flight plans and workflows to the new business climate. At the same time, however, the increased oil price had an adverse effect on business.”

Strong revenue growth was driven by the passenger airline group, which significantly improved over the 2010 result. But there were uneven results within the increasingly diverse Lufthansa group, which includes Lufthansa Passenger Airlines, SWISS, Austrian, bmi and Germanwings.

For the half, top-line revenue increased 11.4% to EUR14.06 billion, exceeding the growth in passenger numbers, which increased 10.1% to 50.23 million. The top line result includes revenues from the passenger airlines group, logistics, MRO, Catering and IT services. Passenger traffic revenue, which more closely captures the pricing environment, increased 13.7% to EUR11.6 billion, demonstrating the ongoing, although increasingly fragile, recovery in European air transport markets. Lufthansa noted that the recovery has been disrupted by the crises in Japan, North Africa and the Middle East.

The headline revenue and passenger traffic result is Lufthansa’s strongest yet but could be influenced by the inclusion of Germanwings for the first time, although Lufthansa said the inclusion “does not have a significant effect on overall [group] performance”, as the 2010 figures have been adjusted to facilitate comparison.

In the second quarter, traffic revenue increase 13.3% to EUR6.37 billion, outpacing the 12.7% increase in passenger numbers across the group. Lufthansa reported an operating profit of EUR230 million in the period, which was enough to offset the EUR-227 million loss in 1Q and edge the group into profitability for the half, if only slightly, at the operating level. Operating income for the half was EUR3 million, a marked improvement over the EUR174 million operating loss a year earlier. In 2Q, Lufthansa recorded a net profit of EUR301 million, a strong performance and a 55% year-on-year increase. This strong result, however, was not enough to offset 1Q’s heavy losses and Lufthansa remains in the red for the half. It’s net loss for the half doubled to EUR-206 million. 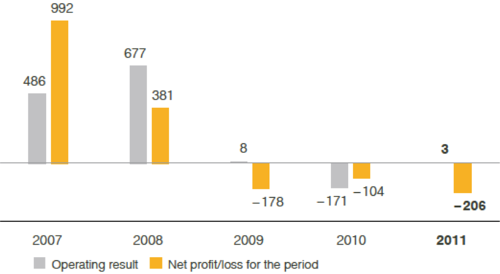 In the half, RPKS increased 9.1% and ASKs increased 11.9%, which caused loads to fall 1.9ppt to 75.4%. Load factors have been on a downward trend in the half as the group’s seeks to tap into the recovering demand for travel. 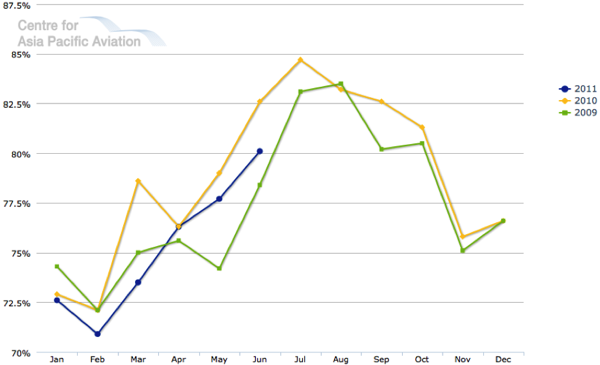 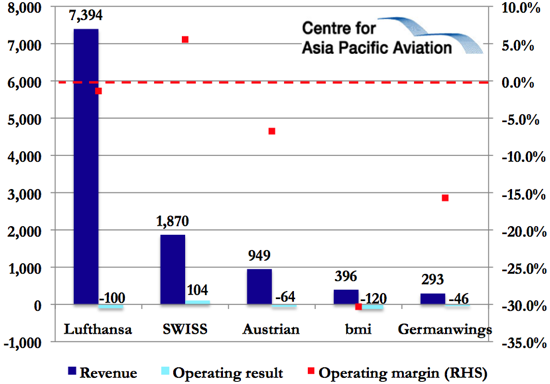 SWISS continues to be the highlight of the Lufthansa Group and it is the only airline in the group whose passenger operations are profitable at the operating level. SWISS performed extremely well in the half and was the most successful in recovering, at least in part, from the impact of the crises in Japan, North Africa and the Middle East and delivering year-on-year improvements. Strong demand on intercontinental sectors allowed SWISS to compensate for the negative trends in fuel prices and currency movements, Lufthansa said. SWISS’ EBITDA, which more closely reflects operating performance, than other metrics, increased 54.1% to EUR242 million.

Austrian, on the other hand, was unable to address the issues arising the crises and fuel price increases. Lufthansa acknowledged Austrian’s operating environment was “much more difficult than originally anticipated”, with the high oil price weighing on the airlines result. Two of Austrian’s other “strategic pillars”, the Middle East and Japan, were “hit by negative one-off factors”, while key central and eastern European markets, which are important short-haul destinations for Austrian Airlines, also disappointed. The EUR-64 million operating loss is a EUR6 million year-on-year improvement, and came despite a 1.6% fall in revenue, reflecting the work being done to cut costs at Austrian.

bmi continues to be the basket case of the group. Revenue fell 5% to EUR396 million and the operating loss deteriorated a further 29% year-on-year to EUR120 million, delivering a -30% operating margin. The UK carrier is continue to drop loss-making domestic (UK) routes with more profitable international routes, which includes the reorganisation of LCC bmibaby. In light of increasing airport charges in the UK, cost involved in the airline’s restructure, high fuel costs and low levels of hedging at bmi, an improvement on last years operating result looks unlikely, Lufthansa said.

Gemanwings’ operating loss worsened 17.9% to EUR-46 million in the half as fuel costs and German air traffic taxes soared. These sharp cost increases neutralised the 10.2% revenue increase, which was achieved despite a 2.0% fall in passenger numbers. Lufthana attributed the LCC’s revenue increase to deeper co-operation with its parent, which includes frequent flyer partnership and GDS commonality. Germanwings has also diversified its on-board product across its 30-strong fleet of A319s, offering a larger seat pitch in the first ten rows. This new revenue stream also contributed to the overall revenue increase. But costs were a larger concern for Germanwings, as high oil prices and the government’s travel tax blew out its cost base.

The group’s operating expenses increased EUR1 billion, or 7.3%, to EUR15.3 billion in the half. This increase was due largely to a 14.3% increase in the cost of materials and services, a generic term which includes fuel, fees and leases. Materials and services increased came in at EUR8.4 billion, which stemmed most significantly from a 24.6% increase in (post hedging) fuel costs to EUR2.4 billion. The strengthing euro also help offset fuel prices, with the common currency appreciating 6.5% against the dollar in the half. The fuel bill includes a positive result from price hedges of EUR434 million.

Fees and charges were also up sharply, increasing 17.8% to EUR2.2 billion. Lufthansa attributed this increase to higher traffic levels, air traffic control charges and take-off and landings fees. Germany’s new air traffic tax also hurt the group, costing Lufthansa EUR162 million. Staff costs, Lufthansa’s largest single cost item, increased 6.3% to EUR3.4 billion on the back of a 0.7% rise in headcount to 118,109. Staff costs greatly outpaced the rise in overall headcount, which was due to higher performance-related pay and higher additions to pension provisions.

Lufthansa managed to deliver a solid result, despite the larger-than-expected impact of events in the Middle East, Africa and Japan taking off some of the gloss. The airline group remains in a strong positions relative to some of its network peers, and the model continues to be cash flow positive despite cash bleeding some some of the smaller subsidiaries. The group increased cash flow from operations by EUR320 million to EUR1.7 billion in the half. Gross capex came to EUR1.4 billion, which is mostly expenditures related to aircraft acquisitions. EUR1.2 billion was for 28 aircraft, including three A380s, two A330s, seven A321s, two A320s, two B737s, two B767s, seven Bombardier CRJ-900s, two E195s and one ATR 700, as well as for overhauls and down payments. Lufthansa has EUR1.2 billion in cash on its balance sheet, a EUR135 million year-on-year increase.

There remains serious vulnerability to the macro-economic environment and movements in the euro, something which looks set to continue as sovereign debt concerns continue to weigh on consumer confidence and sap demand. Fortunately, Lufthansa’s major market, Germany, remains in a strong position, with unemployment falling, and consumer confidence and business investment rising. Lufthansa will benefit from ongoing strong conditions in Germany, particularly relative to airlines serving slower-growth countries in neighbouring markets.

The annual fuel bill has been revised down to EUR6.6 billion from EUR6.8 billion, due to Lufthansa’s strong hedge book. Lufthansa benefits from contracts if Brent crude trades above USD92/barrel. Its cost savings programme at bmi and Austrian Airlines, which seeks to cut costs by EUR1 billion from 2008 levels, will be wrapped up this year. Although with neither airline anywhere near profitability, it remains unclear whether cost savings targets and company restructures will continue. Its loss-making Italian unit, Lufthansa Italia, has also been closed down in a bid to help stem losses. Lufthansa said it is maintaining its target of increasing annual sales and operating profit.