Shares in Lufthansa lost 1.6% yesterday on the carrier’s third day of weak trade. Investors have had vast amounts of activity to digest since last Friday when the European Commission (EC) approved the carrier’s takeover of Austrian Airlines, which sent Lufthansa’s shares 1.6% upwards. The carrier has since announced codeshare services with JetBlue Airways and that “there is no improvement” in Business class demand.

Shares in British Airways were down 3.4% yesterday and Aer Lingus’ shares lost 1.4%. The Irish carrier is yet to release details of the cost cutting programme, which Aer Lingus previously stated it would launch in Northern Autumn 2009. The carrier reported a EUR93 million operating loss in 1H2009. CFO, Sean Coyle, stated the carrier “can't sustain operating losses of these levels, we can't sustain the kind of cash burn we've had in the first half of the year. We need to rebase our cost structure to live with the lower fares that our passengers are prepared to pay.” 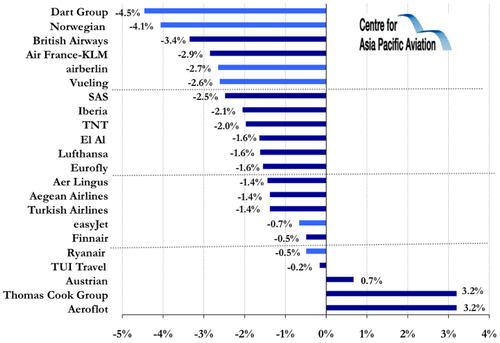