(This report appears in full in Airline Leader #53 under the title “Riders on the storm: Loyalty programmes can help airlines weather the challenges”)

The coronavirus pandemic is causing havoc in the airline industry. Loyalty programmes are helping airlines navigate the storm in various ways, with a strong focus on generating liquidity.

Recent disclosures by some of the world’s largest airlines project that their programmes are more valuable than the core airline. This projection and the ongoing crisis could be a catalyst for seismic change for loyalty programmes.

This is an extract from the report “Riders on the storm: Loyalty programmes can help airlines weather the challenges”, contained in  Airline Leader, Issue #53

Note: Since the publication of this report, two more US carriers followed the example of United Airlines. In Sep-2020, Delta Air Lines announced the formation of a wholly owned loyalty subsidiary, providing financing in the form of senior secured notes plus a credit facility. After an upsize, the total gross proceeds came to USD9.0 billion, at a blended average annual rate of 4.75%. In the same month, Spirit Airlines announced it raised a total debt of USD850 million secured by the core assets of its loyalty programme, including the cash proceeds from the co-branded credit card and the $9 Fare Club programme membership fees.

As the bottom fell out of travel in Mar- and Apr-2020, programme operators first turned their attention to adapting programme rules to cater for the new reality. Realising that travel was severely limited and would take considerable time to recover, programmes around the world shifted their attention to maintaining momentum with members, instead of the usual focus on travel. Many programmes waived elite tier requalification requirements, effectively extending the validity of the elite tiers.

Some programmes also offered revised expiry policies. Most critically, programmes turned their attention to non-air accruals, promoting partners in an effort to drum up loyalty currency sales and member engagement. Some programmes even afforded elite qualification credits on non-air spend, something which was fairly uncommon before the crisis.

At later stages, some programmes are starting to provide travel-related offers again. Air France-KLM’s Flying Blue programme
for example is offering double elite credits for the remainder of 2020. Although some feared a run on the bank, this did not happen, and although many programmes witnessed an increase in non-air redemptions, very few actually implemented any restrictions.

With the immediate changes out of the way, and cash becoming king in the fight for survival, the next step for some was to use the programme to generate liquidity.

The hunt for liquidity has tapped loyalty programmes

In what could be described as a testament to the severity and reach of the crisis, it was in fact the hotel industry, and not airlines, that first tapped their partners for cash.

As early as Apr-2020, Hilton pre-sold USD1 billion worth of Hilton Honors points to American Express, stating it would use the proceeds for working capital and general corporate purposes. 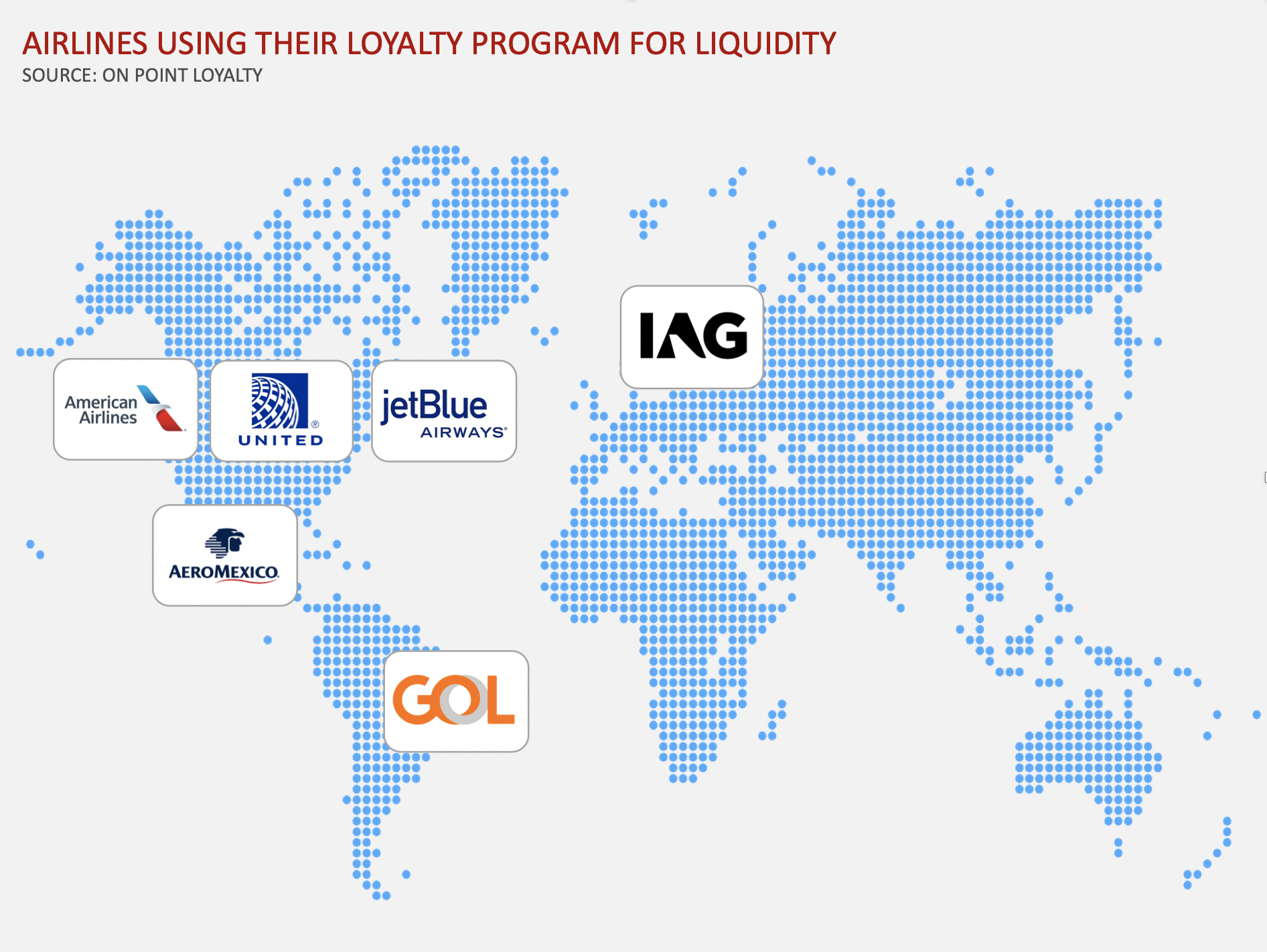 Over on the airline side, three types of capital generators could be witnessed: the preselling of points or miles to partners, pre-buying of award seats by separate loyalty companies and using the programme as collateral for loans.

JetBlue was one of the first airlines to generate liquidity through the pre-selling of TrueBlue points to its co-branded credit card partner Barclays. According to JetBlue CFO Steve Priest, the agreement was a good opportunity to get a small amount of incremental liquidity at attractive terms (the transaction was sized at USD150 million).

The ongoing attractiveness of the travel co-brands was underscored by American Express CEO Stephen Squeri during a 2Q2020 earnings call, stating that co-brand cards in the consumer business were actually performing better than some of the proprietary cards, including the Delta Air Lines, British Airways and Hilton co-brand cards.

In light of that comment, it was no surprise that in Jul-2020, IAG announced that American Express would make a payment to IAG Loyalty (the operator of the Avios loyalty currency) of approximately GBP750 million (USD981 million), a significant part of which would be a pre-purchase of Avios points.

Examples of airlines that have implemented this type of structure include Aeromexico, ANA, IAG, GOL and Lufthansa. Aeromexico announced in May that it would receive financial support from PLM (the operator of the Club Premier loyalty programme company) consisting of USD100 million using intercompany loans and award ticket advance purchases, funded by PLM’s cash on hand.

In a similar fashion, in Brazil, GOL announced the advance sales of reward tickets to its loyalty programme Smiles, for a total amount of BRL1200 million (c. USD225 million) bolstering its liquidity position.

The final category involves loans where the programme is pledged as collateral. In Jun-2020, American Airlines announced plans to pledge its AAdvantage programme as collateral for a government loan under the CARES Act.

But perhaps the most significant development occurred in Jul-2020 when United Airlines announced it had secured a USD5 billion term loan from Goldman Sachs, Barclays and Morgan Stanley using its MileagePlus programme. As part of the process, it offered highly detailed reporting around the performance of its loyalty segment.

Among other things, United revealed a 2019 EBITDA of USD1.8 billion (~26% of United’s adjusted EBITDAR) for MileagePlus, producing the equivalent of a 34% EBITDA margin against USD5.3 billion in cash flow from sales (~12% of United’s revenue).

The paradox of programme valuations vs airlines

As part of the airlines’ pursuit of liquidity, two remarkable things happened. For the first time in history, US majors were talking openly about the value of their loyalty segments. United estimated that the enterprise value of the programme was USD21.9 billion using a target EBITDA multiple of 12 (a discount to where publicly traded loyalty companies once traded).

American disclosed that an external appraisal yielded a value of between USD18 and USD30 billion for AAdvantage. This leads to the second remarkable observation: in both cases the projected value exceeded the current market cap of the airline.

This disparity is as much a reflection of the underlying core business dynamics of the two businesses (airlines versus loyalty companies) as well as a reflection of investor appetite for the respective businesses, resulting in different valuation multiples. Loyalty companies offer higher profit margins, a greater degree of control over the levers of profitability and are scalable and asset-light. The air transportation business on the other hand remains characterised by high levels of volatility and low levels of control.

The notion that the loyalty segment could receive a higher valuation than the airline business is hardly a new concept
in the industry. While this may sound counter-intuitive, the industry has witnessed multiple transactions in the market where the value of the programme exceeded that of the airline (most recently Virgin Australia’s programme received a valuation significantly higher than the airline itself).

It has been somewhat accepted as an inconvenient truth, with some observers describing it as “funny money”. Paradoxical as it may seem, an increasing number of arm’s length transactions are corroborating the hypothesis. Clearly, the fact that some of the world’s largest and oldest programmes are actively embracing this notion may very well be a watershed moment for the industry.

To read the full text of the report “Riders on the storm: Loyalty programmes can help airlines weather the challenges”, please go to Airline Leader #53, to download the entire 57 page issue free of charge.
See contents index below. 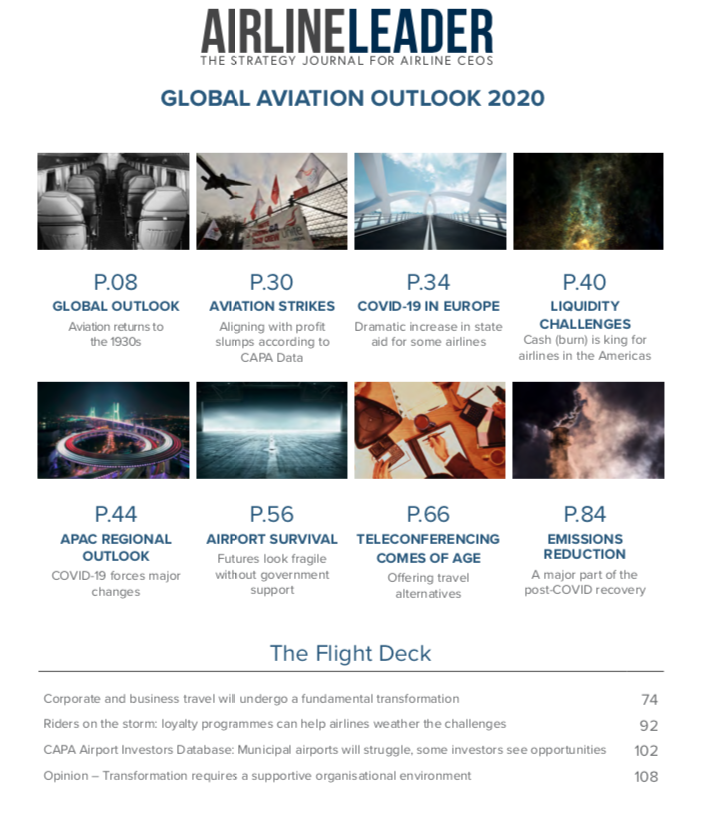