SE Lithuanian Airports has signed a EUR70 million loan agreement with the Nordic Investment Bank for the modernisation of Vilnius (the capital), Kaunas (second city) and Palanga (resort town) airports. The 15-year loan will finance the renovation of Lithuania's three primary airports.

The tourism potential for Lithuania is considerable – in 2019 tourists were mainly from Germany, Poland and Russia, increasing their traffic by 9%, 11.4% and 7.1% respectively. The average growth rate for the top 30 countries in 2019 was 11.3%.

Vilnius Airport’s ambitions are more modest than those of Riga

CAPA recently featured Riga Airport (Latvia) in a report, in which Riga is reported to be seeking to become a north European air traffic hub competing with major airports across northern Europe.

The ambitions within Lithuania for Vilnius Airport and the others are more modest.

All three states have experienced depopulation since they joined the European Union in 2004 and it has been most greatly marked in Lithuania, although it still remains the most populous country of the three. That has started to reverse recently since the UK left the European Union.

Vilnius is the second busiest of the three Baltic States capital city airports after Riga.

Other factors marking the ascendancy of Riga’s airport over that of Vilnius are the location of airBaltic’s main hub at Riga – logically as it is at the centre of the three states – where it has two thirds of the capacity, compared to 25% at Vilnius.

Also, the propensity for people living in the northern part of Lithuania to choose Riga Airport over Vilnius and Kaunas because of proximity, and because Riga offers a greater number of flight options.

For a decade overall traffic growth at Vilnius has been strong

In 2019, air passengers at Vilnius Airport totalled five million and grew by 1.7%. In the previous year the growth rate was 31%, but that is at least partly explained by the closure of the airport for two months during the previous year for runway repairs.

Overall, growth has been strong for over a decade. In only two of the years 2010-2019 were there not double digit growth figures. 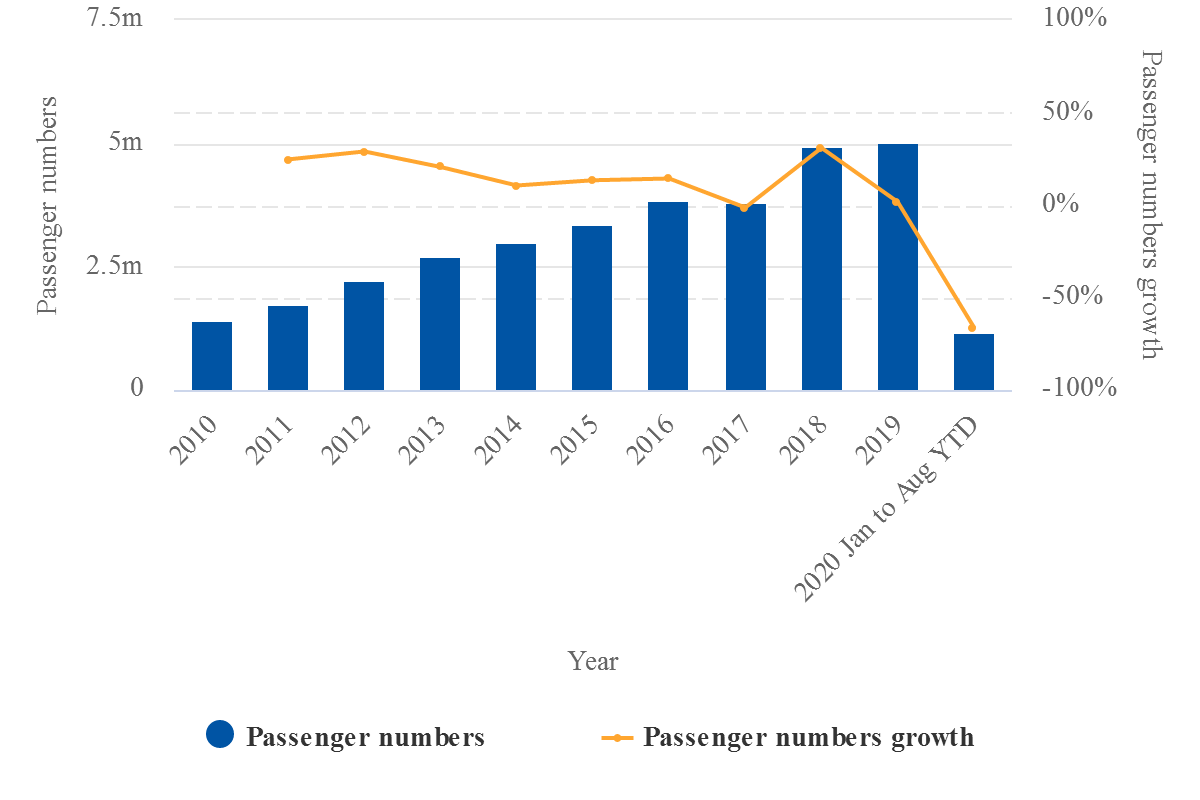 It is interesting to compare Vilnius with Riga, an airport which despite its greater size has not quite experienced the same level of growth, peaking at 14% in 2010 and 15% in 2019. In between, there was one year of negative growth and three from 1% or less to 5%.

Tourism still not as developed as it might be, but foreign visitor numbers are growing

So it is not unreasonable for Lithuanian airports to be looking beyond the pandemic to the resumption of services in support of what is only nascent growth of a tourism industry, which, until recently, was not particularly well co-ordinated. And possibly to Lithuania even taking over from the other two states as the leading tourist country.

See these two reports from 2015 focused on the wet-lease airline Small Planet Airlines, which became Lithuania’s main airline, even though it offered no scheduled services, but which later collapsed after overextending itself in other countries.

The tourism potential for Lithuania is considerable, ranging as it does over a unique product.

This embraces: its complex historical context under Poland and the Soviet Union, being a crossroads for many cultures, its religious (and pagan) background, unique architecture, UNESCO World Heritage Sites, a small, green capital with a compact downtown containing a picture-postcard medieval Old Town, a much improved culinary offer, a lively second city that constantly competes with the capital, broadly 1000 tourist sites around the country that include oddities like a hill of crosses and a Cold War Museum complete with ballistic missile silos.

All this together with endless forests, 2,850 lakes, five national and 30 regional parks, and a well developed set of beach resorts on the Baltic Sea, centred on and around Klaipėda (the third largest city), the resort town of Palanga, and the smaller resort of Nida.

In 2019, only two of the top 30 countries for tourist visits to Lithuania, Denmark and Japan, showed a reduction compared to 2018.

Kaunas, while also a tourist centre, is more important for economic and academic reasons. In 2019 traffic grew by 14.9%, which is considerably more than at Vilnius. 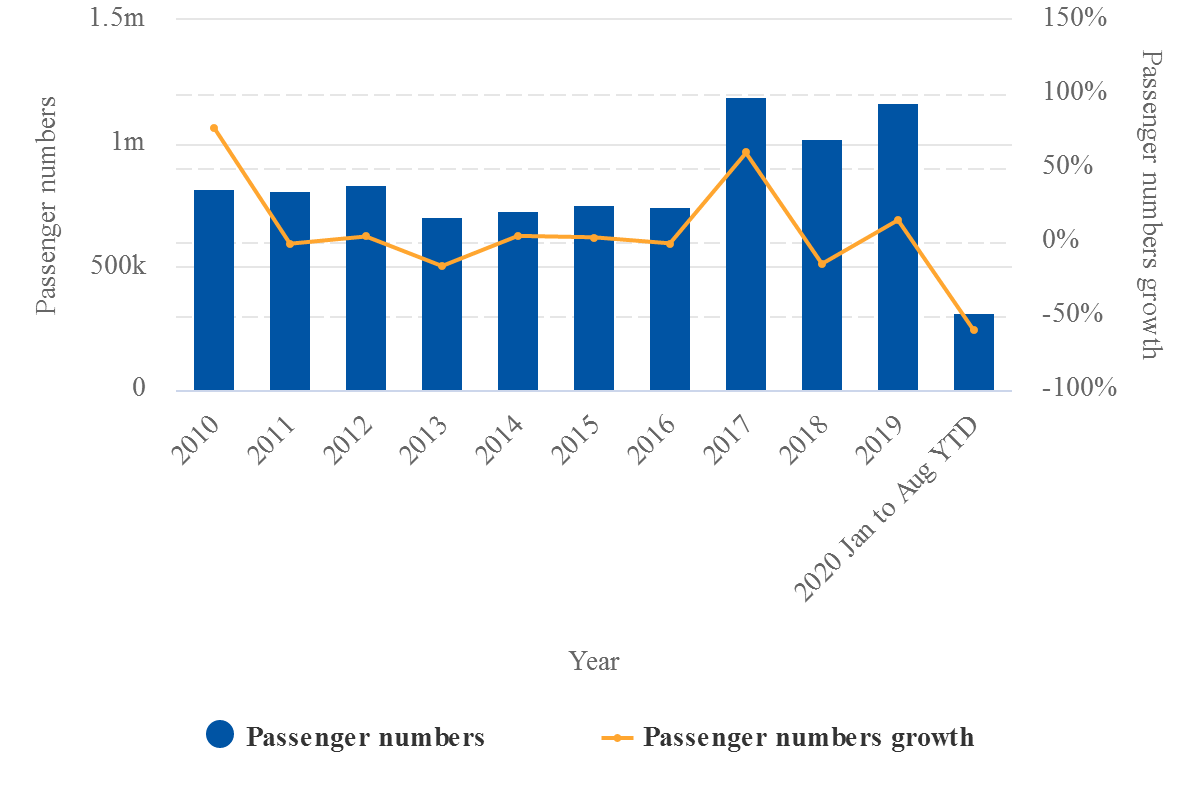 Kaunas Airport is possibly unique in Europe as its capacity for a short time in May-2020 was actually higher than it was before the pandemic, and its overall recovery has been a very strong one. Its principal airline (of two) is Ryanair, followed by Wizz Air.

Palanga Airport has a surprisingly broad airline base

Palanga’s airport, on the Baltic Sea coast, exists primarily for tourism, but it actually has a wider range of airlines, including airBaltic, SAS, Ryanair, Wizz Air, Wizz Air UK, and Norwegian Air Shuttle, which is the largest by seat capacity.

Traffic growth reached 60% in 2016, but that was an exceptional year. This region is quickly forcing itself onto the tourist ‘must visit’ list, despite its short summer season, and there are flights from throughout northern Europe and the UK & Ireland, which double as expat worker flights. A good example of that is an unusual Ryanair service from Glasgow, Scotland (currently not operating).

As with the other two airports, Palanga has recovered from (in its case) a drastic loss of capacity in mid Mar-2020, and has 80% of its capacity back now. 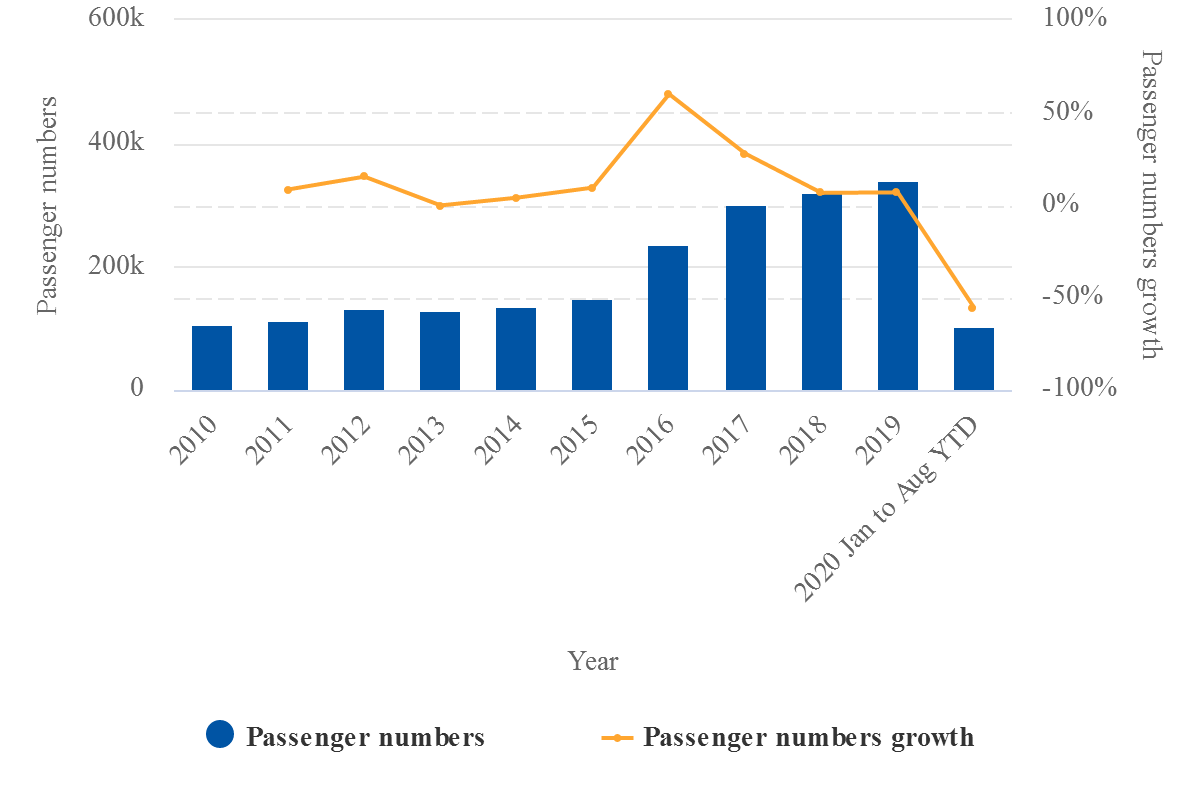 The EUR70 million, 15-year loan agreement for the modernisation of Vilnius, Kaunas and Palanga airports, signed by Nordic Investment Bank (NIB) and the State Enterprise Lithuanian Airports, will finance the renovation of these three airports. The modernisation is intended to improve the quality of services and ensure safer and more efficient airport operations.

Henrik Norman, President and CEO of NIB, said: "Upgrading the infrastructure will allow Lithuanian airports to adapt to future passenger traffic growth when the COVID-19 pandemic is under control."

The loan funds will also be used for the modernisation of all three airports, as well as for the reconstruction of the runway in Palanga.

Marius Gelžinis, Head of Lithuanian Airports, said: “All investments in the improvement of the Lithuanian airport network infrastructure are planned to pay off within a period of 10-15 years. It is also important to mention that the development and renewal of the existing infrastructure is one of the two main directions of our business strategy, the strategy includes the development of the existing network and preparation for the future (the possibility of a new airport).

The reference to “the possibility of a new airport” has been featured in a previous CAPA report, from Jul-2019. It is proposed for construction between Vilnius and Kaunas, but would not be ready until 2035, around a decade later than the ‘Central Polish Airport’ in its neighbouring country.

A full report on that proposal can be found at: Lithuania plans a new central airport for Vilnius-Kaunas

The bank finances private and public projects in Member States and beyond. NIB has the highest possible credit rating of AAA / Aaa from the leading credit rating agencies Standard & Poor’s and Moody’s.

The pandemic has been kept under control, relatively speaking, meaning minimal economic impact

As regards the pandemic, Lithuania has been less affected than many countries, with 4385 cases as of 27-Sep-2020, although that rate has been increasing steadily since the beginning of Sep-2020. 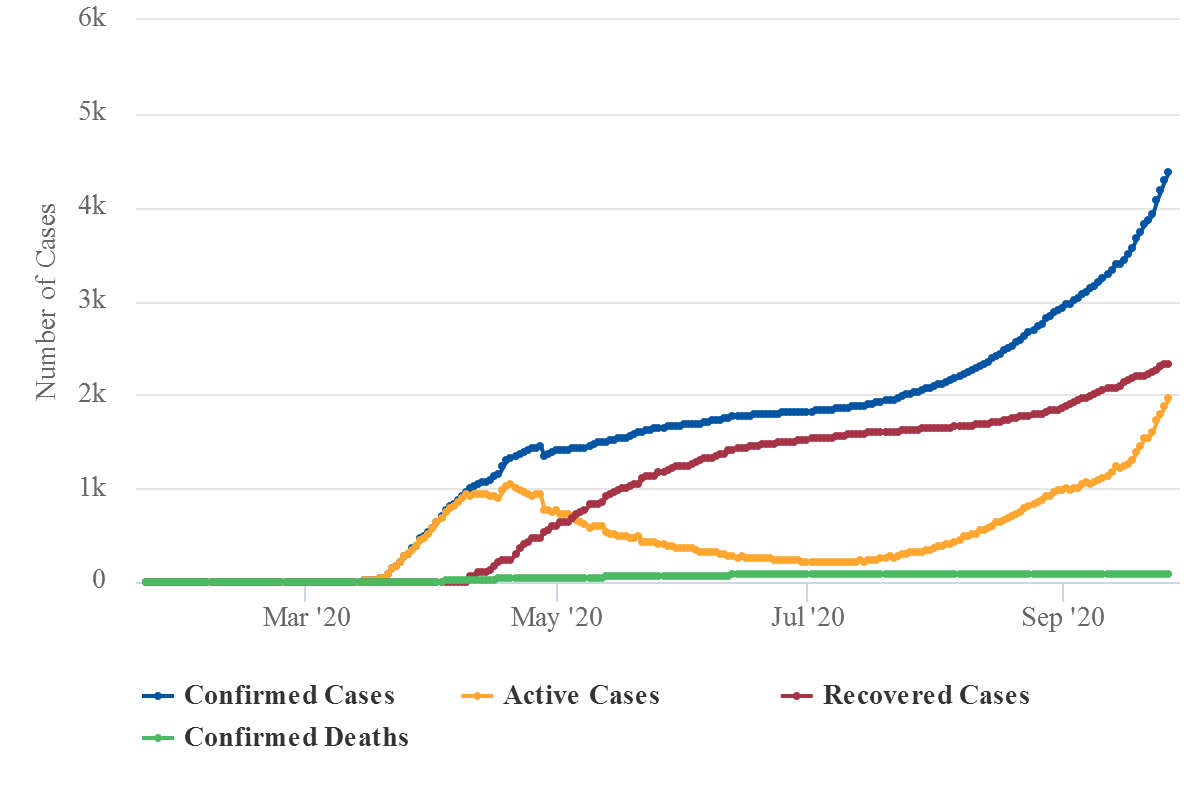 Accordingly, with the relatively low spread of the coronavirus, the Lithuanian economy has so far suffered less from it than have many other countries, meaning a relatively smaller economic downturn, securing of the country's industrial structure, and rapidly recovering consumption.

Lithuania's economy is projected to contract by only 2% in 2020 and to recover by 3.1% next year, according to the baseline macroeconomic scenario, the country's central bank says.

Recent indicators confirm that the main sectors of the economy, such as industry, trade, and exports, have already reached or almost reached pre-pandemic levels, and that most of the economy can function normally according to Vitas Vasiliauskas, board chairman of the Bank of Lithuania.

Mr Vasiliauskas added that this "fragile respite" must be used in such a way that Lithuania allocates state funds and an envisaged European Union support package to mitigate the effects of the pandemic by purposefully planning long term investments to transform the economy and solve long-standing problems.

Which is what SE Lithuanian Airports and NIB between them are doing.

SE Lithuanian Airports reported  intensive brownfield management and conversion works will begin at Vilnius, Palanga and Kaunas airports in Oct-2020. Areas around the airports previously used for military purposes during the Cold War will be converted into attractive spaces suitable for business development, including a 60-hectare area around Kaunas International Airport.