There is a growing propensity towards the concept of a new and centrally located airport to act as the main gateway in parts of Europe. Poland is the leader in this, having identified possible sites to the south of Warsaw, which could be connected multimodally to the main cities by high-speed rail.

Now, Lithuania is considering something similar, except that in its case a new airport would be situated between the capital, Vilnius, and the other main city, Kaunas.

It is a long way in the future, and if a decision is taken in its favour, considerable advance planning needs to be done in respect of transport links and terminal design.

Poland’s decision may have influenced Lithuania

Lithuania's Minister for Transport and Communications Rokas Masiulis said recently that the Ministry is considering the construction of a new airport, located between Vilnius and Kaunas.

Mr Masiulis said the considerations are prompted by increasing passenger traffic growth in Lithuania, adding, "If this large growth in passenger flows continues, we will have no choice as we will need a new airport". Mr Masiulis said the decision on construction is expected to be made in 2022, with the airport potentially completed by 2035.

The announcement was made just as the country’s President, Dalia Grybauskaitė, emerged as a serious contender to replace Jean-Claude Juncker as European Commission President.

To what degree Poland’s decision on a new ‘central’ airport has influenced the Lithuanians is unclear. Apart from Russia, Poland is the leading power in the region and Lithuania once formed a commonwealth with Poland. (It has also been part of both the Soviet Union and the Russian Empire).

So Lithuania is at least likely to pay attention to aviation developments in its south-western neighbour. 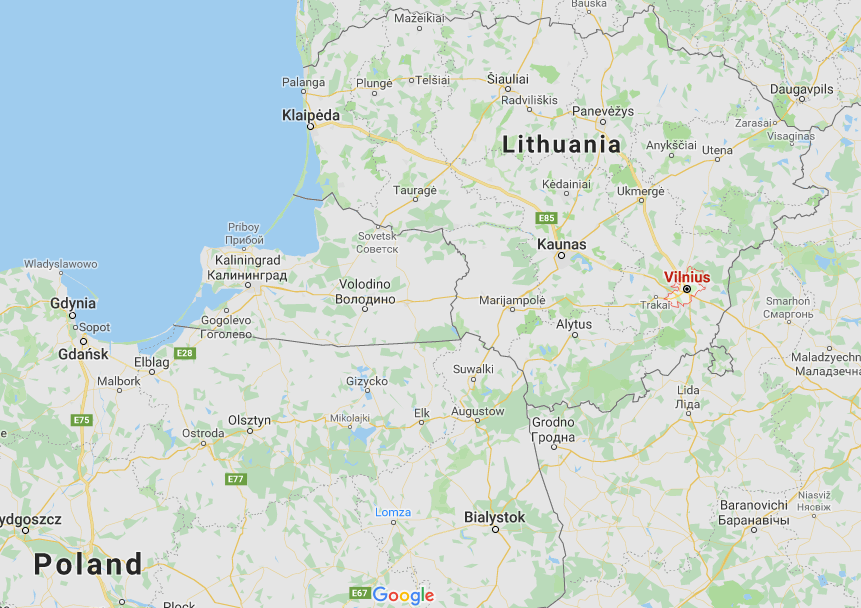 Kaunas is a historical centre of economic, cultural and academic life

While Vilnius is the capital and largest city, Kaunas is a significant city in its own right. In fact, the population of its ‘metropolitan area’ is not that dissimilar to that of Vilnius, and it is regarded as being the historical centre of Lithuanian economic, academic, and cultural life. The two cities are only 92 km (57 miles) apart, so a centrally located airport might be less than 45 km/30 miles from the centre of each. They are connected by rail (1 hour 10 minutes journey time) and road (E85 highway).

Both their airports, together with the one at Palanga on the Baltic Sea coast, have been owned and operated by the state entity SE Lithuanian Airports since 2014.

In 2016 a concession agreement was formulated that is said to have attracted the attention of Fraport, Manchester Airport Group, Vinci Airports, Avialliance, Egis Group and Ferrovial, but which has not yet led to a completed deal, and the new airport project has emerged as an alternative to concessions on the existing ones.

Vilnius is the busier of the two airports, with 4.9 million passengers in 2018 compared to just over one million at Kaunas. Kaunas is growing faster this year to date and experienced its busiest-ever month in May-2019, exceeding 100,000 passengers.

Comparing the airline business models at each, although Vilnius has a better mix of full service and low cost airlines (albeit oriented towards the latter), Ryanair is pre-eminent at Kaunas, with two thirds of seat capacity.

Kaunas has a predilection towards West European services (87.6% capacity) whereas Vilnius offers a larger balance of East European flights, in keeping with its status as one of the most economically important centres in the Baltic States.

In both cases, the United Kingdom is the leading destination and in Kaunas’ case – by almost three times the second-placed destination. That is partly explained by the level of emigration to the UK since Lithuania joined the EU in 2004, which has actually depopulated the country from a high of 3.7 million in 1990 to 2.8 million now.

Both cities are competitive, especially where tourists are concerned…

It would be fair to say that there is healthy competition between the two cities, especially competition for foreign tourists.

When Vilnius Airport closed for three months for urgent runway repairs in 2017, all flights were diverted to Kaunas, which was able to handle them without undue problems. (An amusing promotional video was produced at the time, which sought to capitalise on the disruption and heavily sold Kaunas as a better option than Vilnius for tourists).

While such rivalries are friendly (there was no known reciprocation from Vilnius), Lithuanian Airports might well benefit from a joint airport in the long term.

Since the runway was repaired at Vilnius the airport has begun to refurbish the terminal, enhancing passenger capacity. Daily capacity will increase to 20,000 passengers and at a cost of EUR60 million/USD75 million.

Furthermore, that cost will rise to EUR130 million/USD145 million by 2022, with another planned project that includes provision for the development of a VIP terminal and a multi-storey car park facility, as well as a passenger terminal and apron expansion works.

There are no known capital expenditure projects at Kaunas Airport presently.

In Vilnius’ case, this is just fire-fighting. Apart from expatriate travel (which may go up or down, or switch destinations, according to political trends), tourism is yet to reach anything like its potential.

This is despite Lithuania and the Baltic States being identified as a ‘hot ticket’ in many travel magazines. In 2017 (the latest figures available), 3.25 million visitors stayed in Lithuanian hotel accommodation, however that is not segregated into domestic and foreign, and many foreign visitors will arrive by car or train from surrounding countries.

So a new airport may well be justified, and possibly before 2035. A possible site could be at Elektrėnai: approximately halfway between the two cities, on the border of the Vilnius and Kaunas counties, on the E85 highway and close to the existing rail line.

A fast rail connection is essential

But that standard rail line is inadequate. A new high speed line, Rail Baltica, should open by 2026, connecting many Baltic States and also Warsaw, Poland, with up to 14 trains each day on the section between Vilnius and Kaunas. Even then, a dedicated, frequent airport rail service from both cities would be needed.

Terminal design – the future for LCCs

Lithuanian Airports also needs to consider the configuration of the new airport, well in advance of its opening date.

Statistics show that international LCC seat capacity fell from 65.8% in 2011 to 56.4% in 2018. If that trend continues, a hybrid terminal may be required rather than separate full service/network and low cost terminals, bearing in mind also that Lithuania does not have, and might well never have again, a flag carrier airline of its own. 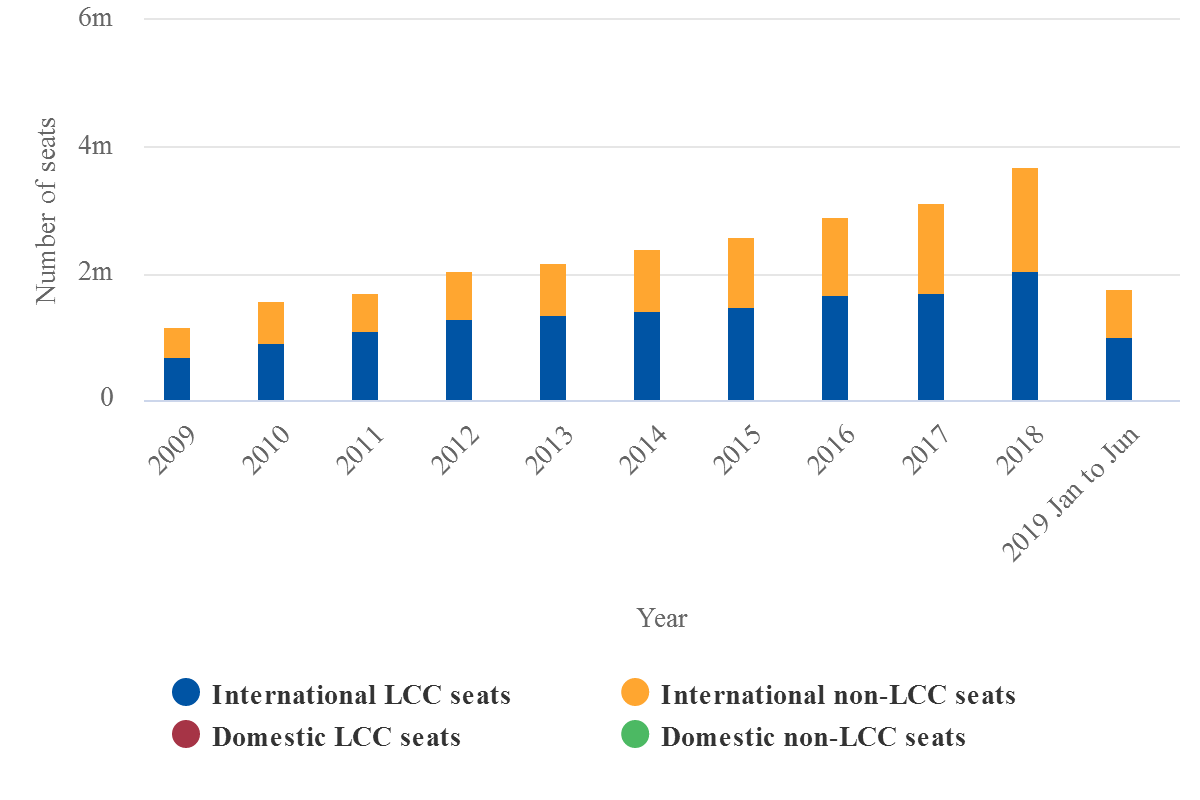