A recurring theme in CAPA reports recently has been airports that have publicly committed to pressing ahead with infrastructure development irrespective of the present situation. In some cases the reasoning has been that of securing or gaining strategic advantage, in others it has been to do with an environmental agenda.

In the case of Lima Airport Partners – an organisation 80% owned by Fraport – it is neither; merely a statement of the strength of both it and the parent company and of its ability to attract international financial organisations to finance it in the midst of what is a battle for the entire industry to survive and prosper.

Lima Airport's airside development is strategically important, not only for the airport, but also for Peru and South America. LIM serves as a major and popular hub airport for the South American market.

Dr Matthias Zieschang, Fraport AG’s chief financial officer, said, “This transaction is of paramount significance for the development of Lima Airport. Secured in a very challenging environment, this financing agreement sends out a strong and positive signal about Lima Airport Partners and the entire Fraport Group. Furthermore, the transaction underscores the strong interest and demand from capital markets for financing well-managed airports that have a long-term and positive perspective – such as Lima Airport Partners with its major South American hub airport.”

Fraport “to register a positive EBITDA in its international segment”, even this year

He said, "Abroad, our depth of added value is much lower than in Frankfurt. This means that costs can be reduced even faster and more strongly in the short term".

Lima is the leading example of Fraport’s strengths in its external market. In a recent CAPA report on Fraport’s 1H2020 financial report it was revealed that with the exception of the Lima subsidiary (Lima Airport Partners, in which Fraport now has a 80% stake), all of Fraport’s international airport subsidiaries had made negative contributions to the group’s financial performance.

That ownership level at Lima, which was increased from 70% in 2019, stands in contrast to Delhi Airport, for example, where it is only 10%, and where in the past Fraport has expressed frustration at the lack of influence it can sometimes bring to bear on events there.

Well positioned to act as a local, regional, and intercontinental hub

Although situated on the Pacific coast, LIM is well positioned to act as a hub between South American countries, between those countries and Central and North America, and intercontinentally both eastbound and westbound.

Foreign airlines, including LATAM divisions, are the main airlines

While only 20% of capacity at this time is international, almost 90% of seats are provided by foreign airlines.

Passenger traffic growth has been consistent throughout the last decade, with double digit growth achieved in half of the ten years 2010-2019, along with an attendant growth in seat capacity. 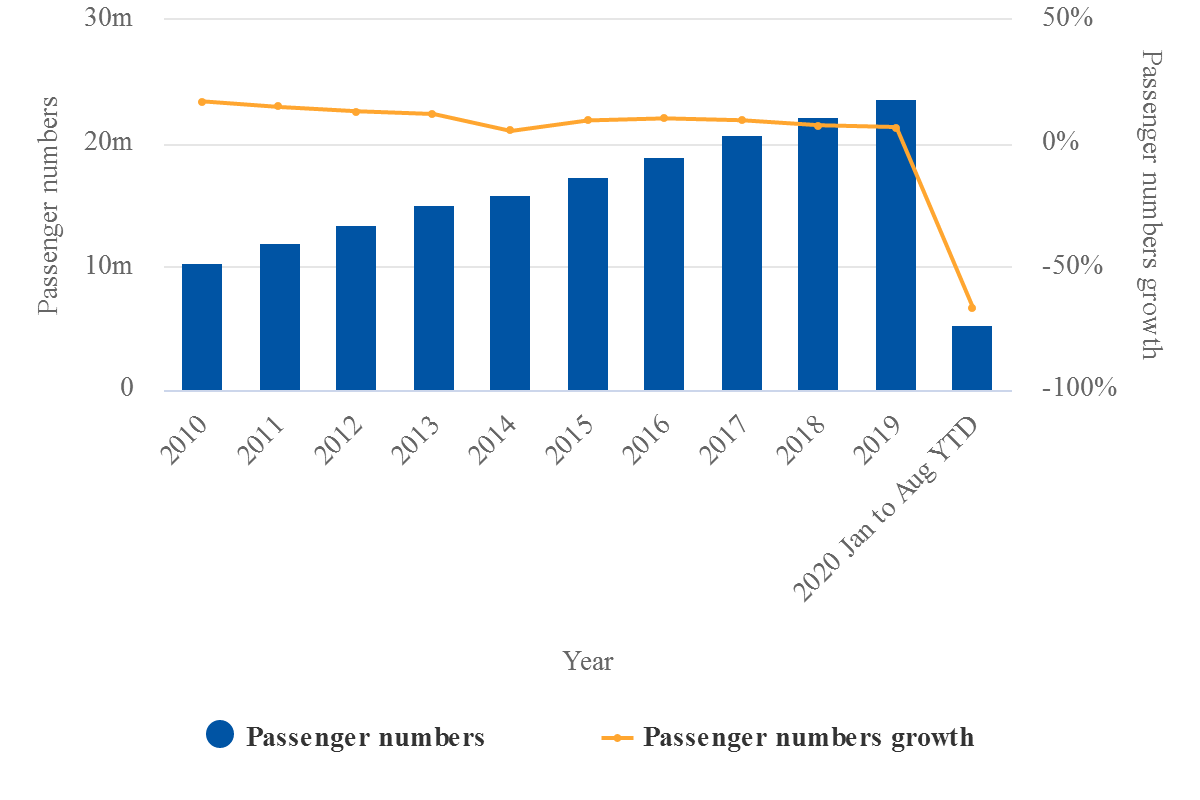 Second virus wave may have peaked

In the period Jan-2020 to Aug-2020 passenger traffic has dropped by 67%, which, although dramatic, is a better position than some others, and is a marginal improvement on the figure at Fraport’s main Frankfurt Airport (-68.4%).

That position is largely explained by the catastrophic decline in capacity in Mar-2020, which was experienced by so many other airports.

Peru imposed one of the earliest and strictest lockdowns in Latin America to stop the spread of coronavirus – but still saw cases of infection rise rapidly.

The progression of infection since then has hardly been uniform, with a difference of almost 5,000 new cases between just two days in early September, but the overall trend does now seem to be downwards (there was a similar staccato decline following the first peak).

Leading the aviation recovery at Lima is the umbrella of LATAM, which had almost 56,000 seats on offer in the week commencing 14-Sep-2020 – which is more than all the other airlines currently operating combined, accounting for 68.5% of capacity. That is despite LATAM Airlines Peru, along with other divisions, filing for bankruptcy in May-2020. 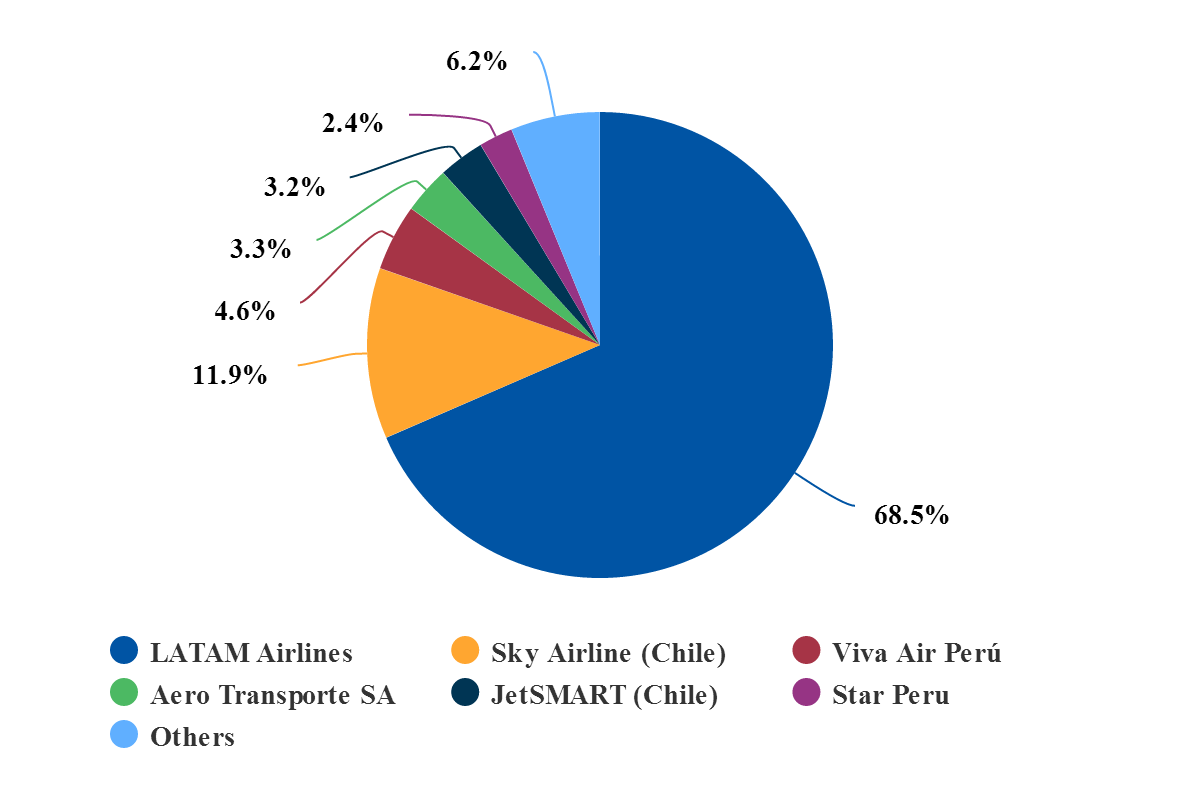 Lima’s significance as a hub is evident from this chart, which shows that while exactly 60% of seat capacity is on flights involving ‘upper’ and ‘lower’ South America, both Europe and North America remain well represented. 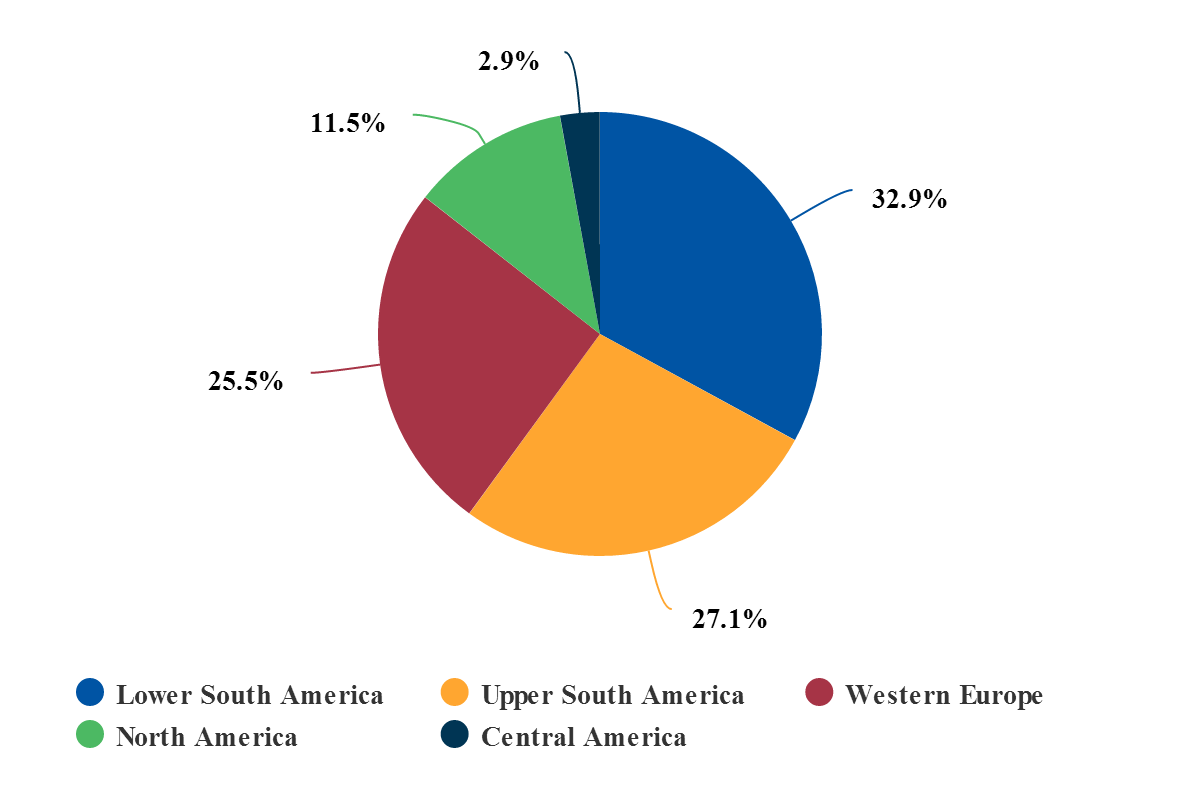 Chile has the greatest number of seats, followed by Brazil, but then Spain, the USA, and the Netherlands. 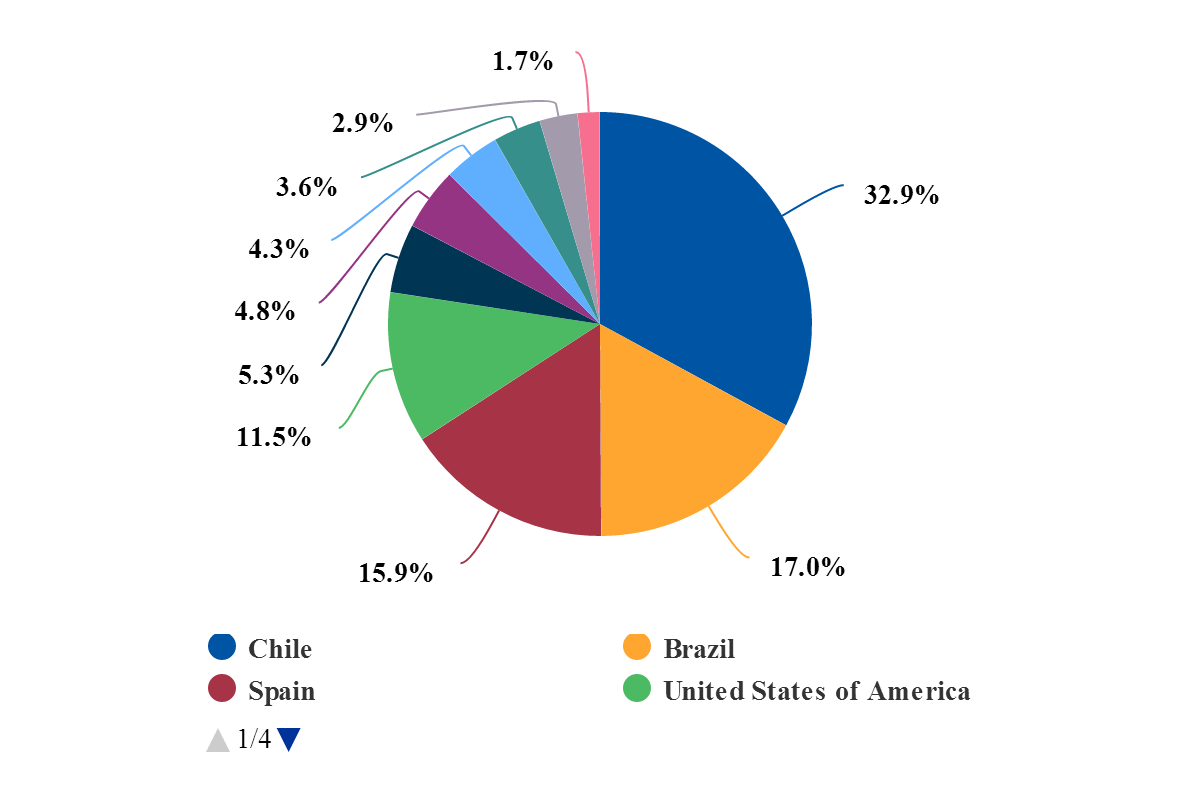 Remarkably though, despite all Lima's other hub credentials, one thing the airport does not have is strong representation from the airline alliances.

SkyTeam has 2.6% of seat capacity and oneworld less than 1%. The Star Alliance has no representation whatsoever.

Contrasted with Frankfurt, where Star Alliance has 70% of capacity and unaligned capacity amounts to only 22%. 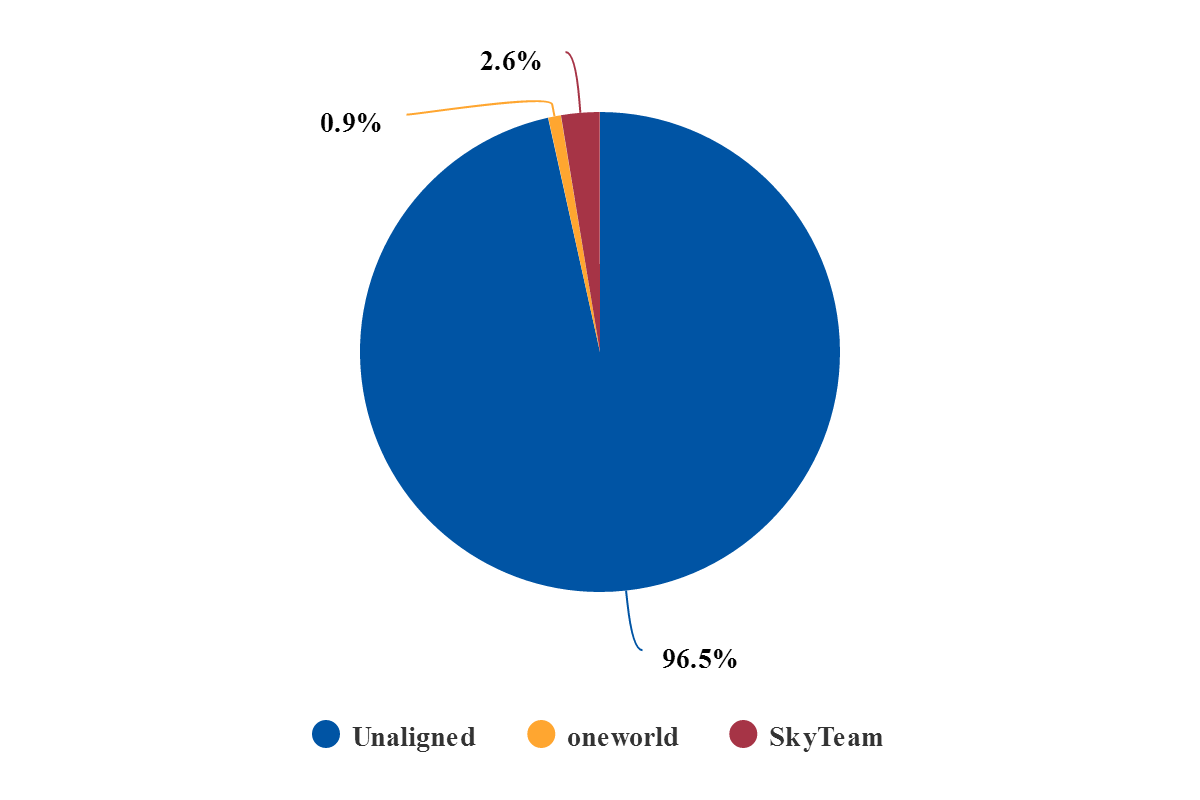 But full service carriers have the bulk of seats

Despite that fact, however, more than 72.3% of Lima’s capacity is on full service carriers, with low cost carriers accounting for just 22.6%. 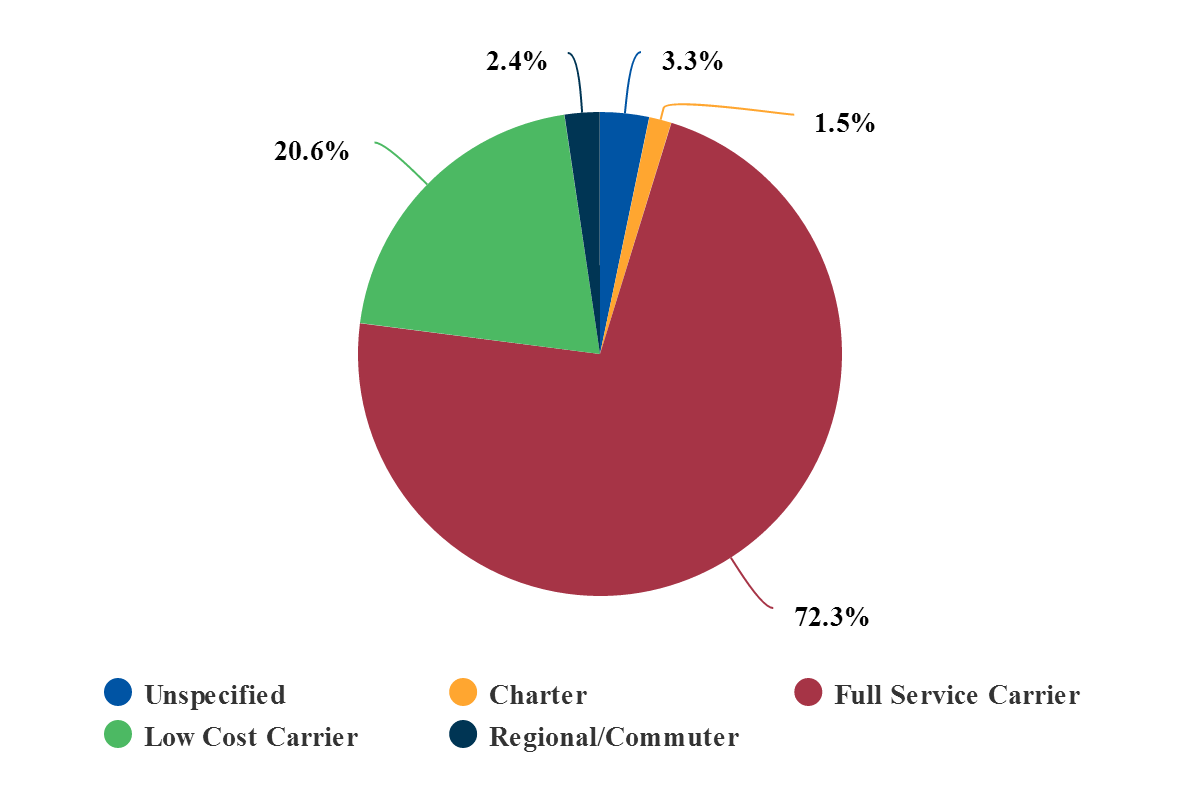 Lima’s financial record is as good as Frankfurt’s

Financially, Lima Airport has achieved a consistent EBITDA margin of 33% to 34.4% over the past three years (2017-2019). That is marginally better than Frankfurt Airport’s EM in the same period.

Foreign operators seem to be acquiring a taste for this part of the world. In neighbouring Ecuador, President Lenín Moreno confirmed in Aug-2020 that Korea Airports Corporation would operate Manta Airport there, and is expected to invest USD182 million in airport infrastructure.