Leasing companies have a Farnborough field day, committing to more than 400 aircraft

Leasing companies stepped into centre stage on the second day of the 2014 Farnborough Airshow, with a flurry of high value orders.

Since the beginning of the airshow, eight aircraft lessors announced a wide range of orders, totalling more than 400 aircraft, valued at over USD35 billion at list prices.

In particular, lessors have jumped on the chance for early orders for Airbus’ new A330neo. 65 of the 105 firm orders and commitments for the aircraft, launched on 14-Jul-2014, came from leasing companies.

Ordering for next generation narrowbodies also remains particularly strong, with lessors accounting for nearly 250 orders for the Boeing 737 MAX and the Airbus A320neo so far at Farnborough.

The ordering by leasing companies is a continuation of the trend for very large orders seen at recent airshows. It also highlights the increasing importance of leasing companies as major customers for aircraft manufacturers.

Since 2000, the share of the world’s aviation fleet owned, managed or on order with leasing companies has increased from around 25% to around 48% at the end of 2013. Airbus and Boeing forecast that beyond 2020, 50% of the global commercial aircraft fleet will be controlled by leasing companies. 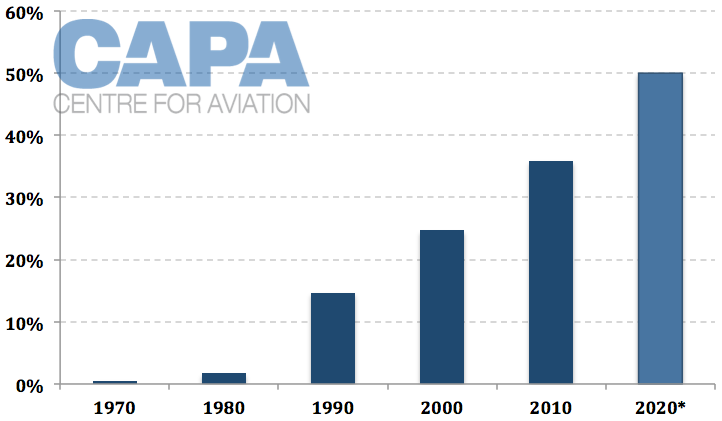 One of the largest orders was made by SMBC Aviation Capital, which signed a firm deal with Airbus for 115 A320 family aircraft. The deal, comprising 110 A320neos and five A320ceos, is the industry’s largest ever single firm order for narrowbody aircraft by a leasing company. At list price, it is valued at about USD11.8 billion.

The A320neo order also takes firm orders for the type past the 3000 milestone. Since the launch of the programme in Dec-2010, 57 customers have ordered a total of 3090 A320neos. Airbus claims this represents a 60% market share in the narrowbody market segment. The first completed A320neo was recently rolled out by Airbus, with testing due to commence in Sep-2014, and first delivery scheduled for 4Q2015.

The test fleet will comprise eight aircraft: two A320neos, one A319neo and one A321neo for each of the new engine choices: Pratt & Whitney’s PW1100G-JM and the CFM International LEAP-1A.

Also expanding its A320 commitments, BOC Aviation announced an order for an additional 43 A320 family aircraft, comprising seven A320neo family aircraft and 36 A320ceo aircraft, across A320 and A321 variants. Including this latest purchase agreement, BOC Aviation’s cumulative orders for new Airbus aircraft have reached 255, as of 30-Jun-2014. 142 of these have already been delivered, and another 55 are committed to lease.

BOC Aviation MD and CEO Robert Martin said that by adding this order to the company’s existing pipeline for the next five years, BOC Aviation is confident that it can meet the needs of airlines which are expanding or replacing older fleets.

The first eight A320ceo aircraft from this order, all powered by IAE V2500 engines, have already been placed with customers.

Air Lease Corporation (ALC) has been involved in some of the heaviest ordering, making orders for everything from turboprop regional aircraft all the way through the popular narrowbodies and high-demand long-range twin-jet widebodies. The company also made several engine selections for narrowbody aircraft.

ALC made commitments and firm orders for:

CIT Aerospace announced commitments and firm orders for 30 aircraft on the first two days of Farnborough. The company has become a launch customer for the new A330neo, signing an MoU for 15 A330neo-900, the larger of the two-aircraft family. Deliveries of the aircraft are scheduled to begin in 2018.

CIT also signed an MoU for five A321ceo, confirming the continuing trend towards ordering of higher capacity narrowbody aircraft. Deliveries of the A321ceo aircraft are scheduled to begin in 2015.

Boeing also saw an order from CIT, in the form of 10 787-9s, valued at USD2.5 billion at current list prices. This brings the leasing company's total 787 orders to 20, including 16 787-9s. CIT Group president Jeff Knittel commented that the aircraft will add to its growing fleet of fuel efficient aircraft that remain in high demand from airlines. The first 787-9 is due to enter service with Air New Zealand later this year.

Intrepid Aviation confirmed the popularity of the current Boeing 777 family, with an order for six 777-300ERs, as well as options for six more. This is Intrepid Aviation’s first direct 777 order. If all options are exercised, the value of the announcement could reach more than USD3.2 billion at list prices.

Small as they are, the Intrepid and Air Lease Corp orders will help Boeing in its quest to bridge the production gap between the current 777 family and the next generation 777X. At current production rates, Boeing had 273 unfilled 777 orders at the end of Jun-2014, enough for around two and a half to three years production at current rates.

With the 777X due to commence production in 2018 and production not due to fully switch over to the 777X until beyond 2020, Boeing has a gap of several hundred aircraft it needs to close, otherwise it risks having to slow 777 deliveries.

Airbus and Avolon reached an MoU for 15 A330neo aircraft, making Avolon the launch customer for the type. Aircraft deliveries will commence from 2018. The order is valued at USD4.1 billion at list price. With the order, Avolon's owned, managed and committed fleet is 220 aircraft.

Commenting on the order Avolon CEO Domhnal Slattery said it “represents an additional investment in the neo range of aircraft which follows our previous commitment to the A320neo”.

AerCap was one of the biggest orders on the first day of Farnborough 2014, exercising options for 50 A320neo aircraft. The contract is AerCap’s first major aircraft order following the acquisition ILFC earlier in 2014.

The 50 options were originally part of an ILFC/Airbus agreement signed in 2011. AerCap will announce its engine selection in due course. Deliveries are expected to commence in 2015.

Another major first day order was from Nordic Aviation Capital (NAC), which announced a deal with ATR for 25 ATR 42-600s, the smaller of the new -600 turboprops. The company also took options for another 50 of the same aircraft, pushing the value of the deal to USD1.55 billion, if all options are exercised.

ATR will deliver the aircraft from 2015 through to 2020. NAC made the order after witnessing strong demand in the regional turboprop segment. ATR commented that the replacement market for sub 50-seat turboprops is “very under-served”.

Leasing companies are here for the long-haul

With demand for new aircraft seemingly growing unabated while air traffic is growing strongly in the developing world and recovering in traditional markets, aircraft lessors are confident that they will find homes for their new aircraft. With ordering horizons stretching well beyond 2020, lessors are playing a long game, willing to ride out temporary downturns on the expectation of strong long-term air travel growth.

As fuel prices remained around USD110 per barrel for the past four years, airlines have adjusted to a new era of high fuel prices, and have been pressuring aircraft manufacturers to bring more advances to the table. With their access to finance, international reach and ever-closer relationships with aircraft manufacturers, lessors are providing an avenue for airlines to ensure they can get the newest aircraft available.

Lessors continue to experience success in placing aircraft across all market segments, providing airlines and their passengers with newer, more efficient and more comfortable aircraft.