As of 01-May-2016, the global fleet order backlog stands at 12,711 aircraft, 64.9% of which are narrowbodies. Measured by units, aircraft on order overall stand at 42.7% of the in-service fleet. If measured by capacity, the order book is larger still as the mix of aircraft on order favours larger aircraft, which continue to replace smaller aircraft. The current in-service fleet represents 3.8 million seats, compared with an order book that amounts to 62.5% of this.

By contrast regional aircraft make up 32% of the operating fleet, but only 12.5% of the order book. Meanwhile narrowbodies, which comprise 46.9% of in-service fleets, account for 64.9% of orders. Widebodies comprise 13.6% of in-service fleet but 20.2% of orders. The order backlog is largely accounted by Boeing and Airbus narrowbody aircraft, representing 66.6% of the backlog at 10,277 aircraft. This also comprises 79.3% of the in-service fleet of the two types. Have the airlines and lessors over-ordered A320neos and 737 MAX? 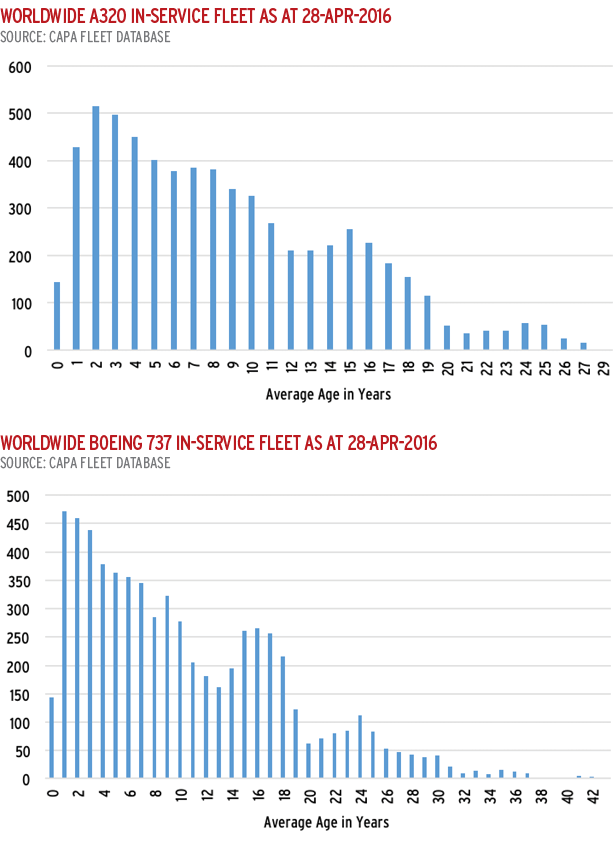 Answering this circular question depends directly on the actual rate at which capacity grows. The airline industry has achieved long term revenue passenger traffic growth of about 5%, a level Boeing expects to continue over the next 20 years, while Airbus is slightly more conservative at 4.6%. Still, a 4.6% growth rate in the narrowbody sector implies over 500 net new 737s and A320s annually. This may actually underestimate the demand as the trend to replace smaller regional aircraft with the single-aisle A320 or 737 type means these aircraft take an increasing share of the market, as implied in the order backlog.

On this reckoning, airlines and lessors are in the right zone in ordering this number of aircraft. Indeed, Boeing anticipates open demand for 30,630 single-aisle aircraft by 2034 – more than double that in service in 2014.

However as oil prices have weakened through 2015 and 2016 (although currently displaying some tentative strength), the appetite for the fuel efficient neo and MAX may have waned. Jetstar Pacific explained this phenomenon most concisely – speaking at the CAPA Airline Fleet & Finance Summit 2016, COO Leslie Stephens explained low oil prices have caused the carrier to reassess its plan to move to an all-A320neo fleet by 2018, presuming oil prices remain below USD60/barrel and A320neo pricing remains high. 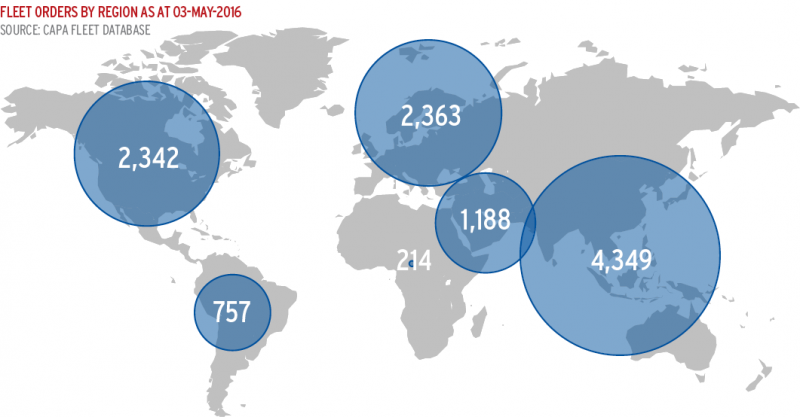 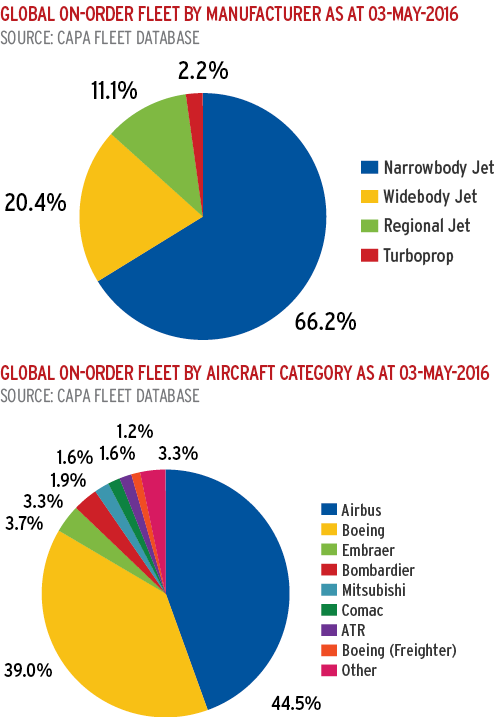 Mr Stephens explained: “About a year ago, we sat down and did the numbers… That model no longer makes sense for us. We’re looking at double the cost of our fleet over the next two to three years if we go in that direction.” Mr Stephens continued: “Right now we can get a comparable ceo for much less than an A320neo,” but added: “A couple years ago used A320s were easily available, I don’t know of any that are available right now that are less than 10 years old.”

Oil prices are unstable and forecasts can rarely be relied upon – airlines will need to think beyond the current horizon of cheaper fuel, but the waters have been muddied.

The Asia Pacific region remains the standout area of growth in the global airline fleet market, with almost the same total of orders as Europe and North America and an orders vs in-service fleet ratio of 54%. Not only does it have the largest backlog of aircraft on order, but also the youngest average age of in-service aircraft.

The largest commercial airline fleet is in North America, but only Africa has an older fleet by average age. The average fleet age of North American airlines is almost seven years greater than the Asia Pacific fleet and yet Asia Pacific has more than double the aircraft on order than North America.

(Note: When an order is placed with a lessor, CAPA assigns this to an operator only when it is confirmed the operator will be receiving the aircraft. Lessors are increasingly ordering aircraft on a speculative basis, however.) 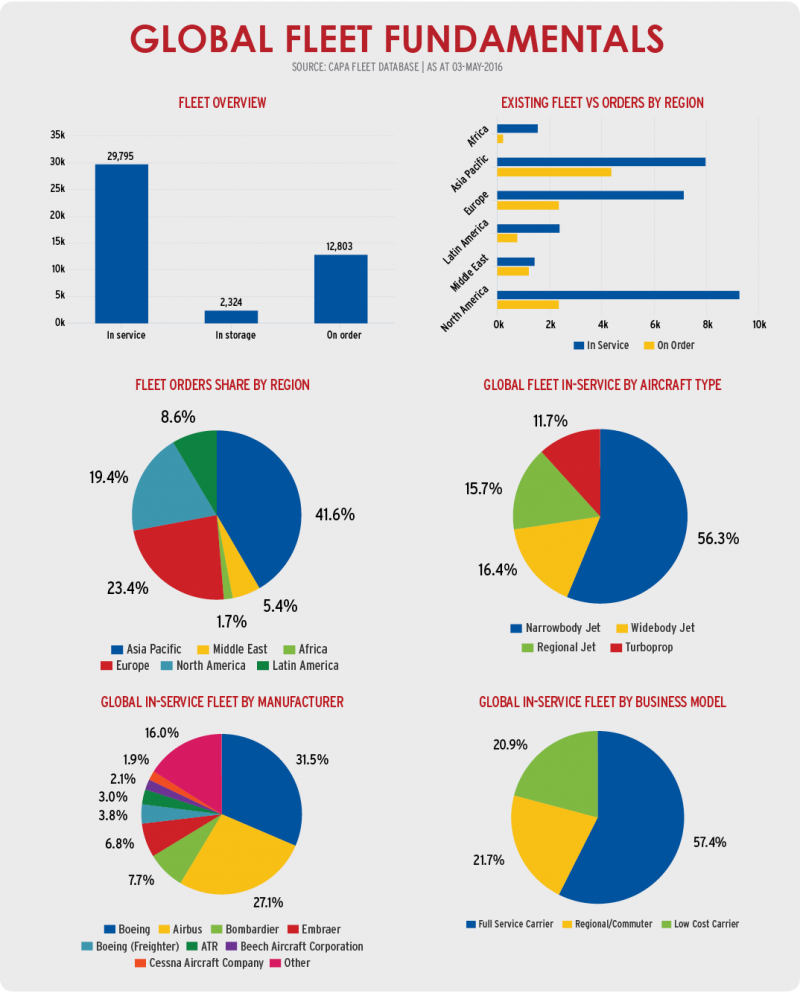 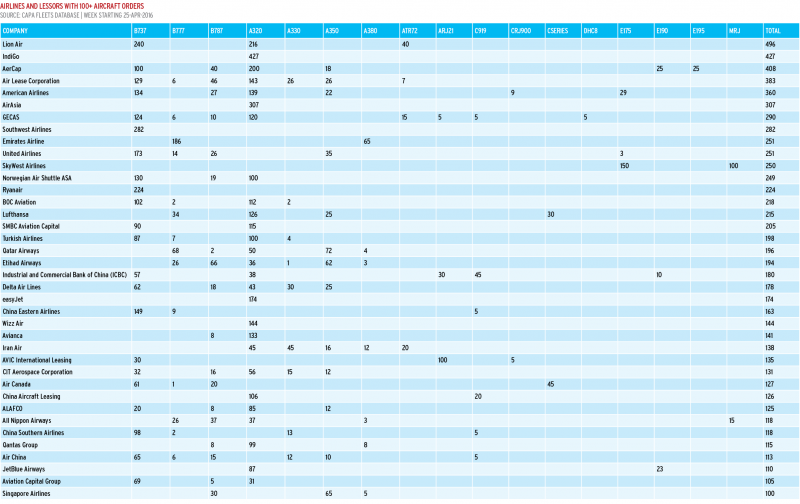 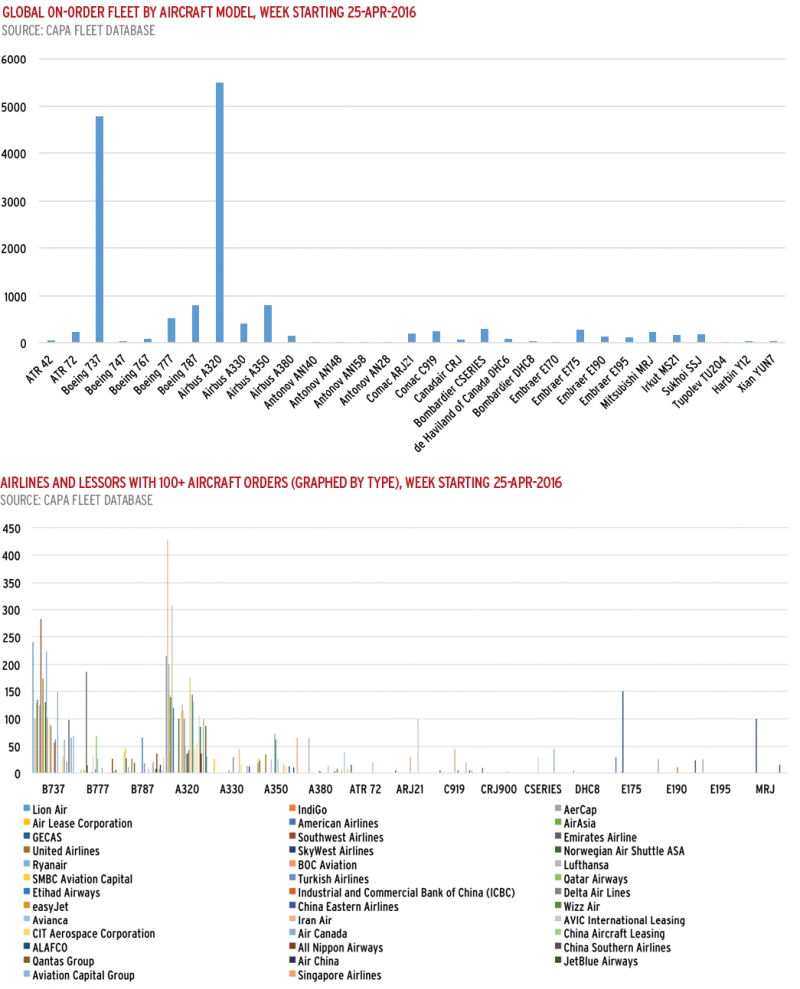