LCCs had a mixed day’s trading on Tuesday. While US LCCs closed lower, the picture across Europe and Asia was more varied. In key European LCC news, flybe, Europe’s largest regional airline, confirmed plans to go public by the year’s end.

Japan’s Skymark Airlines gained 6.6% yesterday to close the month at JPY955, its highest level this year. Skymark shares had a choppy month, in which the airline announced plans to acquire four A380 aircraft and move away from its low-cost domestic business and target the long-haul premium market. Shares in the LCC have more than doubled in the past four months.

Despite contagion fears and investor’s diminished appetite for risk in the region, Cimber Sterling (+2.9%) and Norwegian (+1.7%) were notable gainers in Europe. Vueling, based in the risky Iberian region, was another notable gainer, bucking the negative trend in Spain to gain 0.5%.

Most other LCCs in the region closed lower, on fears the EU may need to step in to relieve Portugal and Spain’s sovereign debt problems, which would slow already-anaemic economic growth and weaken demand for air travel. Air Berlin, which has large exposure to the Spanish market, dropped 3.2%.

flybe announced plans for an IPO to fund aircraft acquisition and support growth plans, which includes expanding codeshare arrangements, entering strategic agreements and potential acquisitions. flybe will seek to raise GBP60 million in listing on the London Stock Exchange in Dec-2010, which would value the airline at GBP240 million. 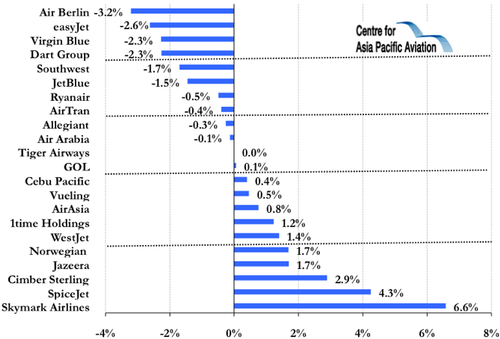