LCC stocks were mixed yesterday (23-Jun-09). Among the North American carriers, Allegiant, Southwest, WestJet, JetBlue and AirTran’s shares all slipped, in the range of -0.9% to -3.8%. Asia Pacific LCCs were also down, reflecting general weakness in Asia Pacific markets. 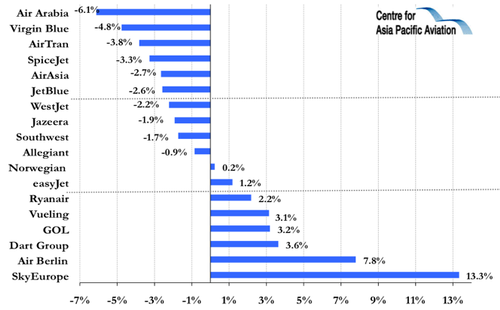 Elsewhere, in Europe, SkyEurope (+13.3%) regained some but not all of Monday’s 34.8% share price slump as it requested protection from creditors as it restructures. Air Berlin, Dart Group and Vueling also gained yesterday, by 7.8%, 3.6% and 3.1%, respectively.

Clickair CEO, Alex Cruz, on Monday stated the carrier’s branding would be scrapped in mid Jul-2009, following its merger with Vueling. The new carrier plans to focus initially on traffic originating in the Spanish market, although the airline would remain committed to maintaining its UK services.