LCC shares had a mixed day yesterday, with Cimber Sterling dropping another 3.7% after the sharp fall earlier in the week. The carrier revised its profit forecast a loss of DKK125 million-145 million for FY2010/2011, and reported a net loss of EUR15.8 million for its latest quarterly results.

airberlin reported a 14.8% year-on-year increase in revenue to EUR3720 million in a preliminary results release for the 12 months ended 31-Dec-2010, which was short of its expectations. The carrier also reported an operating loss of EUR9.3 million, compared to a profit of EUR28.5 million in the previous corresponding period, which saw net loss widened from EUR9.5 million to EUR97.2 million. Air Berlin is scheduled to release its full financial report for 2010 on 24-Mar-2011.

Shares in Virgin Blue fell 3%. The carrier raised fuel surcharges this week, increasing surcharges on international destinations by AUD20 per sector and AUD50 each way to the US. 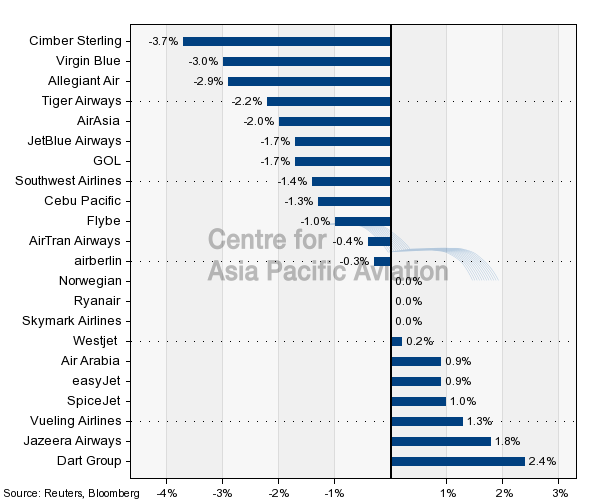