Before COVID-19, Iceland had been one of Europe's most dynamic markets, characterised until 2018 by strong growth.

The national airline Icelandair grew at double digit rates, with a North Atlantic connecting strategy via its Reykjavik hub. WOW air entered in 2012 with a similar approach at low cost and grew even more rapidly. The point-to-point market also attracted other European LCCs.

However, fierce competition weighed on both Icelandic operators, who fell into losses before WOW air's overexpansion led to its bankruptcy in Mar-2019. Icelandair started restructuring, but then the COVID crisis struck.

Iceland has now reached 71% of seat capacity for the equivalent week of 2019, similar to the Europe average of 73%, but only 50% of 2018 capacity levels (i.e. before WOW's exit). The new airline entrant PLAY aims to fill WOW's low cost role, but that will take time.

Icelandair has grown its seat share, of a smaller market, since before the crisis and also returned to profit in 3Q2021 – both rare achievements among Europe's legacy airlines.

As the coronavirus crisis recedes and the recovery builds, competition is also likely to grow in Iceland.

Total seat capacity to/from/within Iceland grew at a six-year compound average growth rate (CAGR) of 21% pa from 2012 to 2018. This was driven by strong growth from the national airline Icelandair Group, which grew at an average of 13% pa over this period but was turbocharged by WOW air.

In 2019 the Icelandic market contracted, with seat numbers dropping by 26% year-on-year as a result of WOW air's exit.

However, projections based on currently filed schedules indicate growth of 11% year-on-year in 2021 (but only to 42% of 2019 seat capacity).

Another new start Icelandic airline, PLAY, is projected to capture a seat share of 5.2%, while Icelandair Group's share is projected to slip back to 62.0% (in spite of low single digit growth in absolute terms).

*The values for this year are at least partly predictive from 08-Nov-2021 and may be subject to change.
Source: CAPA - Centre for Aviation, OAG

However, because of WOW air's collapse in Mar-2019 the Iceland market had already contracted significantly before the pandemic. Whereas total Europe capacity had been 97.6% of 2019 levels in the first week of Mar-2020 – just before the crisis had its full impact – Iceland capacity was then at only 78.5%.

For most of the period of the pandemic Iceland has been at lower percentages of 2018 seat capacity than has Europe as a whole. 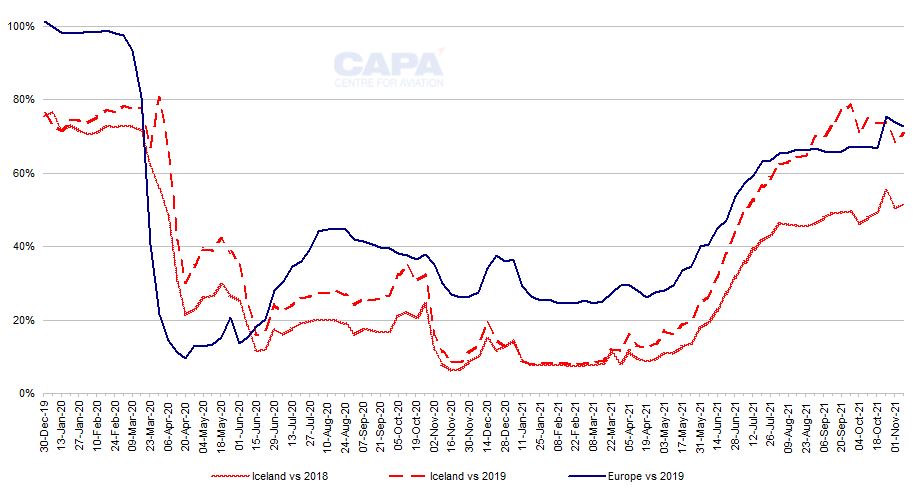 Europe is Iceland's most important market

The most important market for Iceland is Europe, which accounted for 66% of seats in 2018 (almost entirely on international routes).

Following WOW air's exit, Iceland-Europe's seat share increased to 74% in 2019. In 2020 it increased to 85% as intercontinental travel became highly restricted.

However, in absolute terms, 2021 capacity on Iceland-Europe is projected to be only 46% of 2019 seat numbers (although this is higher than the 42% projected for all Iceland capacity).

*The values for this year are at least partly predictive from 08-Nov-2021 and may be subject to change.
Source: CAPA - Centre for Aviation, OAG.

Icelandair held its Iceland-Europe seat share almost steady at 48% in 2020 and has further increased its share to c.57% in 2021, albeit a share of a much reduced market.

*The values for this year are at least partly predictive from 08-Nov-2021 and may be subject to change.
Source: CAPA - Centre for Aviation, OAG.

This led to a period of strong competition with Icelandair as both airlines used the Reykjavik hub to pursue connecting traffic between Europe and North America in addition to point-to-point markets between Iceland and its two nearest continents.

Weekly capacity from Iceland to North America grew almost threefold between Jul-2013 and Jul-2018, compared with a 58% increase in Iceland-Europe capacity over that period.

Based on analysis of data from OAG for the week of 30-Jul-2018, Icelandair and WOW air the two airlines overlapped on 19 routes in that summer, out of a total of 60 unique routes operated between them. Nine of the overlapping routes were to Europe and 10 were to North America.

The heat of competition pushed Icelandair Group into loss in 2018, the group reporting an operating margin of -3.8%, after three years of declining profitability. Its operating margin had been 11.9% in 2015, when Icelandair had been one of Europe's most profitable airlines.

It tried to buy WOW air in late 2018, but this fell through. When its rival then collapsed, the relief that Icelandair felt was short-lived, coming less than a year before the COVID-19 crisis.

The airline embarked on a restructuring programme and narrowed its operating loss margin to -2.6% in 2019.

However, the pandemic led to a collapse in traffic and revenues and a much heavier operating loss margin of -83.7%.

Icelandair returned to profit in 3Q2021

As is the case for all airlines, 2021 has continued to be a difficult year for Icelandair. However, it managed a positive operating profit in 3Q2021, with a margin of 3.2% – a better performance than many legacy airlines in Europe.

Icelandair has done well to emerge from the crisis with a higher seat share of Iceland-Europe and Iceland-North America than it had before, even if both markets have shrunk considerably.

The airline's return to profit in 3Q2021 is also creditable. However, as the crisis recedes it will face renewed competition from European LCCs and, to some extent, from the US majors.

WOW air demonstrated that there is a market for an Icelandic low cost airline, but its growth was too rapid, and it could not generate profits or securely fund its expansion.

The new airline entrant PLAY, with former WOW air executives as founders, says it has learnt from the defunct operator's experience and advocates a more cautious approach to growth.

It has established its presence quickly and is set to take a noticeable (6%) share of Iceland-Europe this year, after entering only in late Jun-2021.

PLAY also plans to operate Iceland-North America routes and is partly inspired by WOW air's connecting strategy. It has received initial approval to launch US routes in summer 2022, aiming at New York, Boston and Washington DC.

It currently operates three Airbus A320s and is planning to grow the fleet to between six and eight A320s/321s in 2Q2022, and more than 15 aircraft by 2025. This would actually be more than WOW air's 12 aircraft in its fifth year of operation, of which three were widebodies.

According to OAG, all five of PLAY's routes operated in the week of 8-Nov-2021 are also operated by Icelandair (Copenhagen, Berlin, Paris CDG, Tenerife Sur and London – although PLAY serves Stansted, whereas Icelandair flies to Heathrow).

As the crisis recedes, competition will grow in Iceland

Iceland is likely to continue to attract strong competition, and no doubt LCCs from outside Iceland will grow further as the post-COVID recovery gains momentum.

Wizz Air, easyJet, Transavia, Vueling, Jet2.com and Norwegian all operate to Iceland. They have lost some seat share in 2021 versus 2020, since Iceland's recovery is currently being led by its home-grown operators. However, the threat of foreign LCCs should not be ignored.

As COVID-19 becomes more and more part of normal life and aviation grows back towards pre-crisis traffic levels, the competitive challenge will resume more keenly. The next 12 to 24 months will be crucial for Iceland's two main airlines.