India’s Minister for Civil Aviation, Praful Patel, stated the Indian Government would help keep the ailing national carrier, Air India, operational and put it on the path to recovery, with a planned USD1.1 billion phased equity infusion into the carrier.

The large financial aid package would be paid out in phases, with the airline required to restructure the company, reduce costs by USD652 million p/a and improve revenues by USD435 million p/a over the next two years.

Mr Patel added that air traffic has shown an uptrend in the last month and is showing some signs of a recovery, "however there is still a long way to go".

Also in the Indian market, Jet Airways’ shares fell 6.4%, on reports in the Economic Times of India that the carrier is expected to raise as much as USD194 million from the sale of new shares in Nov-2009, as part of efforts to reduce debt levels.

The issue could reportedly dilute the equity of Naresh Goyal's Tailwind (the airline's promoter) by as 20-25%, depending on the pricing. The company may sell shares to institutional buyers at INR400/share, slightly lower than the current stock price.

In North Asia, Japan Airlines’ shares fell 3.8% yesterday, after news that the airline has asked its creditors for billions in financial aid as part of a restructuring plan, through a combination of debt waivers and debt-for-equity swaps and fresh loans and capital.

Asian markets were generally stronger yesterday (with the exception of Japan), with Hong Kong adding 1.95%, Singapore up 1.5%, Sydney gaining 1.14% and Seoul 1.24% stronger. Also up yesterday was crude prices, which rose above USD75/barrel for the first time in 2009, as US equity market surged and the US dollar continued to weaken, slumping to a 14-month low against the Euro. 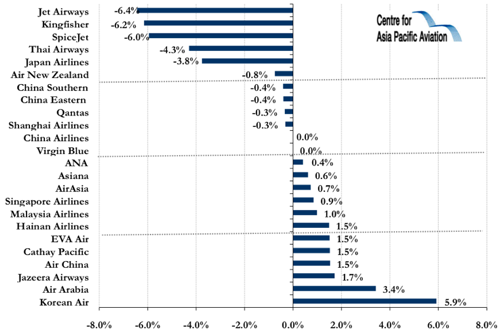