LAN and TAM up; Allegiant falls on downgrade

The majority of North and South American carriers again witnessed a rise in stock prices on Wednesday (23-Dec-2009), lifting the AMEX Airline Index up 1.5%. This was despite a 2.2% gain in oil prices, to USD76.40, its highest level in over three weeks, due to a US Government report indicating a larger than expected drop in US crude inventories.

The new aircraft will operate flights within Latin America, as well as domestic routes in Argentina, Peru, Ecuador and Chile and will be used for the renewal and growth of the company's short haul fleet. The order is valued at approximately USD2 billion, according to list prices. In addition to this purchase, LAN's strategic fleet renewal plan involves the sale of five Airbus A318 aircraft in 2011.

TAM up again after acquisition of Pantanal

TAM (+7.7%) meanwhile made the largest gain of the day, following its recent acquisition of Pantanal and announcement of plans to launch an IPO for its Multiplus frequent-flyer unit on the Sao Paulo Stock Exchange. The carrier's stock was also boosted by an increase in the Bovespa (+0.3%), as the Brazilian Real (BRL) made its biggest gain in three weeks due to strong investment flows into the country.

GOL (+3.7%) also made a strong gain on the back of news it has secured a USD150 million credit line, to finance aircraft acquisition prepayments covering aircraft scheduled for delivery in 2010.

Allegiant (-2.8%) made the biggest fall on Wednesday, as Jesup & Lamont downgraded the carrier’s stock rating to ‘Hold’ from ‘Buy’, as it had reached its price target. The analysts stated they could not see a short term catalyst for raising the price target. 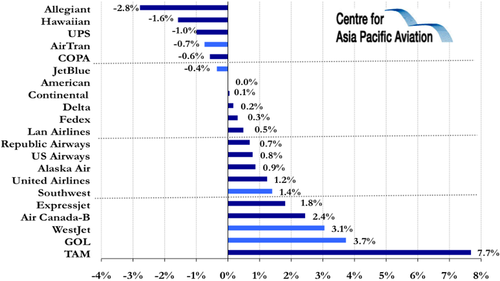