North and South American airline stocks ended their winning streak on Tuesday (27-Jul-2010), as markets slumped in afternoon trading. The Dow (+0.1%) still ended the session marginally higher, despite The Conference Board reporting a drop in US consumer confidence.

In Latin American markets, Chile’s IPSA (+0.3%) rose to a sixth consecutive all time high for the day. The rise was led by the retail and consumer sectors on expectations of a continuation in strong domestic demand. Brazil’s Bovespa (+0.4%) also gained, increasing for a seventh consecutive day, its longest winning streak this year. The market rose on expectations interest rate rises are to slow and bank lending is to increase.

LAN Airlines (-0.8%) slipped during the session, as it reported a 13.2% year-on-year increase in net profit for the three months ended 30-Jun-2010, to USD60.6 million, marked by a strong recovery in the cargo and passenger businesses. The result was similar to expectations from analysts surveyed by Bloomberg News, on average forecasting a quarterly profit of USD58.8 million.

LAN’s stock price had been steadily increasing over the past week before declining this week. 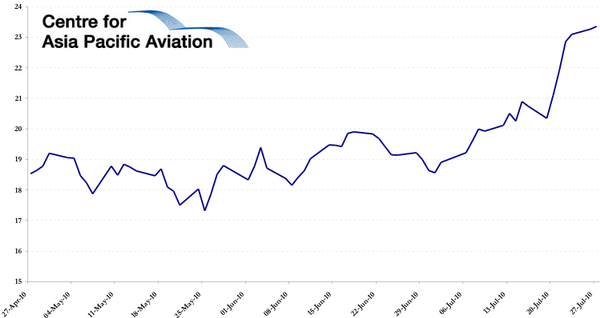 Elsewhere in the Americas, the European Commission announced it has cleared the proposed merger between United Airlines (-2.2%) and Continental Airlines (-1.7%) under European Union Merger Regulations. The carriers also announced their new executive team during trading. 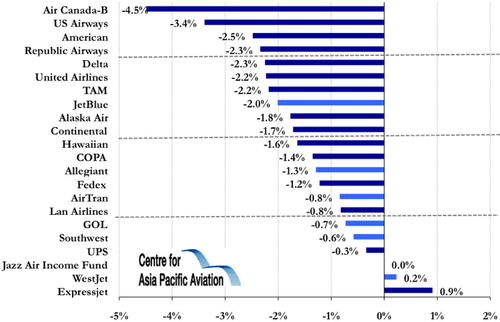