Established in 2005, Kuwait National Airways listed on the Kuwait Exchange at a 59% premium on Monday. The issue was oversubscribed 2.3 times and the price continues to rise as positive sentiment surrounds the operation.

Oil prices fell yet again as worries about shrinking global energy demand countered a US Federal Reserve interest rate cut and expectations OPEC will reduce supplies further. Oil prices fell USD0.60 (-2%) to USD43.91 a barrel. Oil ministers from OPEC are expected to announce plans cut output by 2 million barrels a day on 17-Dec-08, while Russia, the top non-OPEC producer, stated it could reduce exports by 320,000 barrels per day to balance oil markets and increase prices.

KNA (+6.1%), was established in 2005, the parent company of Wataniya Airways. It has been a long time coming to market, and has evolved from its original theme.

Wataniya is a departure in that it is a full service luxury airline. KNA also owns Royal Aviation Company, Kuwait, the manager of the new VIP terminal at Kuwait International Airport. Fully paid-up capital is KWD50 million - 30% is held by strategic investors, with the balance of 70% spread among small investors.

The carrier's first route, to commence in Jan-09, will be Kuwait-Dubai, using a "luxury Airbus A320 aircraft with the lowest seat density of any similar scheduled aircraft in the world". Passengers "will receive unparalleled choice for in-flight entertainment and special facilities, appealing to both leisure and business guests."

CEO is George Cooper, an experienced airline executive, who cut his teeth on British Airways.

In India, the stream of (nearly) good news is inspiring investors to reenter the airline market, as fuel prices and taxes fall and as consolidation talk reduces competition. Kingfisher (+5.8%) recovered well, followed by Jet Airways ((+4.9%) and Spicejet (+3.3%) continued its healthy improvement.

Most other Asia Pacific airlines moved upwards on the tide, with no particular news to influence their direction.

(Note: in early trading on the Sydney Exchange, Qantas was up 4.9% on news of a possible merger with Malaysia Airlines) 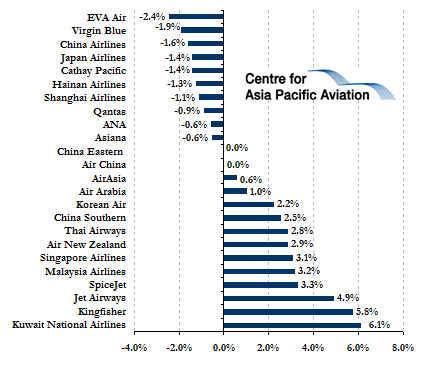