Kuala Lumpur International Airport's KLIA2 evolved considerably over the period between its conception and introduction in May-2014. Starting as a Low Cost Terminal designed to provide a larger and modernised version of KLIA's original LCC Terminal, at its opening it represented a uniquely hybridised model which may well become a vital link in the broader evolution of airport operations where LCCs and full service airlines each constitute a large part of the movements.

Today KLIA boldly anticipates providing a facility for connectivity on a level that many traditional hub airports do not achieve. For the moment only about 10% of passengers are engaging in a transfer at KLIA2 but unlike its predecessor it was built very much with the future in mind, and trends that are still evolving.

This is Part 2 of a report on the development and unique nature of KLIA2.

In Oct-2013 KLIA completed construction of its third runway, specifically as a part of the KLIA2 project, followed by the supporting infrastructure two months later. The runway measures 3960m by 60m and is capable of handling any current aircraft fully loaded. Malaysia is the first country in the region to have a third runway for its flagship airport.

Despite further slippages in the terminal construction schedule it opened with ICAO and FAA approval on 02-May-2014 following a safety evaluation that found only small cracks on the apron parking and taxiway. The original LCT closed on 09-May-2014.

There were some subsequent infrastructure issues and at the time of writing they have not been eradicated. The most significant is the appearance of depression pits – or ‘sinkholes’ - at KLIA2’s airfield. IPC (Ikram Premier Consulting), which previously had determined that the new terminal met ICAO and FAA standards, has been reappointed along with ICAO to investigate the event. 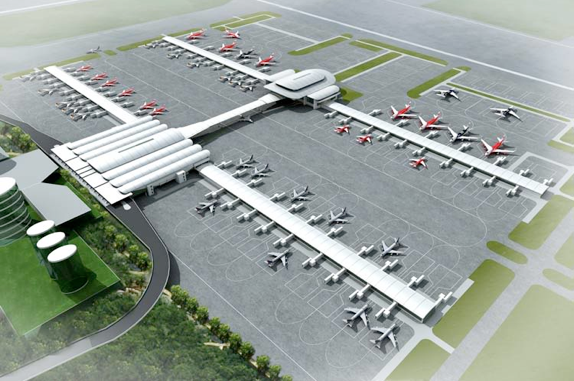 The terminal is accessible via six highways and has its own dedicated spur access road. 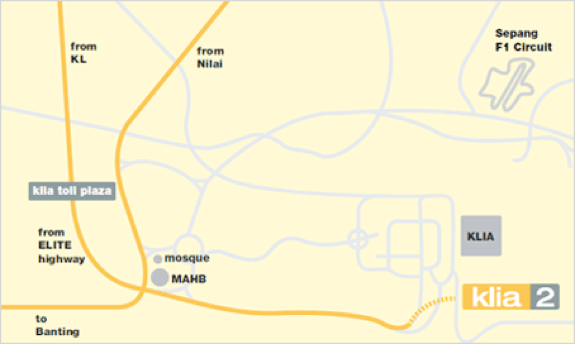 The final KLIA2 specification is as follows:

KLIA2 is undeniably a project has spiralled to deliver ultimately the largest facility for low-cost airlines (even if it can host others) in the world and one that can cater for more than twice the number currently handled by London Stansted airport. At the time of writing all the airlines using it are LCCs and they are AirAsia (Domestic and International); AirAsia X; AirAsia Zest; Indonesia AirAsia; Thai AirAsia; Lion Air; Cebu Pacific; Tigerair; Malindo Air.

The six airlines that were operating at the original LCT in 2009 when the decision to build KLIA2 was taken are italicised above. (Tigerair then as Tiger Airways).

In terms of overall seat capacity at KLIA in May-2014 (see third chart below), AirAsia and Malaysia Airlines (MAS) are running virtually neck and neck with about one third of that capacity each. MAS continues to use the main terminal. 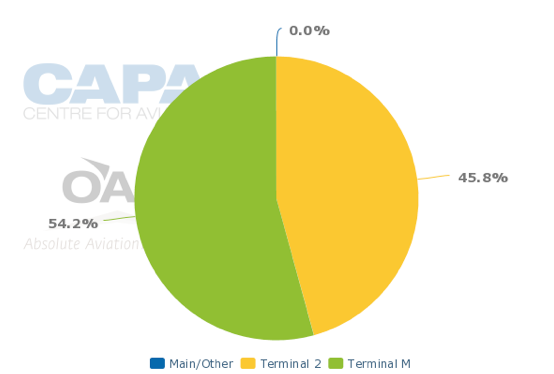 Source: CAPA - Centre for Aviation and OAG
Note. In this chart:
Terminal M = the original non-LCC terminal, being both the main and the satellite as it refers to the check-in/arrival area
Terminal 2 = the designation for the new LCCT being KLIA2
Main/other – (0%) reflects the cargo only services that require no passenger check-in 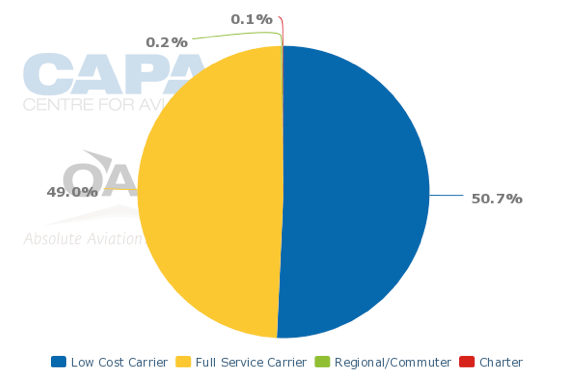 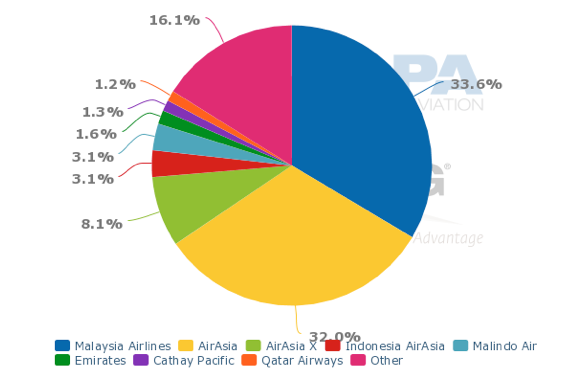 There was mounting criticism during the latter part of the construction project for KLIA2, directed both at its cost and at its scale. There is no other contemporary structure in the world that is directly comparable, certainly not in Bangkok, Hong Kong or Manila, and it was conceived and built during the period when a misfiring budget terminal at Singapore was identified for closure.

It is interesting to note the way in which AirAsia’s Tony Fernandes, who not so long ago was totally opposed even to moving to KLIA from Subang, has embraced the new terminal and its comparatively luxurious outfitting. Indeed, Mr Fernandes lobbied hard for a premium lounge and influenced the airport's decision to extend and widen its runway to accommodate larger aircraft. 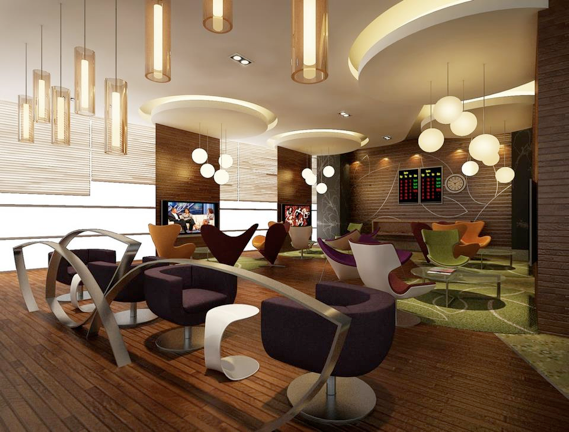 In an online briefing he is reported to have said that MAHB complied with almost everything requested by AirAsia for it to operate from KLIA2 - except for a spa and a museum. Furthermore, he acknowledged that the LCC is set to be “the biggest gainer” by operating from the new airport and is expected to contribute about 80% of the new terminal’s traffic.

Perhaps this is because the visionary in Mr Fernandes acknowledges the growing drift worldwide of LCCs towards hybridity, by which they more consistently respond to the needs of business travellers. Or perhaps because he has been able to envisage the potential for long-haul to long-haul and long-haul to short-haul connectivity within the LCC domain, a pattern that remains at a nascent level globally just yet. He will be aware that Australia’s Jetstar had one-stop long-haul expansion plans to Europe that would require the establishment of an Asian hub.

AirAsia X is once again talking about recommencing European long-haul budget flights once it has the aircraft to operate them profitably and is happy to embrace the concept of self-connection at the airports it uses. (When it operated to London Stansted airport several years ago it was reported that up to 30% of its passengers then took on onward flight on another airline on a separate ticket, if not always on the same day). Further afield, Norwegian Air Shuttle has grand plans for long-haul low-cost from London Gatwick, Madrid and other airports and is ruffling feathers in the United States, while Ryanair’s Michael O’Leary continues to drop hints that his own intentions for long-haul operations have not diminished.

There are certainly factors in place at KLIA2 to aid the concept of such connectivity. Although all operators momentarily are LCCs there is nothing to stop any carrier operating there, such as a full service unaligned carrier to cooperate with one or more local LCCs and the physical size of the building, which is bigger than the main terminal by some margin, would further facilitate such activity.

In a recent interview with CAPA, the general manager for special projects at MAHB, Mr K Veelayudan Nair, pointed out that while the former KLIA LCT was built as a dedicated temporary terminal for low-cost operations it was only a temporary solution as the AirAsia operations began to cause congestion at the main terminal and was hindering its growth. The KLIA LCT had many weaknesses to be overcome with the new KLIA2.

Thus KLIA2 was primarily built for the use of low-cost carriers but also is suitable and open for other airlines, not exclusively for LCCs. This was decided as early as at the time of the ground breaking ceremony.

In fact, according to Mr Nair, MAHB believes that there is no such thing as a low-cost terminal meant only for low-cost carriers. In fact, the question to ask is "what is the definition of a low cost terminal?"

He enlarges on this position by saying that an airport has to meet safety and security requirements and this cannot be compromised. How can these requirements be less for the terminal that caters for low-cost airlines? If at all, the only compromise could be on the level of comfort that is accorded to passengers. How low could an operator go on these levels?

Could the terminal go without air conditioning in a hot-humid environment such as in Malaysia? Can the operator get away with providing no seating? As an airport operator MAHB would not want its passengers to sit on the floor.

He adds: “We can dispense with aerobridges but it has other implications such as security and safety issues due to movements on the airside that need proper control. For short haul flights compulsory aerobridge usage can cause some extra time for turnaround which may prevent maximum utilisation of aircraft.

"In fact we realised that airlines preferred aerobridges in a wet environment like Malaysia. In the past we have seen many flights have continuously been delayed due to rain! The consequential effect on schedules even due to a 15 minute morning rain shower can be very serious. Ultimately, we have given options to airlines to use or not to use aerobridges”.

So apart from its size, and cost, KLIA2 seems to be indicative of the direction ‘low cost terminals’ are going to take in the future: designed primarily for LCC use but not exclusively so, with comfort features not previously considered essential in this type of edifice, and mindful of the changing mores of the ‘low cost’ business globally as it seeks to attract more business travellers and even changes its attitude towards aerobridges and their propensity to slow what was hitherto considered the sacrosanct business feature of the rapid turnaround.

On the subject of the transfer facilities, Mr Nair confirms that they were designed mainly by MAHB but with inputs from airlines. MAHB assumed in the design that about 50% passengers would be transfers though, interestingly, the airlines wanted an even higher percentage than that to be catered for.

For the moment only about 10% of passengers are engaging in a transfer at KLIA2 but unlike its predecessor it was built very much with the future, and trends that are still evolving, in mind. By way of comparison, the percentage of transfer passengers at London Heathrow Airport, the world’s busiest international airport, was 37% in 2013, some way short of the MAHB target, let alone that of AirAsia and other airlines. At London Stansted, which is referred to in this report, it is around 10% (but there is little or no airline encouragement for the activity there, indicating that a sufficiently wide network of routes alone may generate a certain level of connecting traffic). At Singapore Changi Airport, which has now dispensed with its LCT, the ratio was 30% in 2013.

It would appear that 50% is a tough target to achieve. If MAHB achieves it at KLIA2 it will indeed signal another sea change in the way airlines are managed where airports can help them facilitate such a change. There are some known examples where airports have gone out of their way to facilitate self-connection between budget airlines, Cologne-Bonn airport in Germany, where self service transfer facilities were introduced, being a prime example. Further changes in airline operating procedures may demand that more airports rise to the challenge.

Parts of this report were paraphrased from the Low Cost Airports & Terminals Report, published by CAPA in 2009. The report is available for download at https://centreforaviation.com/reports/