Air New Zealand reported smaller yield reductions in Feb-2010, although international yields continued to be battered, down 15.4% in the month. (This was off growth of 21.4% in Feb-2009 - the peak of the cycle for Air NZ - thanks to exchange rates at the time). International yields are down 13.3% in the year-to-date period (eight months to Feb-2010).

Short-haul yield contractions were much less severe, down 3.2% in the month for the smallest yield reduction since Mar-2010. This compared to a year-to-date decline of 8.1% and follows growth of 1.4% in Feb-2009. 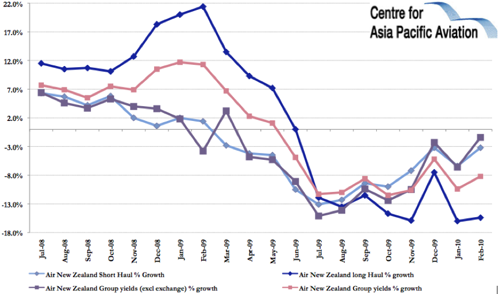 Air NZ will "transform" its short-haul Tasman and Pacific Island services later this year, "setting a new benchmark in terms of competitive pricing, choice and the airport experience" and introducing a range of product developments. The carrier will be cutting the price of its lead-in fares to be more competitive with LCCs on the route, while standardising the A320 Tasman Pacific fleet to one-class (ie dropping Business Class) with 171 seats.

Shares in the carrier remained stable following the traffic release yesterday, but are down 0.8% in early morning trading today.

China Eastern Airlines rose 2.4% in Hong Kong trading and 3.3% in Shanghai, to its highest level since Aug-2008. The carrier’s President, Ma Xulun, was quoted by Bloomberg yesterday stating the carrier would receive more than 30 aircraft in 2010 to support its ongoing expansion plans.

Shares in Hainan Airlines were also stronger yesterday, up 3.1% 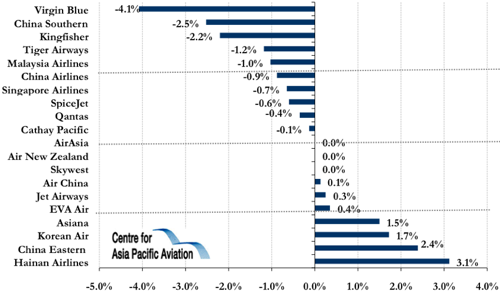