Jeju Air will become the first South Korean LCC with a business class seat in early Jul-2019 when it puts into service retrofitted 737-800s with 12 recliner seats in 2x2 configuration. The new product will debut on Jeju’s new Busan-Singapore service and will be available on a limited number of other medium haul routes from Busan.

Jeju Air also recently became the first South Korean LCC to open a lounge: the ‘JJ Lounge’ opened in Apr-2019 at Seoul Incheon Terminal 1 and can only be accessed by Jeju Air passengers – on a pay for entry basis.

South Korea’s first and largest LCC has always followed somewhat of a hybrid model. The opening of a lounge and introduction of a business class product, albeit on a trial basis, represents a further shift in Jeju’s strategy.

Jeju Air currently operates an all 737-800NG fleet consisting of 44 aircraft. All the aircraft are in all-economy configuration with 189 seats.

There are currently 149 aircraft in service operated by South Korean LCCs, according to the CAPA Fleet Database. All are in all-economy configuration, although Jin Air’s four 777-200s (the only widebody LCC aircraft in South Korea) have 48 extra-legroom seats at the front, using the same economy seat as the rest of the aircraft.

Jeju Air has the largest fleet among South Korea’s six LCCs, accounting for 30% of the total fleet.

South Korea LCC fleet by airline: as of Jun-2019

As CAPA has highlighted in recent analysis reports, Korea’s LCC sector is growing rapidly as most of the existing competitors pursue rapid fleet expansion and three new start-ups prepare to launch services.

In an unusual move for a narrowbody LCC, Jeju Air has decided to retrofit at least two of its 44 737-800s. The first two retrofits, which involve the removal of 27 economy seats with the new resultant total of 174 seats (12 business and 162 economy), are being done in Singapore. The first aircraft is expected to enter service on 4-Jul-2019 on the new Busan-Singapore route.

Busan-Singapore, which has a flying time of approximately six hours, will be Jeju’s longest route. With its all-economy 737-800 there would be payload restrictions, which contributed to the decision to go with a new two class configuration, as it reduces weight at the same time as (hopefully) improving yield.

Singapore Airlines' regional full service competitor SilkAir competes on the Busan-Singapore route with 737-800s but does not have any restrictions as it has a 162-seat two class configuration. SilkAir launched the route on 1-May and operates four weekly frequencies.

Jeju will also initially offer four frequencies when it launches the route on 4-Jul-2019. Jeju has been offering basic fares (excludes bags, food and seat assignments) on Singapore-Busan from USD210 return, including taxes.

SilkAir fares start at around USD600 return including taxes for economy class and around USD1700 for business class. Given their much lower fares the allure for Jeju is strong.

It makes sense for Jeju to try to sell a premium product rather than accepting payload limitations, so the decision to invest in new seats and incur retrofit costs, including aircraft downtime, may be a worthwhile toe in the water.

Jeju could alternatively have opted to block middle seats, providing a European style short haul business class service. This would give it flexibility to sell all 186 seats on other (shorter) routes and easily drop the business class product entirely should there be limited demand. However European style business class has traditionally not done well in the Asian market and given the long length of the Busan-Singapore route there would likely be pushback from consumers.

Jeju Air has not historically carried a significant number of corporate or business passengers. The next step for the airline would be to focus on building relationships with TMCs and offering corporate passengers perks such as blocked middle seats and bundles that include lounge access, food and bags.

As a limited measure, it does provide some differentiation from Korea's other LCCs, at the same time attracting attention to the brand.

Jeju Air views the launch of a business class on a 737-800 sub-fleet as a modest experiment to test demand. If the experiment does not succeed, Jeju could quickly switch back to all-economy aircraft without having to adjust its network plan or seating configuration.

Jeju Air will have the ability to deploy all-economy aircraft on Busan-Singapore and other similar length South Korea-Southeast Asia routes from 2022, when it expects to receive its first batch of 737 MAX 8s. Unlike the 737-800, the 737 MAX 8 has the range to operate Busan-Singapore in a high density economy configuration without any payload limitations.

If the business class project is successful, the airline could include a business class cabin on its future fleet of 737 MAX 8s. In 2018 Jeju Air placed an order for 40 737 MAX 8s and has the option of switching to larger 737 MAX variants.

Jeju Air is keen to follow the JetBlue Mint model

The airline has been evaluating the 737 MAX 10, which its current executive team believes could be an ideal aircraft for a two class configuration because of its larger size. A lie-flat seat is even possible for the 737 MAX 10, given that Jeju is keen to adapt the JetBlue Mint model.

The current Jeju Air executive team, which took over in late 2017, has been studying JetBlue closely and is keen to follow that model.

So far, Jeju has only committed to retrofitting two 737-800s, although a third aircraft has been allocated for potential retrofit.

The initial fleet of two or three two class 737-800s will all be based in South Korea’s second largest city Busan and will be used on medium haul routes to Southeast Asia and the South Pacific. After Singapore, Jeju Air is planning to deploy the two class aircraft from Busan to Guam and Saipan. Both of these routes are approximately four hours.

While offering business class on its longer routes makes sense from a product perspective, the decision to base the two class aircraft at Busan is somewhat questionable. Seoul is generally a stronger market for business and upmarket leisure demand.

However, the relatively lack of competition in Busan could make it an attractive market to trial a business class product. SilkAir is one of only five full service airlines outside North Asia serving Busan, which does not have any long haul services.

Jeju Air’s only lounge is at Incheon

Jeju Air now has a lounge at Incheon which it could offer as part of its business class product if it opted to introduce business class on selected Seoul routes.

The lounge at Incheon’s Terminal 1 opened in Apr-2019 on a pay for use model. Jeju Air passengers can access the lounge for KRW25,000 (USD21) or at a promotional of KRW14,900 (USD13) if they pre-purchase a lounge pass on the Jeju’s website. Passes are not available for passengers flying on other airlines.

Jeju Air does not have a lounge in Busan, which is its second largest international hub after Incheon. It would make sense for it to also open a lounge at Busan to help support the new business class product in the Busan market.

Jeju Air also has nine international routes from the secondary city Muan (MWX), which accounts for 8% of the airline’s total international seat capacity. 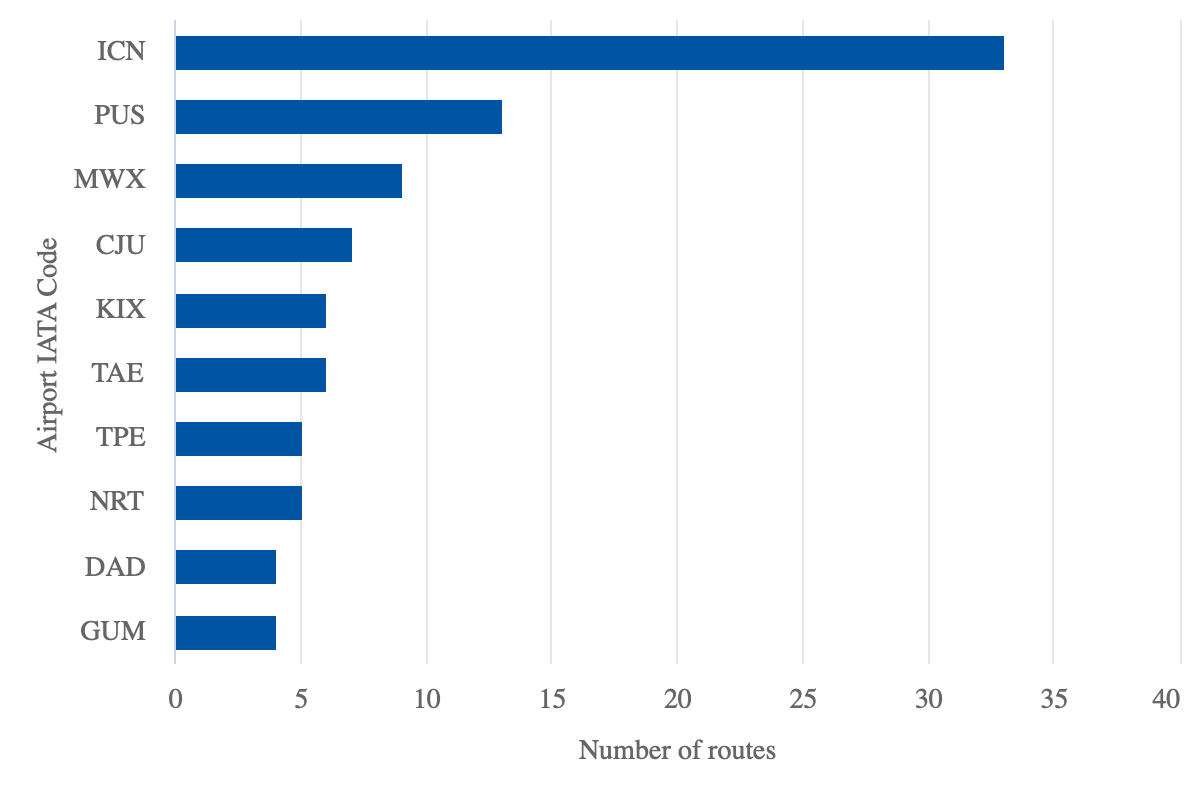 Demand is not sufficient to consider a business class product for the domestic market. It is also difficult to justify two class aircraft for the short haul international market – which includes Japan, China and Taiwan.

While South Korea-China flights can be as long as four hours (depending on the region of China), they are dominated by inbound price sensitive traffic. Flights to eastern China, including the main business markets of Beijing and Shanghai, are only two hours.

Only approximately 35% of Jeju Air’s flights are more than three hours, and less than 10% are above five hours. 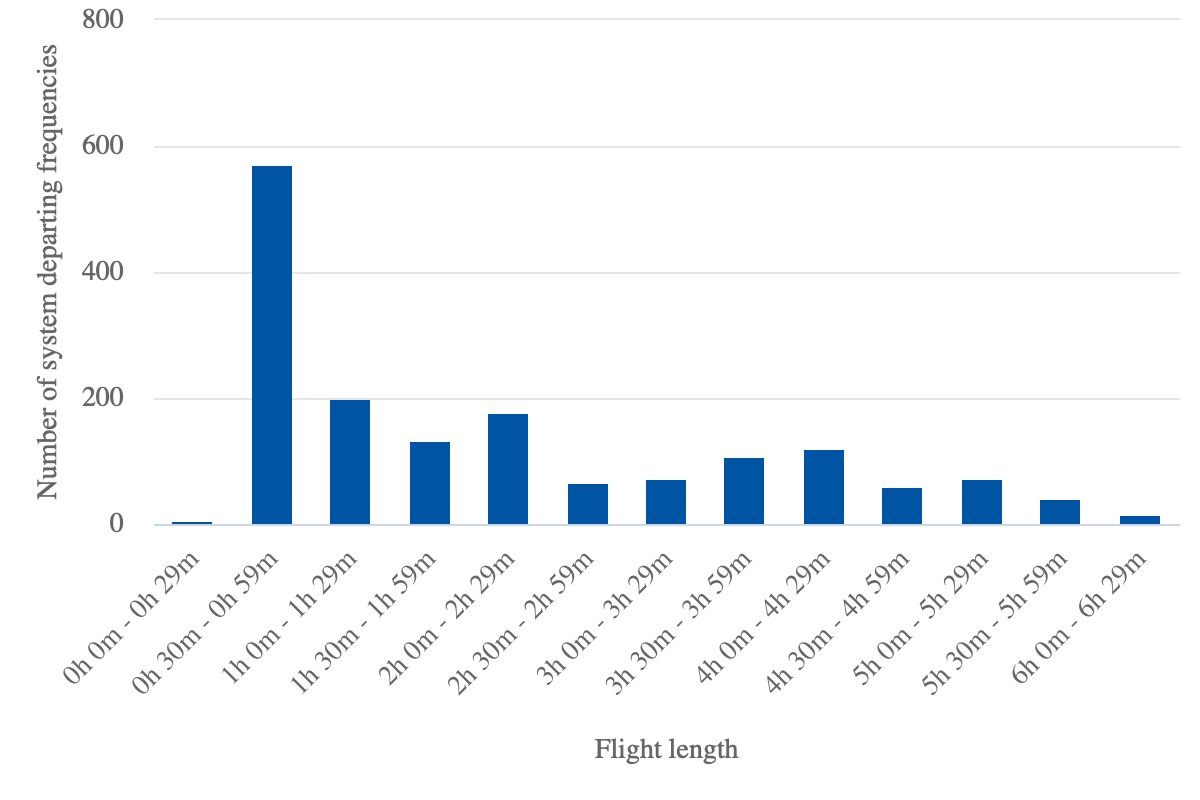 All the flights of at least five hours are to/from Southeast Asia flights. Jeju’s Southwest Pacific flights (Guam and Saipan) are approximately four hours, and its only destination classified as Europe is Vladivostok in Far East Russia, a flight of approximately three hours.

Jeju Air currently has 11 destinations in Southeast Asia, consisting of: four in Vietnam, three in the Philippines, two in Thailand, one in Malaysia and one in Laos. Singapore will therefore become its 12th destination and sixth country in Southeast Asia.

Southeast Asia accounts for 26% of Jeju’s international seat capacity and 45% of its ASKs. 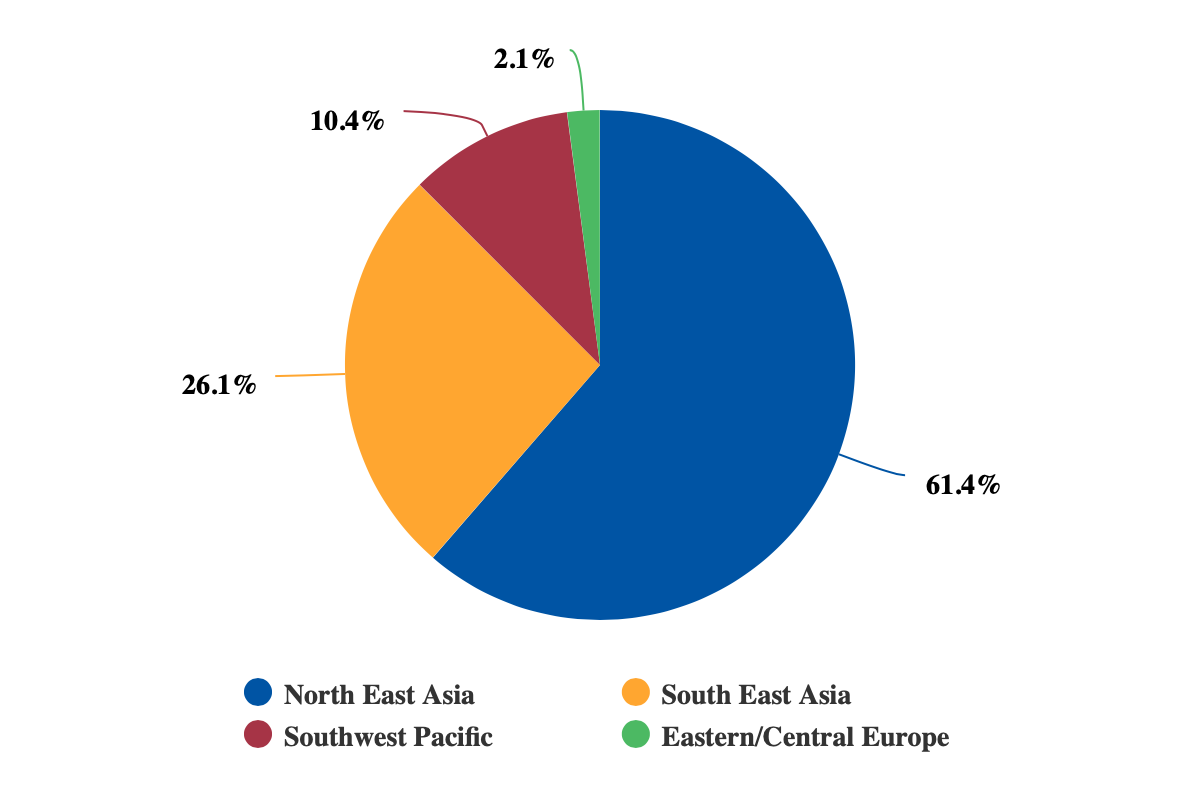 While all of Jeju’s Southeast Asia flights have a scheduled block time of at least four hours, most of these routes consist almost entirely of outbound leisure traffic. Jeju Air will be better off focusing on increasing density on most these routes as it introduces 737 MAX family aircraft, rather than using a lower density two class configuration.

This is also true for most of the new routes Jeju Air is considering launching as it uses the improved range of the 737 MAX to go deeper into Southeast Asia (for example Indonesia and Myanmar).

For a handful of Southeast Asian destinations there may be enough business class demand to justify a two class product. However, it is questionable whether there are enough routes to justify a sub-fleet.

However, to succeed Jeju Air will have to make sure that its new business class product is deployed on the right routes, and it will have to work hard at developing relationships with corporates.