Korean Air is in the spotlight as it hosts the 2019 IATA AGM for the first time. The airline’s main shareholder, the Cho family, has been embroiled in multiple scandals in recent years and its patriarch, Cho Yang-ho, was facing embezzlement charges when he passed away in Apr-2019. This year’s AGM provides an opportunity to remember Mr Cho and also marks the start of a new chapter for Korean Air.

Cho Won-tae, a.k.a. Walter Cho, has taken over as Korean Air’s chairman and CEO. He also has been appointed co-CEO of Hanjin Group. Hanjin is a large conglomerate that includes Korean Air and Hanjin Travel, one of South Korea’s largest travel agencies. Hanjin and the Cho family hold a 33% stake in publicly listed Korean Air.

The younger Mr Cho, 43, was already Korean Air’s president and a board member. He has been the heir apparent for some time, having worked his way up Korean Air’s management ranks, including stints managing the passenger and cargo divisions before taking over as president in Mar-2016. Mr Cho also became chairman of the SkyTeam Alliance on 1-Jun-2019.

Below are Walter Cho’s statements from a round table discussion with selected media, including CAPA, that took place in Oct-2018 during the AAPA Assembly of Presidents in Jeju. Mr Cho’s replies provide a glimpse into his strategy and plans for South Korea’s largest airline group.

Walter Cho: “Low cost has become a very big competitor to us. However, we are in a different segment. We do not intend to directly compete with them in prices. We have much better services and a different point of view in customer service. We have six low cost carriers in Korea and it’s growing at an extremely fast pace. And they are taking market share in Korea and in other countries in Asia as well.”

“We formed our own low cost carrier about 10 years ago and they are doing extremely well, outperforming Korean Air dollar for dollar because it’s a very lucrative market. It acts as a barrier between Korean Air and other low cost carriers.” 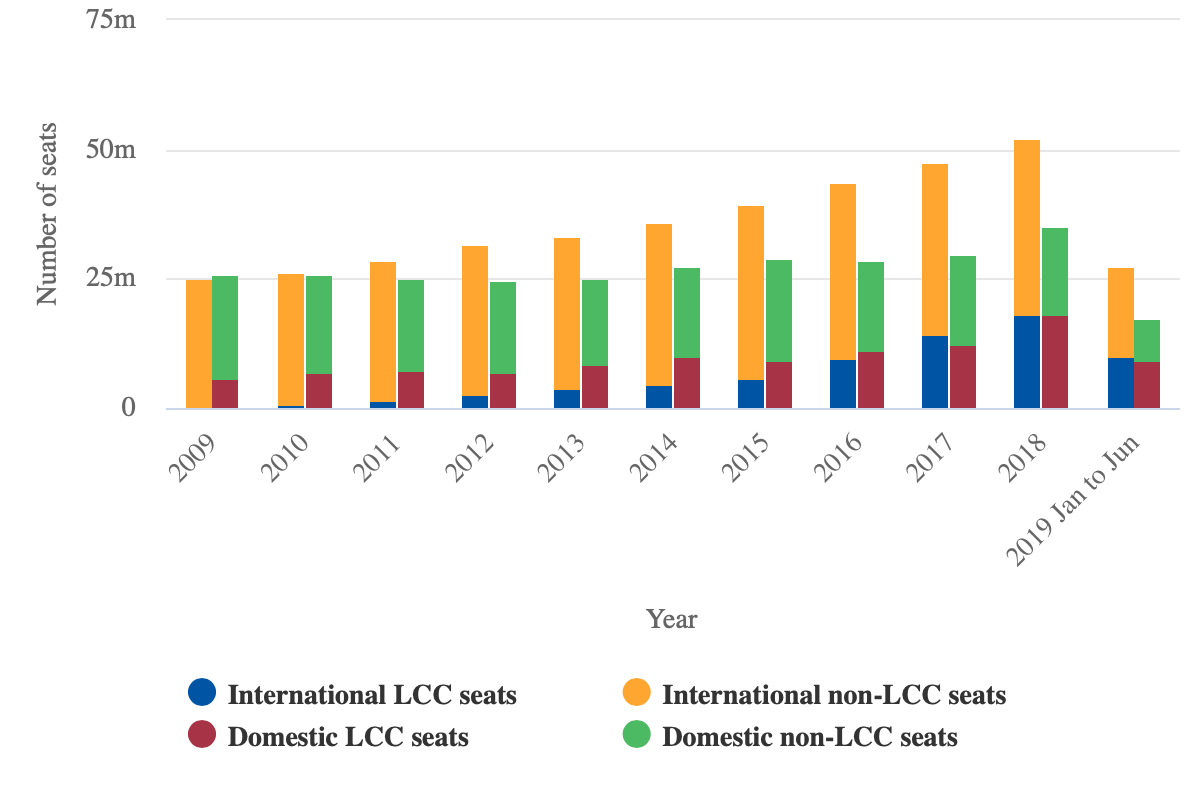 Walter Cho: “Jin Air is looking into expanding the long hauls. They are already flying Hawaii and we could expand that to some European cities or the US where the traffic rights are not constrained.”

“They have been asking for more [777-200s) and it is a possibility we will utilise Jin Air to compete in that market.”

Walter Cho: “We have a lot of need for widebodies. We are looking at all the options. Since we already have a 787 fleet there is a very high possibility we would expand our fleet on the 787. The 777-X is coming up and would be a good replacement for our current 777.”

“Our market has grown especially in trans pacific into the US and Canada. It is growing significantly and we are seeing needs for larger aircraft intra-Asia as well.”

“We have too many fleet types. Consolidating to one large order would help us reduce maintenance type and training as well.”

“I’m very pleased with our current (widebody} fleet – both Airbus and Boeing. But they are starting to show their age so we have to do replacement.”

Korean Air widebody passenger fleet summary: as of 27-May-2019

“It hasn’t been used to start new routes but has replaced 737-800s from smaller cities in South Korea which were too big. It has actually shown a lot of benefits.”

The 737 MAX 8s and A321neos are intended mainly as replacements for 737-800s but some aircraft are earmarked for new routes and some will replace widebody aircraft that are now used on regional routes due to a shortage of narrowbodies. Korean Air’s first 737 MAX 8 had been slated to be delivered in 2Q2019 but has been delayed due to the global grounding of the 737 MAX.

Korean Air narrowbody passenger fleet summary: as of 27-May-2019

Walter Cho: “From the joint venture we have been seeing so many benefits. Their marketing power in US and our marketing power in the Korea and Asian market. Joining together creates so much force. Actually, it has been a lot greater than what I was expecting.”

“We are looking possibly at other airlines to do other joint ventures and also stronger partnerships through SkyTeam.”

“I would like to do a joint venture in China but right now joint ventures it is not possible because we don’t have open skies with them so we are looking at other possibilities in Asia."

“I’m looking at everything in Europe and Asia. The only problem is open skies. We don’t have open skies with Europe and we don’t have open skies with lots of countries in Asia. But we see a lot of opportunities. It doesn’t have to be as tight of a joint venture as we have with Delta. It could be a very loose relationship but still we can tie ourselves in very close. A loose joint venture but a close relationship.”

Walter Cho: “We believe customer service starts with a product and it always starts with economy. We always advertise our great products in first and business class but what really matters for the mass generally is the economy class service. It’s not the taste of the food and it’s not the smile of the flight attendants but it’s the seat that is the most critical. We need to keep that bearable for 14 hours of flight. I’m a very tall guy and if I cannot fit in the seat we don’t put it in. If I can fit and my knees don’t pass the front seat then it passes.”

CAPA: Korean Air has 34in pitch in economy across its long haul fleet, providing more legroom in economy than virtually any other airline.

“We already have the lowest seat number on our A380. If we do put in premium economy it will go further down and that will impact our profitability even further. I’m not too optimistic how to do that.”

Of the top eight airlines in the trans Pacific market, Korean is the only without a premium economy cabin.

CAPA: Korean Air currently has a first class cabin in addition to business class on all of its widebody passenger aircraft. It is one of only a few airlines to configure 787s with first class.

Korean’s plans for expanding its international network and operation

Walter Cho: “We have over 80 destinations internationally but we have many destinations we don’t serve with daily flights. My first goal is to make all of them daily before we expand too much.”

“We started Croatia (in 2017) and we started Barcelona (in 2018). They have been very successful. The Korea market is growing in terms of leisure travels to areas that were non-existent 20 years ago, 10 years ago even - like Central Europe, Eastern Europe and the Scandinavian countries. Koreans travel all over the world now and now they are looking at places we didn’t really have any focus on before.”

“There is a lot of opportunities for us to expand. But as a business traveler myself I’d like to have all my destinations be daily flights first because it’s critical for business travel to have at least one flight per day direct back to home.”

Korean’s plans for further US expansion

Walter Cho: “I want to make daily flights two daily, five times a week to a daily flight. I want to expand our frequency rather than go to new markets.”

CAPA: Boston was launched in Apr-2019, becoming Korean’s 11th passenger destination in the US and 13th in North America (excludes the US territories in the Pacific such as Guam).

Korean is already the largest Asian airline in the US market.

Korean’s plans for its aerospace and maintenance division

Walter Cho: “We will maintain our own MRO facility for our own fleet. We will try to expand on the building of parts for Boeing and Airbus. The MRO is a very good part of the industry and I believe it’s critical for us to maintain that skill to be able to maintain our own aircraft even if it’s heavy maintenance.”

“We are very space constrained (and therefore are unable to pursue third party work). We do not have enough space and time to do our own.”

CAPA: KAL performs heavy maintenance on several aircraft types and KAL Aerospace also produces aircraft parts for major manufacturers – commercial as well as military and general aviation (helicopters). While most airlines have aircraft maintenance divisions, Korean Air is the only airline with an aircraft-component manufacturing business.

Walter Cho: “The airspace over China causes us many, many delays for our flights to Europe. This is a very serious concern to us and all the airlines coming into Asia.”

“Incheon is starting to see a lot of constraints as well. It’s not like we can build another runway and we can solve it. It is airspace that is very limited over Korea which is constraining our usage of the airport.”

CAPA: Incheon opened Terminal 2, the new home for Korean Air and SkyTeam partners in 2018. Incheon is planning to extend Terminal 2 and complete a fourth runway by 2023.

Although these projects will increase the airport’s capacity airspace, it is clearly an issue that will need to be resolved. Incheon’s current capacity is 72 million passengers per year, which the airport is expected to reach in 2019. 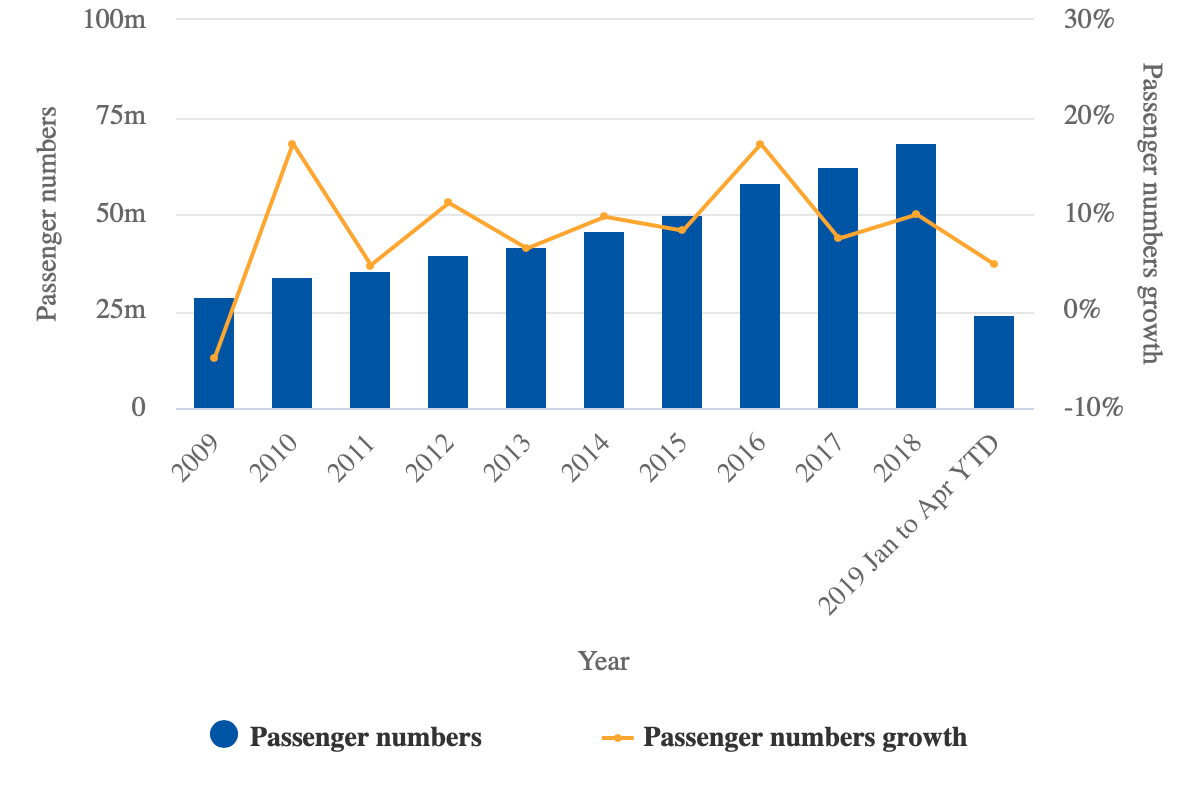 Korean is the largest airline at Incheon by a wide margin. Korean and Jin combined currently account for a 31% share of seat capacity at Incheon. Rival airline group Asiana, which includes the LCC subsidiary Air Seoul, accounts for only a 20% share. 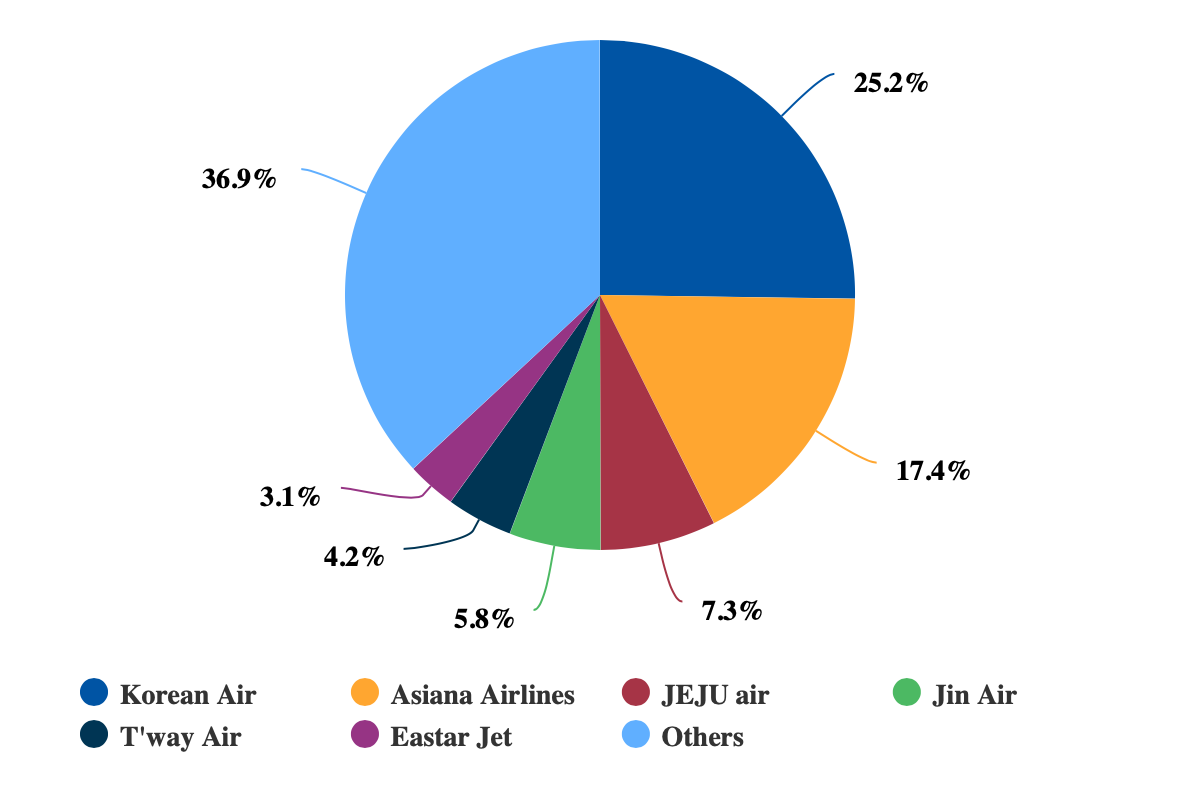