India’s airlines are clawing their way out of the financial abyss of the past 18 months thanks to rising demand. They are increasingly turning their attention to international markets in search for sustained profitability.

Kingfisher Airlines has announced the launch of three new international routes, from New Delhi to Kathmandu and from New Delhi and Mumbai to Dubai with A320 equipment. The new services, which commenced on 24-Apr-2010, increase the airline’s international network to eight destinations including London, Bangkok and Hong Kong. (The carrier launched services from Mumbai and Delhi to Bangkok on 17-Apr-2010). Kingfisher, a future oneworld member, operates daily from London Heathrow to New Delhi and Mumbai, with onward connections to international destinations and 61 cities in India, served by Kingfisher and its low cost unit, Kingfisher Red.

Jet Airways is taking a more cautious approach to its international network, having been badly burned during the global financial crisis. Selective route launches include daily Mumbai-Johannesburg service introduced on 14-Apr-2010 - the carrier's first African destination and 23rd in its international network. CEO, Nikos Kardassis, stated the carrier is now considering other destinations in the continent, with Nigeria currently a key focus. Mr Kardassis added that 55% of total revenues now are derived from international operations.

SpiceJet gears up for international launch

SpiceJet is also seeking a piece of the international action, as it completes the mandatory five years of domestic operations next month before qualifying to operate internationally. CCO, Samyukth Sridharan, recently confirmed SpiceJet plans to launch services from Kolkata to Dhaka, Colombo and Kathmandu by Jun-2010 with B737-800 equipment.

SpiceJet investor, Bhupendra Kansagra (12.98%), who owns equity in the carrier through Royal Holding Services Ltd, has meanwhile denied reports of plans to sell his stake in the carrier, stating “I have stayed invested for a decade now, I am not selling”, according to a Reuters report. SpiceJet reportedly stated up to six financial groups have submitted proposals or "term sheets" to invest in the carrier. The carrier is seeking to raise up to USD75 million ahead of the launch of international operations, while Mr Kansagra and another SpiceJet investor, Wilbur Ross (32.0%), were reported to be considering plans to exit the carrier.

Elsewhere in India, IndiGo parent, InterGlobe Aviation Pvt Ltd, stated last week that while it has no immediate plans to launch an initial public offering (IPO), the company has “some banks working” on a proposal to raise up to USD450 million. President, Aditya Ghosh, told the Times of India that “no decision has been made yet”. IndiGo will complete its five years of domestic services on 04-Aug-2011. 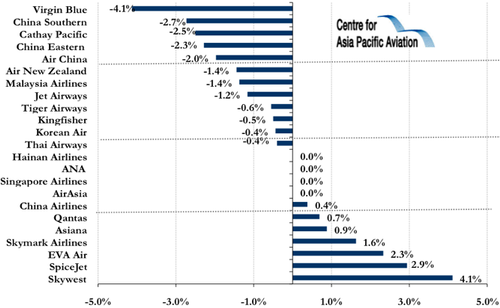