Kingfisher Airlines was the best stock of the day, jumping 8.8% after the carrier signed a codeshare agreement with British Airways, and British Airways CEO, Willie Walsh, commented its future oneworld member partner was “clearly the best partner” in India.

Mr Walsh, who stated the carrier has a list of 12 potential takeover takeover targets, added that if the Indian Government amends its Foreign Direct Investment (FDI) legislation “all airlines around the world will look at the possibility to invest in Indian carriers”, adding, “I have no doubt Indian carriers would welcome such foreign investment because airlines are looking at strengthening their financial position.”

Meanwhile, Davy Stockbrokers commented: "I would say Asia is number one in the [BA] context that it's a high-growth market. India is very important for them and I suspect Kingfisher is top of the list."

Meanwhile, KSEMA Fincon recommended Kingfisher Airlines as a good stock to buy in the upcoming six months, while SMC Global Securities commented that Kingfisher “can be a good stock to look for” at a target price of INR78, commenting: "Kingfisher is in the backdrop of their debt restructuring … Once the debt is removed and the restructuring efforts are successful then the  company's efficiency levels and their profitability levels will significantly go up and because of this debt levels, even the stock has remained under pressure for quite some time and going forward, there can be a good strong relief rally in the stock."

Also gaining strongly was Jet Airways (+5.6%), while on the other end of the spectrum, Tiger Airways’ shares declined 2.0%.

Thai Transport Ministry has summoned Thai Airways to explain its agreement with Tiger Airways to jointly launch LCC, Thai Tiger Airways. The carrier will answer questions from the Ministry on 15-Sep-2010, with the Ministry claiming the carrier is yet to clarify some of its issues of concern. Transport Minister, Sohpon Zarum, has insisted Thai provide full details of the JV and has stated that if the agreement is found not useful or lawful, it would be halted.

In other Asia Pacific LCC news, AirAsia CEO, Tony Fernandes, commented that the group plans to float AirAsia X as he is seeing “a bit of contamination” between the way AirAsia and AirAsia X are operated.

The carrier will list in Malaysia and possibly in London or New York. The CEO declined to disclose how much of the business will be sold to outside investors, but stated AirAsia's 16% stake in AirAsia X would be “treated as an investment” and sold down gradually. However, the two airlines will not be fully separated and will continue to share a website. Four executives, including Mr Fernandes, will remain on a board for both carriers. Shares in AirAsia gained 1.1% yesterday. 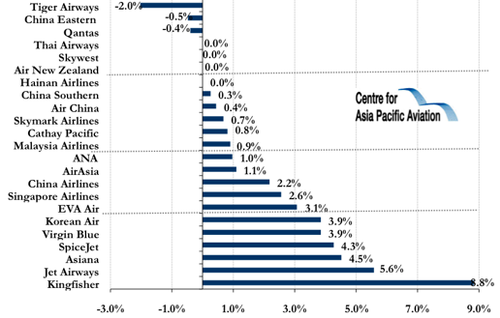