Indian airline stocks declined last week as the Government intervened to curtail airlines from charging high fares for last-minute bookings. India’s Directorate-General of Civil Aviation (DGCA) has reportedly issued new directives to Indian carriers requiring them to lower certain fees from their website that the DGCA deemed exorbitant and has asked carriers to explain why certain fares were higher than others.

Also in the region, shares in Pakistan International Airlines surged 7.6% on Friday. 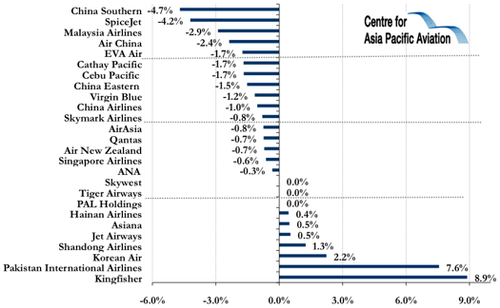 On the other end of the spectrum, shares in China Southern lost 4.7% on Friday. The carrier has announced plans to launch Guangzhou-Melbourne-Auckland service on or before 30-Apr-2011.

Shares in Cebu Pacific declined 1.7% on Friday while shares in parent JG Summit Holdings lost 2.7%, the steepest decline this month. The company stated its board approved a plan to raise funds by selling up to 2.09 billion shares.