The GDR sale and domestic offering are expected to be completed in the next three to four months.

At the same time, United Breweries Holdings, the parent of the carrier, also announced its intention to convert USD140 million in loans to Kingfisher into Preference Share Capital. Kingfisher Airlines reportedly has a USD1.3 billion debt burden, the majority of which is long-term debt. Kingfisher Airlines has recently requested lenders to extend the repayment period and lower interest rates

Another major Indian carrier, Jet Airways, recently announced plans to raise USD400 million in funds through an institutional placement, as a measure to offset its debts. The carrier also reportedly plans to sell the rights to a Mumbai property for USD120 million, in a cash and debt swap arrangement. Jet Airways borrowings are reportedly as high as USD3.1 billion.

Air India is set to receive a USD257 million equity infusion from the government this fiscal year. A decision on the equity boost was expected yesterday. The carrier is also seeking to refinance USD1.2 billion of debt used for the purchase of Airbus aircraft, and is in talks with the Indian Reserve Bank over soft loans.

In mid-Aug-2010, the Indian Civil Aviation Secretary raised concerns with the Finance Ministry over the level of debt held by Indian carriers and related financial stress. Airlines in the country are estimated to have between USD10.5 billion and USD12.9 billion in debts, approximately two-thirds of which is attributable to the state-owned Air India. Carriers will also need to raise USD10 billion in financing over the next three years to fund aircraft deliveries.

Indian Banks have expressed concerns that the three largest carriers in the country will be unable to repay their debts while they suffer continued losses. Indian carriers reported combined losses of USD2 billion in 2009, and a similar level of red ink in 2008. 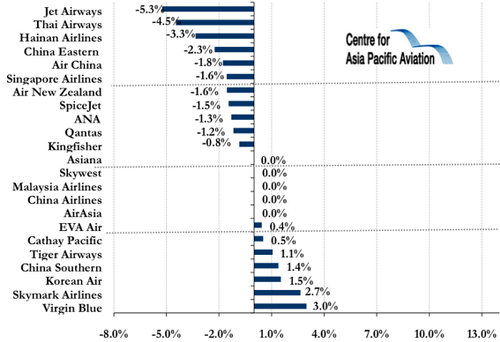