Shares in Kingfisher and SpiceJet soared 5.2% and 4.0% respectively yesterday, shrugging off a 68-point fall in the Bombay Sensex Index, which was dragged lower by profit taking. Gains were made by consumer durables stocks, while banking stocks were lower. Jet Airways gained 0.6%.

United Breweries (Holdings) stated yesterday that its members have approved the conversion of loans given by the company to Kingfisher Airlines into equity shares.

Elsewhere, Japan’s Skymark Airlines gave up most of yesterday’s gainsm while AirAsia dropped 1.4%. 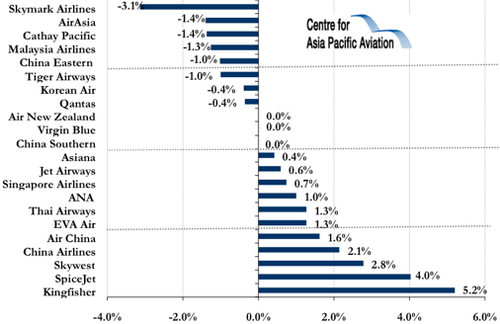