Kenya Airways has shocked the market with a significantly worse than expected KES7.9 billion (USD92 million) loss after tax for the year ending 31-Mar-2013 (FY2013). The loss follows a FY2012 net profit of KES1.6 billion (USD18 million) and was driven by the effects of the European economic downturn and geopolitical uncertainty surrounding a number of general elections in Africa, which caused a significant drop in demand.

Kenya Airways is Africa’s fourth largest carrier and among the few consistently profitable airlines on the continent, but it issued a profit warning in Nov-2012 for FY2013, flagging its half year loss would be followed by modest full year profits which would be less than 25% of the FY2012 profit.

While the second half of the financial year was stronger, as expected, it became clear that the revised target would not be achieved when Kenya Airways reported flat demand numbers for 4QFY2013 and the KES5.53billion (USD65 million) losses in the first half would not be recovered.

Kenya Airways is pursuing an aggressive and ambitious 10-year growth plan which revolves around building its Nairobi hub as an African gateway for traffic to and from Asia, particularly China as well as India. It includes a target of flying to every African capital city by 2014.

Although African markets in general have remained buoyant, traffic to Kenya was impacted by travel advisories issued in key European source markets in response to uncertainty and concerns of potential violence associated with the general election in Kenya in Mar-2013 and fears of retaliatory attacks from the Al-Shabbab terror group.

As a result Kenya Airways cut capacity to Europe by 22% in a bid to minimise losses while operations to Muscat, Jeddah and N’Djamena were suspended. 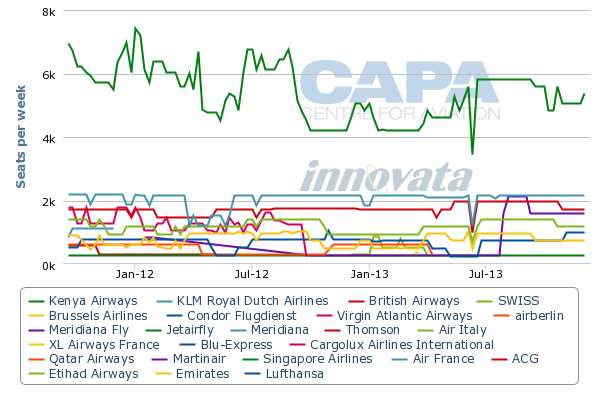 Nevertheless, Kenya Airways expanded services to Delhi and Kilimanjaro during the first half of the year, and recommenced services to Eldoret in Oct-2012 shortly before Jet Link Express pulled off the route.

Group revenue of KES98.9 billion (USD1.1 billion) was down from KES107.9 billion (USD1.3 billion) in FY2012, largely attributed to reduced demand placing yields under considerable pressure, leading to the carrier sliding into the red. 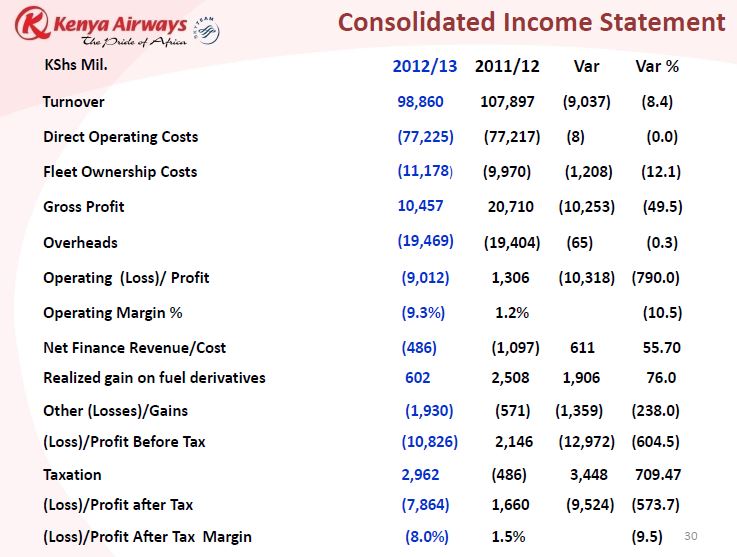 Capacity measured as ASK was flat at 13.937 billion compared to prior year. At the same time RPKs declined by 3.6% to 9.579 billion, driven by a drop from European markets. This, combined with “unprecedented competitive pressures” drove yields down an average of 1.3% across the network.

The combination of reduced demand, lower yields and a stronger Kenyan shilling led to passenger revenues declining to KES85.1 billion (USD995 million) from KES95.2 billion (USD1.113 billion) in FY2012. The shilling strengthened against the US dollar with the average exchange rate for the year closing on KES85.02 per US dollar against an average of KES88.58 per US dollar the prior year.

High fuel costs continue to weigh on Kenya Airways' financial performance, accounting for 38.5% of total operating costs, slightly higher than in the prior year. Despite this operating costs were held steady at KES77.2 billion (USD903 million).

The carrier is considering establishing its own fuel procurement company to reduce fuel costs which totalled KES41.3 billion (USD482 million) in FY2013 by eliminating intermediaries in its fuel supply chain.

As expected 2HFY2013, while still loss making, was considerably stronger than the first half of the year with losses pulled back by KES1.9 billion (USD22 million).

Kenya Airways has taken the necessary steps to address the issues that led to the first half losses, including restructuring its network to reduce exposure to unprofitable routes and focusing on Africa and eastbound intercontinental destinations. The carrier also reduced overheads including the size of the carrier’s headcount by shedding 578 jobs in Sep-2012 to reduce its wage bill that had doubled from KES6 billion (USD70 million) in 2007 to KES13.4 billion (USD157 million) in 2011.

Kenya Airways FY2013 first half and second half summary 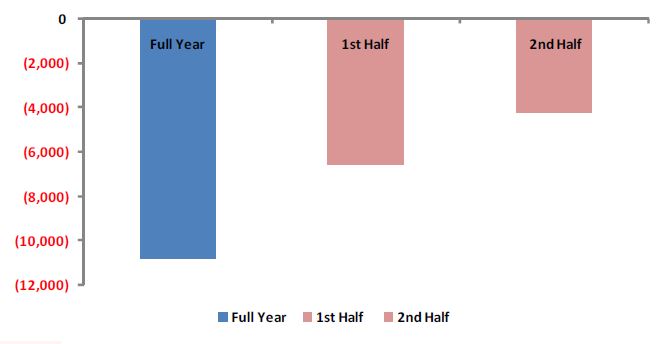 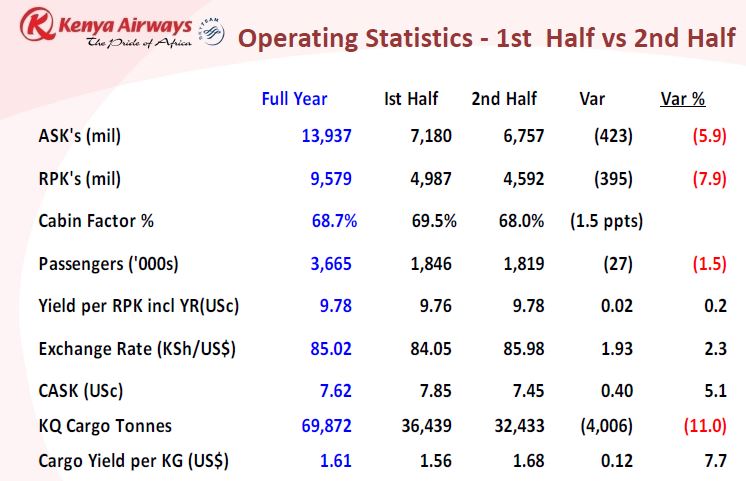 The carrier’s CFO reportedly estimated the net asset value of Kenya Airways to be KES0.30 (USD000.35) a share suggesting the stock is trading at a 67% discount. 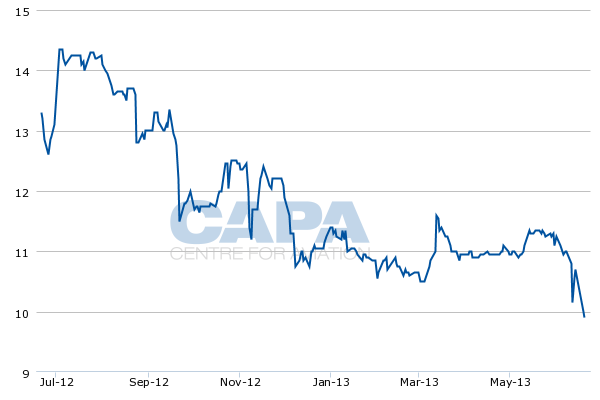 Despite the challenges of the past year Kenya Airways has been able to grow its African and Asian operations. The carrier has added capacity through a mix of increased frequencies or up-gauging of aircraft in response to higher demand which resulted in traffic growth in the Middle East, Asia, Far East and Africa regions. 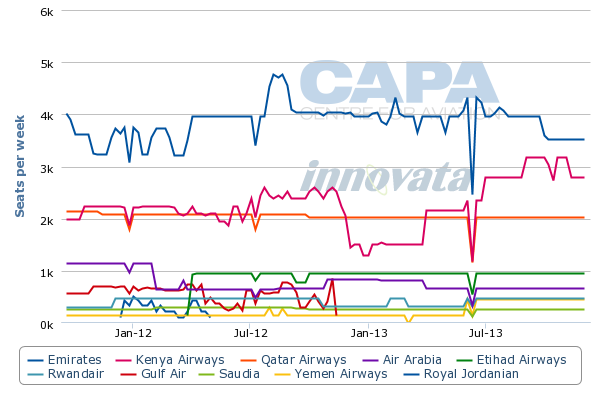 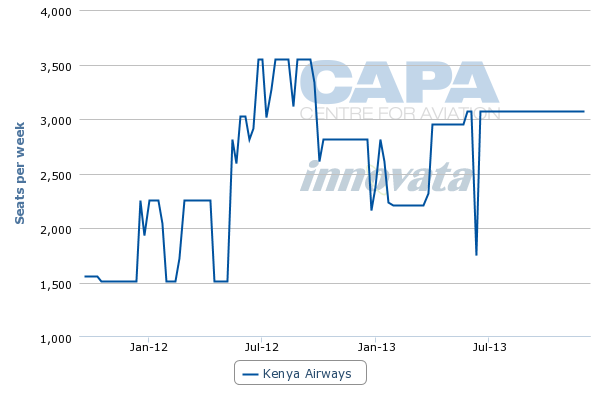 Within Africa frequencies were added to Juba as well as to Dakar via Abidjan while capacity was added to Kinshasa through the use of more widebody aircraft.

The strength of Kenya Airways’ focus markets of Africa, Asia and Pacific in FY2013 helped provide some protection from the effects of the on-going economic woes in Europe, where the carrier was forced to reduce capacity in response to lower demand and minimise losses in Kenya Airways’ largest intercontinental market. 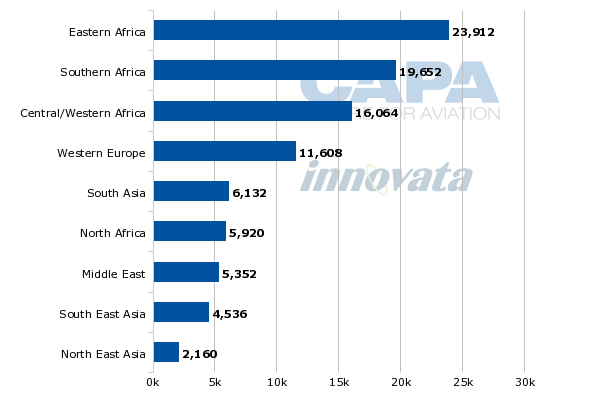 Mr Naikuni said Kenya Airways would continue to concentrate on Sub Saharan growth to leverage the region’s strong GDP which continues to outpace the rest of the world.

Kenya Airways’ total cargo tonnage grew by 17.8% in FY2013 following the introduction of Boeing 747 freighter operations between China and Nigeria as well as increased belly capacity offered by additional widebody services. The additional capacity, however, led to lower prices and as a result yields slipping 2.6%.

Greater demand for air freight capacity on the carrier’s regional routes has prompted Kenya Airways to launch a programme to convert its four owned 737-300s into freighters with the first of these delivered in Apr-2013. The aircraft has been deployed on African routes to supplement the limited cargo capacity available on its Embraer regional jets.

Kenya Airways plans to operate a fleet of 12 freighters by 2022 and is reportedly considering acquiring a Boeing 777F aircraft as part of its plans to double its cargo revenues over the next three to four years.

Kenya economic growth forecast raised to 5.7% for FY2013 by the World Bank

The World Banks bases its higher forecast on lower interest rates and higher investment supporting Kenya’s economic growth for the next two years and is considerably higher than the 4.7% growth achieved in 2012. Contributing factors are the country’s stable macroeconomic environment and the peaceful elections in Mar-2013 and a smooth transition of political power. The bank forecasts GDP to improve further to 6% in 2014.

But the bank also warns that Kenya’s economy continues to perform below its potential and remains vulnerable to external shocks. The government must create an environment that encourages private sector-led growth by continuing to invest in infrastructure, removing bottlenecks to doing business and sustaining sound monetary and fiscal policies if Kenya is to achieve a target growth rate of 10% by 2030.

India is becoming an increasingly important market for Kenya Airways with the country becoming Kenya’s largest trading partner in Asia in 2012, with exports of USD240 million easily surpassing exports to China worth USD148 million, according to Kenya's National Economic Survey 2013. Exports to India have grown about 30% since 2011.

A number of large Indian companies already have a presence in Nairobi including Tata, Essar, Reliance Industries and Airtel. Nairobi is an attractive hub, providing access to 37 onward regional destinations throughout Africa. Kenya also has a large diaspora in India, estimated at 100,000 people.

India also represents a fast growing tourism market for Kenya, accounting for about 60,000 of the one million tourists in 2011, up from 47,000 in 2010, spurred by increased direct flights between Nairobi and Delhi and Mumbai by Kenya Airways as well as access offered by the Gulf carriers via the UAE.

India reportedly also has a growing interest in investing in Kenyan industries including communications, petroleum refining, floriculture and medical diagnostics.

But Air India could struggle to compete in the Kenya-India market given the strength of Kenya Airways and its new partner Etihad Airways. Etihad plans to expand its Indian network to over 20 destinations as part of its new partnership with and investment in India's Jet Airways. With Etihad also partnered with Kenya Airways, a large portion of passengers travelling between India and Kenya or other parts of East Africa that are not going to the major metros of Delhi or Mumbai will be routed via Abu Dhabi.

With costs being brought under control and the arrival of more fuel efficient 787s from 2014, together with a focus on Asian and African growth markets, Kenya Airways is well placed to take advantage of Africa’s strong economic growth prospects. It has an evolving partnership structure, most recently with an Etihad codeshare agreement, which will help. But like any small carrier in a fast changing world, uncertainty dominates strategy formulation.

And risks remain, particularly externally, from political uncertainty, which could impact on tourism, especially from the lucrative European markets. There is a wider need for the new government to make a concerted effort to make Kenya a more attractive and competitive place for foreign investors to do business.