Africa's airline industry may not be large, but there is no shortage of activity as growing interest in the region's natural resources piques global attention.

Now Etihad Airways, which has consistently pursued an active alliance strategy, has concluded a reciprocal code share agreement with Kenya Airways, giving access to each others' networks and paving the way for greater collaboration and cost savings.

Kenya Airways will launch a new three-times weekly Nairobi-Abu Dhabi service from about Jul-2013 to improve connections in support of Etihad’s current daily service. The alliance is the latest from Etihad to cut across marketing alliance boundaries: Kenya Airways is a member of SkyTeam, complete with a 27% equity investment from KLM. Etihad and SkyTeam leaders, Air France-KLM concluded a "strategic alliance" in Oct-2012.

The strategic commercial partnership will significantly expand Etihad’s reach across strategically important Africa while also providing Kenya Airways with greater access to the important Asian and European markets. It will also boost Nairobi’s challenge to Addis Ababa as the gateway to eastern Africa.

Details of the destinations included in the deal have not been disclosed. Both carriers already operate to Cairo, Khartoum and Lagos, but Etihad also serves Tripoli and Casablanca which do not appear on Kenya Airways’ route map.

Etihad is likely to be interested in taking advantage of Kenya Airways’ extensive access across the sub-Saharan region, including Abidjan and Accra in the west, Johannesburg in South Africa and Dar Es Salaam in the east, all of which are served by United Arab Emirates rival Emirates, as well as Qatar Airways.

For Kenya Airways, the alliance could enhance its Indian services to Mumbai and Delhi; Etihad operates to nine points in India. Kenya has a reduced but still substantial expatriate Indian community dating back to the 19th century. The UAE flag carrier is currently in discussions to acquire a large minority stake in India's Jet Airways, which would further strengthen the value of such a link.

It could also bolster Kenya Airways’ Asian network which is limited to Hong Kong, Guangzhou and Bangkok using its own metal. Etihad could add to that Beijing, Shanghai and Chengdu in China, Seoul in South Korea, Manila in the Philippines as well as Kuala Lumpur, Singapore and Jakarta. Tourism traffic could also be available from Australia, where Etihad is in alliance with Virgin Australia. 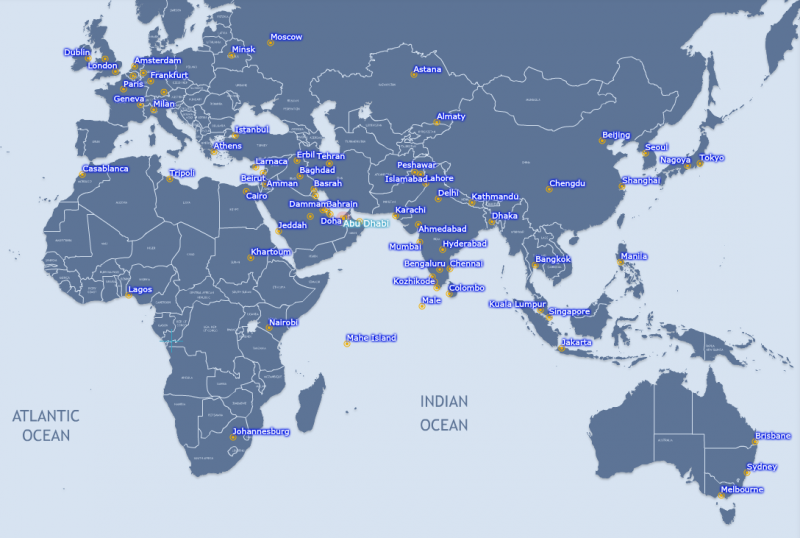 Etihad currently operates a daily two-class A320 services between Abu Dhabi and Nairobi, offering about 950 seats a week. The carrier also operates an A330 freight service on the route four times a week, as well as a Boeing 777 freight service from Nairobi to Amsterdam three times weekly.

Both carriers point to the agreement paving the way for greater collaboration, focusing in particularly on joint ground handling, line and heavy maintenance, training and cargo operations.

Etihad CEO, James Hogan, said the partnership with Kenya Airways “is in line with our strategy of forming alliances with airlines around the world to enhance our network and marketing reach”.

Etihad operates a network of 86 passenger and cargo destinations in the Middle East, Africa, Europe, Asia, Australia and the Americas. Mr Hogan says the carrier has more than doubled its services to Africa in the last five years.

Etihad, like Emirates and Qatar Airways, is attracted by the continent’s economic growth, largely being driven by rising demand for commodities and higher prices, particularly from emerging markets in Asia. In the absence generally of a strong African aviation industry, the Gulf carriers are able to exploit the geographic position of their home hubs to conveniently move traffic between Asia and Europe as well as south to Africa.

Economic growth for the entire African continent is expected to have recovered to 5.1% in 2012, after slumping to 2.7% in 2011. Growth is forecast to be maintained at 5.2% in 2013, according to the United Nations Department of Economic and Social Affairs. Eastern Africa in particular is forecast to post stronger growth of 6.3% in 2012 and 5.8% in 2013.

Kenya Airways joins the powerful family of Etihad allies, with the SkyTeam cross-over too

Etihad and Air France-KLM formed an alliance in Oct-2012 as part of a tripartite commercial agreement with airberlin, in which Etihad holds a 29% shareholding.

The union was the second of three announcements in quick succession by the Gulf carriers that established Etihad, Emirates and Qatar at the centre of a new global world order. Emirates revealed its plans for its global alliance with Qantas in Sep-2012, while Qatar announced the intention to join oneworld, to make it the first of the trio to align itself formally with a marketing alliance.

KLM, the Dutch national carrier, has also held a 27% cornerstone stake in Kenya Airways since 1995, making it the airline’s next largest shareholder after the Kenyan Government with 29%.

See related article: Etihad ties up with Air France-KLM; next Qatar-oneworld and the aviation world turns on its head

Under the partnership Kenya Airways will launch a three weekly service from Nairobi to Abu Dhabi. It currently flies daily to Dubai using 767-300 aircraft.

Kenya Airways is Africa’s fourth largest carrier and the continent’s only member of the SkyTeam alliance, joining in 2010. The carrier will be Etihad’s 42nd codeshare partner which will now boast a combined passenger network of 349 destinations, more than any other Middle East carrier, according to Mr Hogan.

Kenya Airways is pursuing an aggressive and ambitious 10-year growth plan which revolves around building its Nairobi hub as an African gateway for traffic to and from Asia, particularly China as well as India.

The airline operates a fleet of 38 aircraft and has 31 aircraft on order for delivery over the next three years, including three Boeing 777-300ERs, expected to arrive from Oct-2013, and nine Boeing 787-8 aircraft to be delivered from 2014. The fleet growth is expected to allow the carrier to add three new points outside Africa each year, while also expanding its intra-Africa network.

One of the first foreign airlines to commence air service to China, Ethiopian now operates to four points there and plans to expand its Asian network with the addition of Ho Chi Minh City, Manila and Seoul Incheon from 18-Jun-2013. South Korea, Vietnam and the Philippines are all growth markets for Africa.

Emirates operates to 21 African destinations, covering almost every key point on the continent. Emirates also codeshares with South African Airways, as well as with Air Mauritius on its flights to Dubai.

Etihad has also been growing its capacity, but provides just 11,000, while the third Gulf carrier, Qatar, offers about twice that number with nearly 22,000 seats. Qatar does not have an African-based codeshare partner.

Kenya Airways’ alliance with Etihad has given it a valuable leg up in its hub contest with rival Ethiopian, greatly enhancing its access to all points eastwards. The partnership should result in a significant increase in traffic to and from its Nairobi hub and will allow the carrier to fast track its plans to offer more services to Asia. For Etihad too, this represents an important foothold in the valuable and generally more stable eastern Africa.

However there are concerns that Kenya’s general elections on 04-Mar-2013 will see a repeat of the violence that marred the process five years ago. Controversial presidential candidate Uhuru Kenyatta, challenging incumbent Prime Minister Raila Odinga, has been summoned to appear before the International Criminal Court in The Hague, charged with crimes against humanity for his role in orchestrating post-election tribal violence five years ago in which more than 1,100 people were killed.

The United States has warned that Mr Kenyatta’s election would have diplomatic consequences. It could also lead to widespread upheaval in the country, damaging its booming economy. This in turn could damage Nairobi’s vision of becoming a continental gateway.